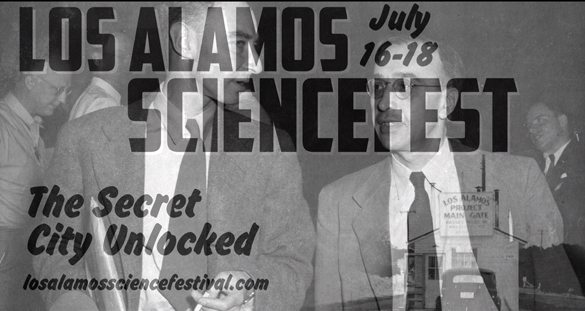 Visitors will have a chance to unlock the mysteries behind the former secret city of Los Alamos July 15-19 during the eighth annual Los Alamos ScienceFest.

Los Alamos ScienceFest, the town’s signature annual event, is themed “the Secret City Unlocked” in recognition of the recent designation of the Manhattan Project National Historical Park and popularity of the WGN hit TV series “Manhattan.”

Most events during ScienceFest will be centered around the town’s once enigmatic history of the Manhattan Project and includes five days of family friendly events including a “Drone Zone” competition, speakers, a “Science of Beer” event, release of two apps created by LANL scientists, tour of historic buildings, and more.

“Los Alamos ScienceFest celebrates the town’s relationship between science and creativity with engaging exhibits, events and demonstrations,” said Los Alamos MainStreet Executive Director Suzette Fox. “Our town has earned a reputation as a hot bed of activity in science, biotech, engineering and medicine. Los Alamos ScienceFest provides an opportunity for the community to take pride in that reputation and to inspire the next generation to carry it forward.”

ScienceFest events begin Wednesday, July 15 at Ashley Pond Park with a performance by Zulu Prince Zizi Zuko Pokwana ka Menziwa, Aah Jongisilo and the South African musicians/dancers, Ibuyambo Cultural Ensemble at the Ashley Pond stage followed by a screening of the 80’s hit, “Back to the Future” as part of Movies in the Park.

To commemorate the date and time when the actual Trinity Site test took place 70 years ago, the Los Alamos Historical Society will begin sharing diary entries at 4:30 a.m. Thursday, July 16 via Twitter from the diary of a meteorologist who witnessed the actual test. Tweets will be done at the former home of physicist Hans Bethe, now called the Bethe House. Tweets can be read as they happen at: @losalamosmuseum.

From July 16–18, hour-long historic tours led by the Los Alamos Historical Society will be offered at 10 a.m., 11 a.m., 2 p.m. and 4 p.m. Cost is $10 per person. Meet at the Los Alamos Historical Museum. July 17, 11 a.m. to 1 p.m. and 2-4 p.m., two historic buildings will be opened, offering an exclusive glimpse at life for scientists during the Manhattan Project era. Those buildings include the Christian Science building, formerly the dormitory for the Women’s Army Corp.; and the Los Alamos Little Theater, formerly a military mess hall (cafeteria) during World War II.

The Los Alamos Little Theater also will feature a live, 25-minute performance of a stage play written by Los Alamos native, Robert F. Benjamin, titled “Sunrise at Otowi Bridge.” The one-act play is based on the life and times of Edith Warner, the nearest neighbor whose home is said to have been located closest to where the world’s first atomic bomb was being built. Chocolate cake will be given out by Ruby K’s Café in honor of Warner, whose home seconded as a tearoom. The play takes place at 1 p.m. and again at 3 p.m. on both July 17 and 18. There is no charge.

The newly opened Bathtub Row Brewing Co-op will serve up a slew of trivia questions about Los Alamos at “Science Trivia Night,” Thursday, July 16. The brewery will have beer-making demonstrations and delve into the science of brewing on Friday, July 17 at the brewery, and serve their new ScienceFest Pale Ale, specially made for the ScienceFest at the beer garden located at Ashley Pond.

Friday, July 17, hear from several fascinating speakers at Fuller Lodge who will shed light on life in Los Alamos during the Manhattan Project era, whether from personal experience or research. The speakers will begin at 3 p.m. and continue throughout the afternoon until 7 p.m. Also July 17, the Stooges Brass Band will bring their energetic jazz sounds to Los Alamos during the ScienceFest Summer Concert 7-10 p.m. at the Ashley Pond Stage.

July 18 – Festival Day – LANL scientists will release two brand new applications (apps) to the public. The first is a 3-D app, allowing the operator to see what the town looked like during the Manhattan Project era. The second is a GLIF app, which is a cross between geocaching and gaming where users will earn points by visiting specific markers around town. There is no charge for either app.

Anyone wishing to create their own apps for their iPhone using Global Positioning System (GPS) data can take a free three hour course beginning at 11 a.m. July 17. The app class is at Time Out Pizza, located at 1350 Central Ave. #101.

New to ScienceFest this year, the “Drone Zone” will be held 11 a.m.–3p.m. on July 18, featuring a “masters” course where experienced drone pilots can bring their own drones and compete in an agility course. The pilot with the highest score will win a drone. Beginners and children can see demonstrations and test out mini drones, with a chance to win one.

ScienceFest organizers are asking anyone with vintage 40’s era cars to bring them to the ScienceFest, and are encouraging visitors to wear clothes from that era. Actors in costume will walk around Ashley Pond 11 a.m. to 6 p.m., July 18.

Live music by DK and the Affordables and Kodamatrio will be on tap at the beer garden July 18 along with handcrafted brews by four breweries.

Students participating in Festival Day July 18 will have a chance to experience hands-on activities and see amazing science experiments 11 a.m. to 3 p.m. from Explora and others.

Rocket Day, one of last year’s premier ScienceFest events, has been moved to a new location and a new day (Sunday, July 19) to make room for bigger rockets and explosions in Federal Aviation Association (FAA)-cleared air space down the hill from Los Alamos, just north of Española. Visit the website for details and extend your stay just one more day for this finale!

A complete list of additional workshops, events and activities during Los Alamos ScienceFest can be found by clicking on “Event Schedule” on the main site at losalamossciencefestival.com/.