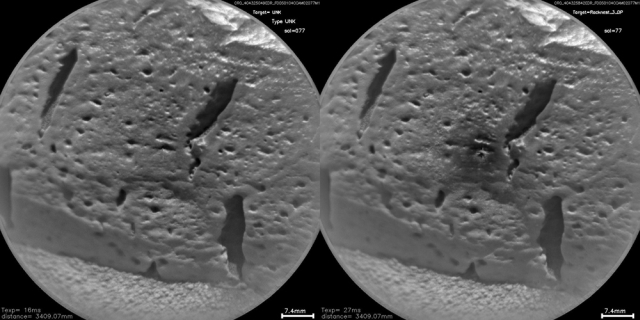 This dual image of a Martian rock taken by the ChemCam instrument aboard the Curiosity rover shows a rock at the “Rocknest” area on Mars before it was interrogated with ChemCam’s high-powered laser (left) and after interrogation by 600 laser blasts (right). The crosshairs in the darkened portion of the image at right shows where the laser beam penetrated to a depth of at least 1 mm as a result of the repeated shots. The ChemCam laser vaporizes a small amount of material that can be read by a spectrometer to determine the target’s composition. Los Alamos National Laboratory postdoctoral researcher Nina Lanza is studying whether Martian rocks are coated with dust or some other substance, and she presented her research at the 44th Lunar and Planetary Science Conference at The Woodlands, Texas. Courtesy/LANL

THE WOODLANDS, TEXAS—When it comes to examining the surface of rocks on Mars with a high-powered laser, five is a magic number for Los Alamos National Laboratory postdoctoral researcher Nina Lanza.

During a poster session today at the 44th Annual Lunar and Planetary Science Conference at The Woodlands, Texas, Lanza described how the laser-shooting ChemCam instrument aboard the Curiosity rover currently searching the surface of Mars for signs of habitability has shown what appears to be a common feature on the surface of some very different Martian rocks during Curiosity’s first 90 days on the Red Planet.

But exactly what that common feature is remains an intriguing mystery—and one that Lanza intends to solve.

The ChemCam instrument uses an extremely powerful laser to vaporize a pinpoint of rock surface. The instrument then reads the chemical composition of the vaporized sample with a spectrometer.

The highly accurate laser can fire multiple pulses in the same spot, providing scientists with an opportunity to gently interrogate a rock sample, even up to a millimeter in depth.

Many rocks are zapped 30 to 50 times in a single location, and one rock was zapped 600 times.

Members of the ChemCam team generally discard results from the first five laser blasts because of a belief that after the first five blasts, the laser has penetrated to a depth that provides a true representative sample of rock chemistry.

Instead of tossing out those data, however, Lanza looked at them specifically across a diverse set of Martian rocks. She found that the first five shots had chemical similarities regardless the rock type.

What’s more, after five shots, like other scientists had noticed, the spectrum from the vaporized rock stabilized into a representative sample of the rock type below.

“Why is it always five shots?” Lanza wondered.

It could be the first five shots were reading a layer of dust that had settled onto the surface of every rock, but results in laboratories on Earth seem to indicate that the first laser blast creates a tiny shockwave that is very effective at clearing dust from the sample.

Therefore, if the first blast is dusting off the rocks, the remaining four blasts could be showing that Martian rocks are coated by a substance, similar in structure if not composition, to the dark rock varnish appearing on Earth rocks in arid locations like the desert Southwest.

“The thing about rock varnishes is the mechanism behind why they form is not clearly understood,” Lanza said. “Some people believe that rock varnish results from an interaction of small amounts of water from humidity in the air with the surface of rocks—a chemical reaction that forms a coating. Others think there could be a biological component to the formation of rock varnishes, such as bacteria or fungi that interact with dust on the rocks and excrete varnish components onto the surface.” Lanza is quick to point out that she’s making no concrete claim as to the identity or origin of whatever is being seen during the first five shots of each ChemCam sampling. The common signature from the first five blasts could indeed be entirely surface dust, or it could be a rock coating or a rind formed by natural weathering processes.”

As the mission progresses, Lanza hopes that integrating other instruments aboard Curiosity with ChemCam sampling activities could help rule out unknowns such as surface dust, while careful experiments here on Earth could provide crucial clues for solving the Martian mystery of the first five shots.

“If we can find a reason for this widespread alteration of the surface of Martian rocks, it will tell us something about the Martian environment and the amount of water present there,” Lanza said. “It will also allow us to make the argument that what we’re seeing is the result of some kind of current geological process, which could give us insight into extraterrestrial geology or even terrestrial geology if what we’re seeing is a coating similar to what we find here on Earth.”