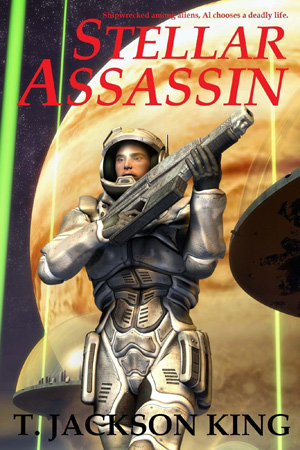 The number rankings are adjusted hourly, so the book may go up or down depending on Kindle e-book downloads of the title. The book was only released March 9, so it has climbed to this rank very quickly.

Here’s a plot synopsis of Stellar Assassin Al Lancaster is a shipwrecked tech scavenger who wakes up from Suspense on the auction block of Hercules Station in the alien-run Markan star system, light years distant from Earth.

The only human in a star-traveling culture where ancient Guilds of Trade, Assassins and Spies train solo beings to serve alien masters, Al finds that survival depends on his human predatory instincts. He becomes an industrial thief, bounty hunter and sometimes “hit man” for alien merchants, a job that deeply troubles him as a Zen Buddhist.

Hope flares briefly when he falls in love with the alien cat-woman Delo Quar Anken, only to see her kidnapped by a sadistic alien merchant.

But Al vows to survive, even when he is faced with his greatest challenge—to carry out a “hit” on the Messiah of Death, a plasma cloud alien that literally cannot be killed.

The novel is available in e-book or paperback formats at http://www.amazon.com/Stellar-Assassin-T-Jackson-King/dp/1617206555/ref=tmm_pap_title_0 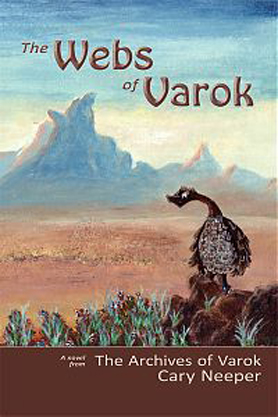 The second book in Cary Neeper’s series “Archives of Varok,” The Webs of Varok, has been selected as a science fiction finalist in the ForeWord Reviews 2012 Book of the Year Awards.

The awards recognize outstanding books from independent and academic presses.

The Webs of Varok was selected as a finalist in the Science Fiction category. Over the next two months, ForeWord’s panel of 60 judges, librarians and booksellers will determine the winners of Gold, Silver, and Bronze awards in each category, as well as Editor’s Choice Prizes for Fiction and Nonfiction.

Winners and ForeWord’s Independent Publisher of the Year will be announced at the American Library Association Annual Conference in Chicago, June 28.

To celebrate the nomination, Neeper is offering a chance to win two books on her website for the most thoughtful comment about the one of two issues from the book: balancing consensus with regulation in the steady state and human sexuality–Tandra faces hers.

Visit http://caryneeper.com to enter or to learn more about the series. The first book in the series is A Place Beyond Man.

The series takes place in the not-too-distant future as Earth faces ecological disaster. It follows microbiologist Tandra Grey as she meets fellow inhabitants of our solar system, not previously encountered.

The Webs of Varok continues her adventures as Tandra travels to Varok to learn how the Varokian society has developed a sustainable lifestyle and to bond with her new family, which includes two alien members.

Look for an interview with Neeper and a review of the series in an upcoming Pajarito Reads column.