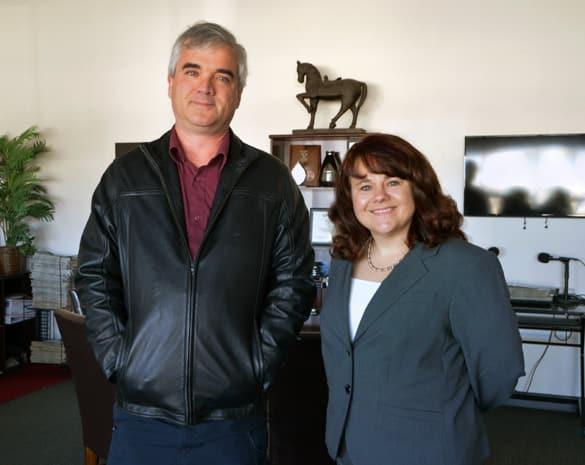 Luchini assumed the position of chair Monday following the resignation of Elizabeth Hanes. He had previously served as vice chair of the organization, which it was announced in June had met the requirements to qualify as a Major Political Party in the state, beginning with the 2018 election cycle. Luchini appointed Milenski to serve as his vice chair Wednesday.

Luchini and Milenski visited the Los Alamos Daily Post Saturday to discuss their new leadership positions at the state level.

“Right now, we are in an election year and our primary focus is to provide support to Libertarian candidates at all levels,” Luchini said. “I am excited to assume leadership of this Party during an historic election cycle in which our organization will be competing as a Major Party. We expect to field a number of candidates for state and federal office. As New Mexicans continue to switch their voter registration to Libertarian at a record pace, we aim to give them candidates they can support with enthusiasm and a clean conscience.”

Luchini has been registered as a Libertarian voter since the mid-1980s, and has been active in Libertarian politics since then in various states such as New Mexico, California and Illinois. While vice chair, Luchini coordinated the accumulation of voter data bases to allow for an efficient campaign for 2017 and 2018 election cycle candidates.

He grew up in southern New Mexico and holds a PhD in High Energy Physics. He worked for NASA and Los Alamos National Laboratory before launching his own businesses including a green energy business in Texas and a specialty software business for governmental agencies among others.

Luchini and Milenski explained that the Libertarian Party stands for individual freedom and responsibility. In New Mexico, the party advocates defending and expanding civil rights; eliminating government regulations that stifle economic growth; and lowering or eliminating taxes of all kinds. The Libertarian Party of New Mexico also is opposed to any restrictive immigration reform measures and supports the free movement of law-abiding citizens throughout the region.

The Libertarian Party is the fastest-growing political party in New Mexico, and the organization estimates the number of registered Libertarians in the state grew by at least 40 percent in 2017, Luchini said, adding that approximately 7,200 New Mexicans are now registered as Libertarians.

In a reversal of roles at the local level, Milenski serves as chair of the Libertarian Party of Los Alamos and Luchini is her vice chair.

Milenski was born in Kansas and moved with her family to Santa Fe when she was in high school. She attended Los Alamos High School and graduated in 1993. She is married and has two children. Milenski returned to school in 2013 and earned an associate degree in engineering from UNM-LA. During that time, she garnered six scholarships and two internships. One of the internships was at LANL and turned into a fulltime position as a Tech 4 in Chemistry in the Chemistry, Chemical Diagnostics and Engineering Division.

Milenski said there is a lot of misunderstanding about what libertarianism actually is and she welcomes people to contact her with questions.

“We hold hands with both Parties … we stand for fiscal responsibility and social acceptance and today that notion is very attractive,” she said. “I grew up believing in personal freedom and believe personal freedom is much better than government overreach … I believe the best solution to any problem is the one that involves the most freedom. I am easy to talk to … contact me on Facebook or through our webpage and let’s grab a beer or coffee and talk about it.”

Milenski and Luchini spoke about bumper stickers that get to the heart of their Party: