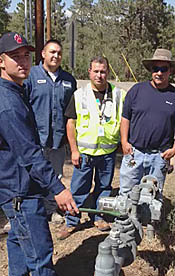 The Los Alamos Middle School construction project has had to hurdle over some obstacles including contractor conflicts and a gas line leak. Now, the project has encountered a rocky situation – literally.

David Wharram of Gerald Martin, which serves as the owner representative for the project, explained to the Los Alamos Public Schools Board of Education during its regular meeting Tuesday night that as the bus loop at the school is being created, workers have uncovered rock on the east side of the loop.

According to the construction report presented at the meeting, the rocky terrain is putting completion of the bus loop project about five weeks behind schedule.

The board initially decided not to spend $300,000 to remove the rock and instead provided surveys to the contractor, McCarthy, that showed where rock was located and where it is not, Wharram said. Now, the board needs to decide whether to negotiate with McCarthy on the $120,000 estimated cost to remove the rock.

Wharram said that McCarthy has already completed $40,000 worth of work on the rock removal, which involves chipping at the rock. It is not, Wharram said, “the whole cost of digging the trench.”

The board agreed to direct Superintendent Gene Schmidt to have LAPS negotiate with McCarthy and bring a dollar amount back to the board for consideration.

Board member David Foster asked if LAPS would be accountable for some of the amount, “It’s not a question of zero cost,” he said.

Wharram said the school district would need to pay for the rock removal, adding that it would be the most economical thing to do.

“We are getting the best value for the district,” he said.

Board Secretary Melanie McKinley said she was concerned with meeting the tight timeline to finish the school project in order to move the portables over to Aspen Elementary School. She asked Wharram if he could assure that the portables would not be relocated until it is known that the middle school is ready for occupancy.

Wharran said he could do that.

Despite the number of hurdles that have been encountered during this project, Wharram said the middle school “has been very generous and patient with the construction.”