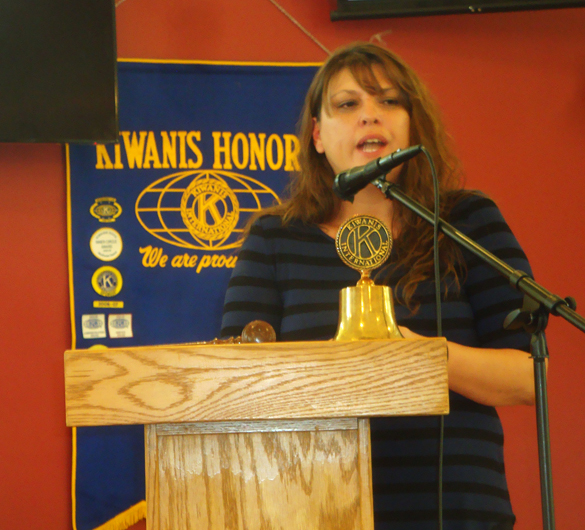 However, it was obvious July 14, as she spoke to the Kiwanis Club of Los Alamos, that she cares deeply about her work.

In a brief interview after her talk, she said that she grew up in an area  “riddled by drugs and crime” (although her immediate family didn’t do drugs or drink), and she wanted to “help people get out of that life.” In addition, she was deeply affected when one of her cousins who had just come back from serving in the military was hit and killed by someone who was driving while intoxicated.

She began her career working at the Clovis jail; earned a bachelor of science degree in criminal justice administration; and worked for the New Mexico Department of Corrections in Gallup and Española before moving to Los Alamos, where she works directly for the county. She has been here four years now. Kiwanis member Cheryl Pongratz, who introduced her at Kiwanis, said that she has “brought a really high level of professionalism to Los Alamos.” There has been a “major change in attitude,” since Peña arrived here, she said. “We are so lucky to have someone in town who watches out for us.”

In Los Alamos County, she said, the No. 1 problem that brings people to her office is driving while intoxicated—but drug problems, property crimes, and domestic violence cases are all going up. In addition, she said, heroin use and opium use in Los Alamos County are increasing.

Summarizing her approach to her work, she said, “I’m tough, but I’m fair.”

Since she has been here, she has instituted a written procedure and electronic monitoring, she said. She keeps track of her charges with ankle bracelets that use GPS to track probationers, and with “sober links,” monitoring people who might be drinking. She is keenly aware that it costs the county $180 for every 24 hours that a prisoner spends in jail. Probation costs far less. As a result, she estimates that she is saving the county thousands of dollars.

She holds people on probation to 13 “standard conditions”—such requirements as abstaining from drinking and drugs, staying away from people in trouble, and being completely honest in their discussions with her. She said that the recidivism rate among her probationers last year was about 60%, but she noted that a substance abuser frequently relapses seven to nine times before becoming clean. Age, she said, “is a huge factor.”

Asked the percentage of her cases that end in success, she said it stands at about 30 to 40 percent.

Nine out of 10 of the people she is tracking have substance abuse problems, she said. She added, “I also see a lot of mental health issues.” She works with people ranging from age 18 to over 60.

Asked what it is that provides her with “satisfaction” in a job with many challenges, she said, “Knowing I’ve stopped that four-times DWI offender from killing somebody.” She added, “I have some really good success stories.”

She said, “If you hold people accountable for those ‘few beers,’” sometimes you can make a major difference. “It’s an amazing thing,” she said, “when you can get that lifetime alcoholic to turn around and find his life is better.”