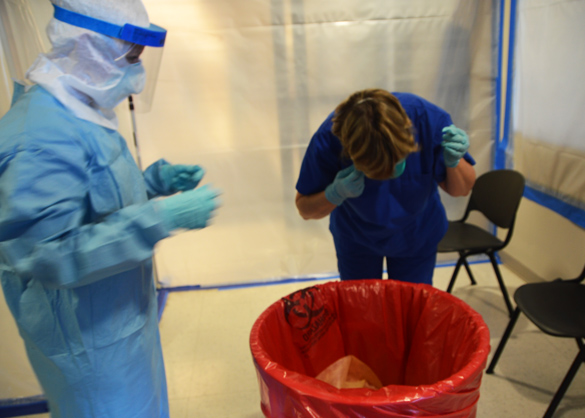 Bathed, brushed and well-fed, these Pomeranians are on the mend at the Los Alamos County Animal Shelter following their ordeal as hoarder victims. Photo by Carol A. Clark/ladailypost.com 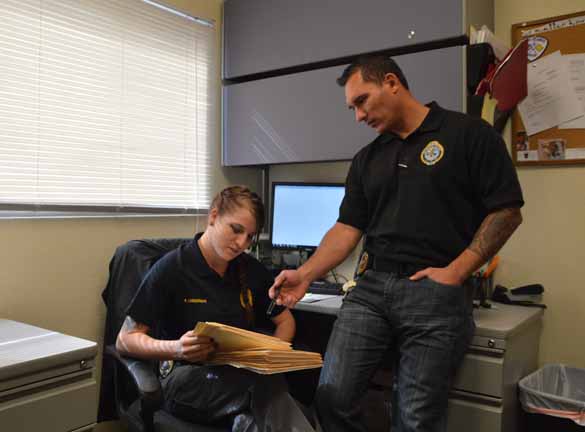 Public Safety Aide Alysha Lenderman reviews files with Deputy Police Chief Jason Wardlow Herrera Friday at the Los Alamos County Animal Shelter. Photo by Carol A. Clark/ladailypost.com
By CAROL A. CLARK
Los Alamos Daily Post
Something just didn’t seem right at a home on Fairway Drive in Los Alamos. A caller requested a welfare check Sept. 24 on the homeowner who hadn’t been seen lately.
Cpl. David Boe arrived at 4178 Fairway Dr., and spotted 5-6 Pomeranians in various stages of illness; their fur severely matted, some limping, others having difficulty breathing and no food or water in sight.

Cpl. Boe called Public Safety Aide Alysha Lenderman to the residence and they eventually discovered 16 Pomeranians. Los Alamos Animal Control has charged homeowner Cindi Mills, 58, with 33 counts including animal cruelty, failure to vaccinate and failure to remove excrement, according to a police report.

Lenderman explains in the police report that a pet sitter arrived at the home Sept. 24 and told Boe, and Cpl. Sheldon Simpson who had arrived at the scene, that Mills had been hospitalized. The sitter said she was there to try to care for the dogs because when her mother, the original pet sitter, entered the home she immediately became physically ill.

Magistrate Judge Pat Casados provided verbal approval for the officers to remove the dogs from the home and transport them to the Los Alamos County Animal Shelter.

Lenderman and Sheldon donned full body overalls and face masks. The pet sitter unlocked the door; the officers entered and saw clutter and debris piled throughout the home, dog feces covering the linoleum and carpet and urine soaked carpeting that was “squishy” under the officer’s feet, according to the police report.

Rodent excrement covered every surface inside the home, and according to the police report, the infestation was so severe that mice were jumping on the officer’s back and feet as they collected the dogs for transport.

The decay of the home did not happen over a few days but rather is the result of a situation that has gone on for a long period of time, according to the report.

One Pomeranian was discovered in a locked closet with no access to food or water. A dog door allowed the other 15 dogs access to the outside. A 15-year-old dog was in congestive heart failure. He later was humanely euthanized.

Once the dogs were settled at the Shelter, Lenderman formed a “Pom Squad” of local volunteers to help care for the rescued dogs. The volunteers include Tina Andres, Cindy Boe, David Boe, Kelli Guider, Bonnie Klein and Joy Nicholson.

“They have been amazing and we could not do this without them,” Lenderman said. “And our other dogs are receiving the same level of care because other volunteers have stepped up where needed.”

The dogs were separated into kennels in groups of four. Veterinary appointments were made at the two local animal clinics. The dogs had no tags so they needed rabies vaccinations. Lenderman emphasizes that it is a County ordinance that dogs have their rabies shot tags affixed to their collars at all times, adding that the vaccinations are only good for one year or three years and need to be updated.

Many of the Poms have required ongoing medication for their ailments and they all need special diets, she said. The volunteers feed each dog individually to ensure they are getting the proper amount of food. A daily journal is kept on each dog to ensure everyone knows their status. The volunteers also clean the kennels, exercise and socialize the dogs.

The average age of the rescued Poms is 7 years old. The youngest is 5 years old and the oldest is 10, except for Stevie, 15, who died.

“Since being in our care the dogs have become more social and playful … you can see the life in their eyes,” Lenderman said.

Deputy Police Chief Jason Wardlow Herrera explained that the Shelter staff could not function on a day to day basis without the Friends of the Shelter and their volunteers.

“They are improving the lives of the animals every day,” he said.

Wardlow Herrera commended the volunteers, staff and police officers involved in this case. He said Cpl. Boe and Animal Control Ofc. Lenderman have been returning to the shelter in their off duty time to help the volunteers walk the dogs and care for them.

“Their passion for the animals is so commendable … they have worked tirelessly to care for the Pomeranians,” Wardlow Herrera said. “We are all animal lovers … it’s not just a job for us … it matters greatly that the animals are well cared for and we work together to make that happen.”

“I want to acknowledge the staff who have done a great job, especially Alysha Lenderman in overseeing the Pomeranians, the Friends of the Shelter who are a great asset to us, and Tom Beyer for his assistance.” Aragon said. “I also want to acknowledge Deputy Chief Jason Wardlow Herrera who has helped us a great deal … it’s all for the safety of the public in Los Alamos County as well as the safety of the animals.”

Mills began rescuing Pomeranians several years ago from a rescue that takes in dogs from puppy mills and hoarding cases. Many of the dogs have microchips that show she rescued them from locations primarily in Arizona. In time, the situation at Mills’ home grew out of control. Officers found that she willfully or through negligence injured and mistreated these 16 Pomeranians by failing to provide food, water, veterinary care and clean shelter.

“When it comes to hoarding situations, often times the cruelty to the animals is unintentional,” Lenderman said. “People take on these animals with the intention of helping them and over time things get out of control and they become overwhelmed.”

Mills also has five horses that she keeps at the North Mesa stables that are attended to by a caretaker. A wellness check confirmed that they all appear to be healthy and well taken care of, however with Mills hospitalized at the moment, food supplies may become an issue.

Lenderman contacted Phil Carter with animal Protection of New Mexico in regard to their Equine Protection Fund. She made arrangements for all five horses to receive three months of food at no cost to Mills or the caretaker. For information on the Equine Protection Fund available for emergencies such as loss of a job or medical issues, visit APNM.org.

Anyone finding themselves in a situation in which they have too many animals to care for properly is urged to call the Los Alamos County Animal Shelter at 505.622.8222 for assistance or stop by the Shelter at 226 East Road.

The 15 remaining Pomeranians are in need of dental work, blood work and radio graphs to ensure their heart and lungs are in good condition, Lenderman said. The County is paying for the dogs stay at the shelter, the Friends of the Shelter are paying for the special diet and Lenderman is working on obtaining an emergency grant for ongoing medical expenses for the Pomeranians.

Donations to help with the expensive undertaking of caring for these Pomeranians may be made to Friends of the Shelter. The donations are tax deductible. Click here for information on donating.

Editor’s note: The 15 Pomeranians are impounded and remain part of this active case so the public is not allowed to visit them and adoption opportunities are not available at this time. 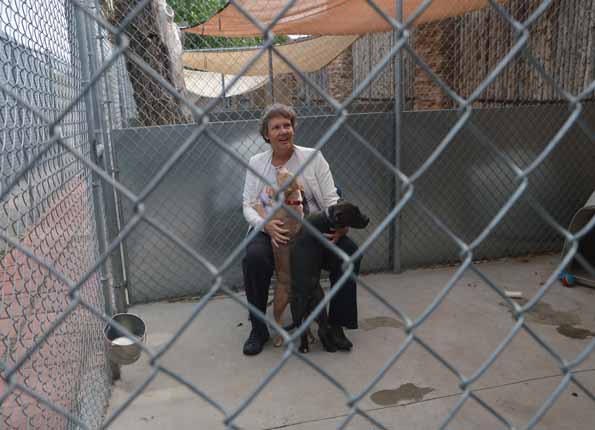 Pom Squad volunteer Tina Andres stops to hug a couple of puppies in one of the kennels Friday at the Los Alamos County Animal Shelter. Photo by Carol A. Clark/ladailypost.com 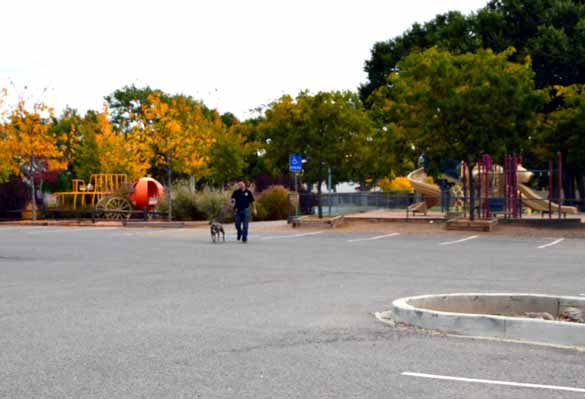 Los Alamos Deputy Police Chief Jason Wardlow Herrera heads back to the Animal Shelter Friday after taking Zuli for a walk. Zuli is an orphan being cared for at the Shelter. Photo by Carol A. Clark/ladailypost.com 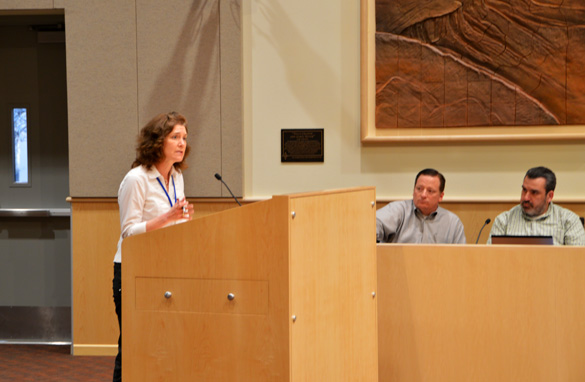 One of 16 Pomeranians rescued Sept. 24 from a hoarder situation at a home on Fairway Drive. Photo by Carol A. Clark/ladailypost.com 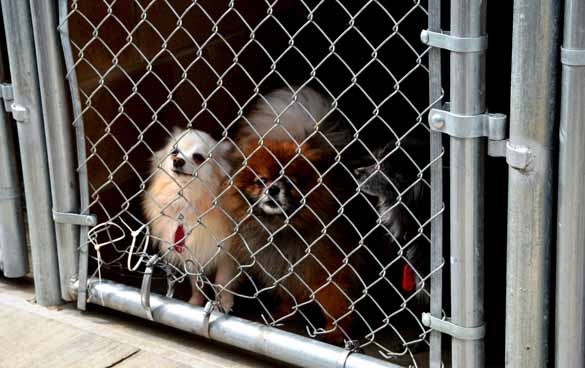