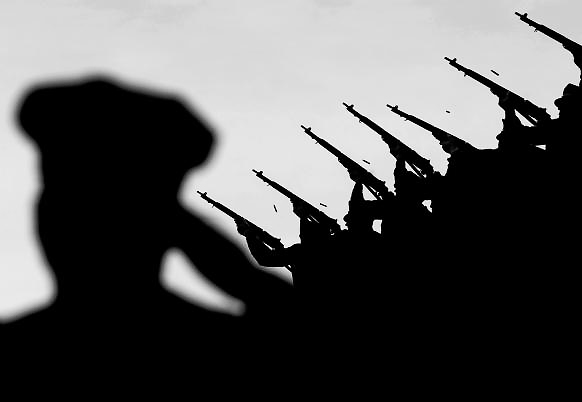 When Los Alamos police officers enter the law enforcement academy, they pledge to put their lives on the line to serve the public good.

When one of their own dies, whether from circumstances in the line of duty or otherwise, their funerals reflect honor and respect for the officer’s service and dedication.

From the moment local officers were informed that Cpl. Alfred Roybal, Jr. passed away Friday, Aug. 9, they began to follow the “Line of Duty Death” protocol. Their badges were covered with a mourning band that is worn from the date of death until midnight of the date of burial, which will be Thursday.

“A police officer has stood guard with Corporal Roybal 24 hours a day since his death,” Sgt. Jeremy Duran said. “Our officers have taken turns volunteering their time to stand guard around the clock … he has not been alone for one minute.”

Roybal, 36, a resident of Arroyo Seco, served as a police officer for the Los Alamos Police Department for 11 years and also served previously with the Taos and Santa Fe police departments.

Duran explained that when Roybal’s body was transported from Taos to the Office of the Medical Investigator in Albuquerque, a police escort accompanied him. A police escort also accompanied the body from Albuquerque to the funeral home in Espanola. Police from Santa Fe, Espanola, Rio Arriba and State Police have provided assistance throughout the process, clearing the way for the procession to pass through their towns, Duran said.

Santa Fe Police and State Police also are volunteering their time to participate in honor guard duties during the upcoming services for Roybal.

“State Police officers also will be in Los Alamos Thursday to take our calls from dispatch so our officers can attend Corporal Roybal’s funeral,” Duran said. “They received permission from their superiors to come to our community and assist during this difficult time. So many officers have stepped forward to help.”

In keeping with the LAPD’s demonstration of honor, unity and brotherhood at the funeral, the officers will dress in “Class A” uniforms, Duran said. There will be a procession comprised of dozens of police vehicles, a 21-gun salute, bagpipes, Color Guard, flag folding and a last radio call. The last radio call ends in, “gone, but not forgotten.”

“The funeral costs amount to several thousand dollars and there are so many other expenses the family has to bear in the weeks and months ahead before insurance and pension kicks in,” Duran said. “Our officers have told the family that they need not worry about any of it … one way or the other we will make sure the expenses are taken care of.”

“We hope the community will stop by LANB and donate to help this officer’s family,” Duran said. “Corporal Roybal served our citizens for 11 years … he was always happy and the first one there to mentor new officers. He conducted Officer Field Training for so many of our new officers including me when I first joined the department. He is going to be truly missed by the department for many things but most of all for how he cheered us up during our down times with his jokes. We just want to make sure that after all he has done for the department and the community, that now we all join together to help his family … I know he would have done the same for any of us.”

The public visitation for Roybal is scheduled to begin at 6:30 p.m. Wednesday, Aug. 14, at Northern New Mexico Community College with a rosary to be recited at 7 p.m. Mass of Christian burial will begin at 10:30 a.m. Thursday, Aug. 15, at La Iglesia de Santa Cruz de la Canada (off McCurdy Road.) Burial to follow at the Holy Cross Catholic Cemetery in Santa Cruz (off McCurdy Road.)