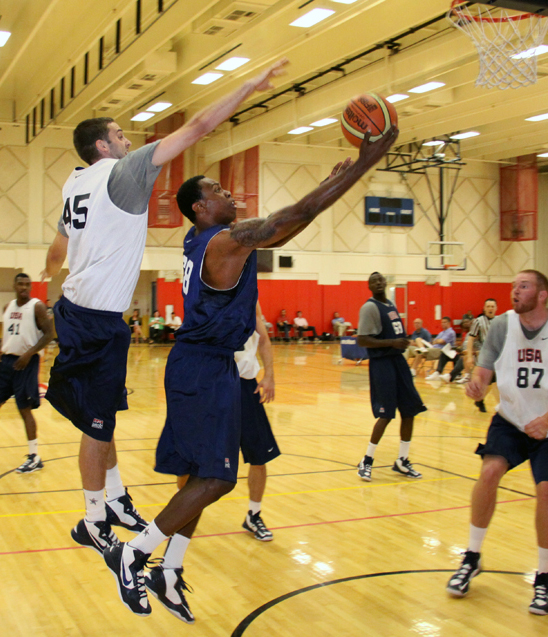 Training camp will continue in Colorado Springs through June 30, and the team departs for Russia July 1.

Representing the USA at the 2013 World University Games men’s basketball competition that will be played July 7-16 in Kazan, Russia:

Will Sheehey (Indiana/Stuart, Fla.); and

“Clearly versatility, we have guys that can play more than one position, that’s one of the great strengths we have,” said USA head coach Bob McKillop of Davidson College. “I think we shoot the ball particularly well from a number of positions, and we’ve got guys who want to be teammates. Those two things, to me, are the biggest advantages that we have, or the biggest strengths for our team.”

Eleven players took home end of the year conference honors, including McDermott, who was the Missouri Valley Conference Player of the Year and an all-conference first-team selection. Additionally, Kirk listed on the Mountain West Conference All-Defensive team, Ferrell was named to the Big Ten Conference All-Freshman Team and Sheehey earned Big Ten Sixth Man of the Year.

Following the preliminary round, the first and second-placed teams in each of the four pools advance to the medal quarterfinals on July 14 to compete for first through eighth places; while the remaining teams will play out for ninth to 24th places. The semifinals will be played on July 15, and the finals will be contested on July 16.

World University Games
The United States has claimed 19 medals in the World University Games since beginning play in 1965, and has captured a record 13 golds, three silvers and three bronze medals in the 20 WUGs in which a USA Basketball men’s squad has competed. The USA men own a stellar 138-9 record in WUGs play, and the U.S. captured six of the first seven gold medals awarded in the WUGs basketball competition, including six consecutive gold medals from 1989 through 1999. In 2001 the USA fell to host China, which featured half of its 2000 Olympic team, including Yao Ming, Menk Bateer and Wang ZhiZhi, by a single point in the semifinal and finished with the bronze. The USA again captured the gold medal in 2005 and most recently, finished in fifth place with a 7-1 record after falling to Lithuania 76-74 in the 2011 quarterfinals.