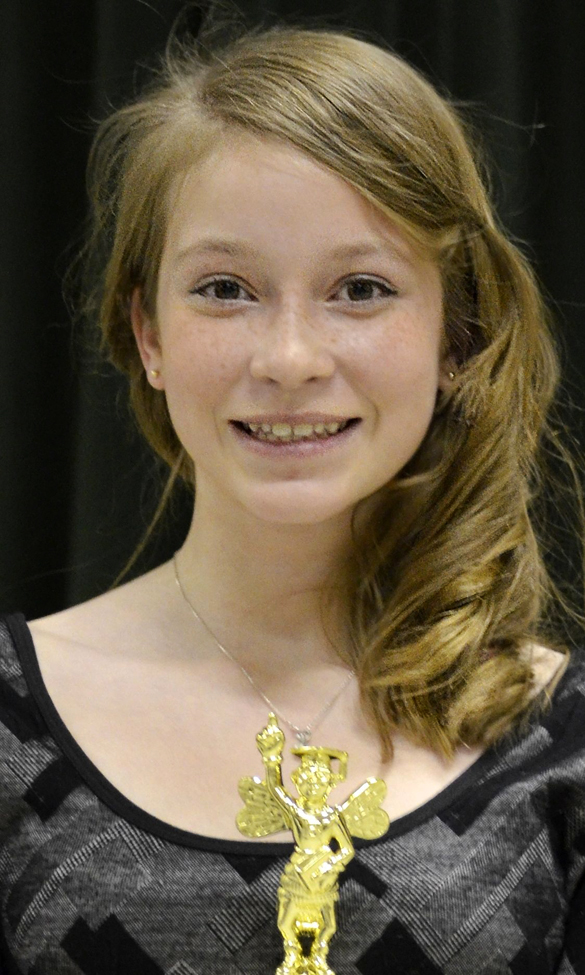 An eighth grade student at Los Alamos Middle School, Cullinan took second place in the Middle School Bee to advance to the County Bee, which she won with the word “hippopotamus.”

To prepare for the State Bee, Cullinan studied a list of more than 1,100 words provided by Scripps, the organizers of the national competition. The words are divided by language of origin, with helpful tips for typical spellings in each language. In addition, Cullinan worked on root words and combining forms in Latin, Greek, French, and German.

Forty-two students from 25 counties competed in the State Bee. The first 300 words were from the study list, and in round eight, with 13 participants remaining, the judges went to a new list of words that had not been provided to the contestants for study.

“Even with all the studying, sometimes you know every word in a round except the one you get,” Cullinan explained. “That’s just how it works.”

Cullinan was eliminated in round 10 on the word “pertinacious,” which means “stubbornly tenacious.” That round eliminated five of eight remaining spellers, who all tied for fourth place. Other missed words in that round included “hastilude” (a medieval joust) and “barbet” (a type of tropical bird). 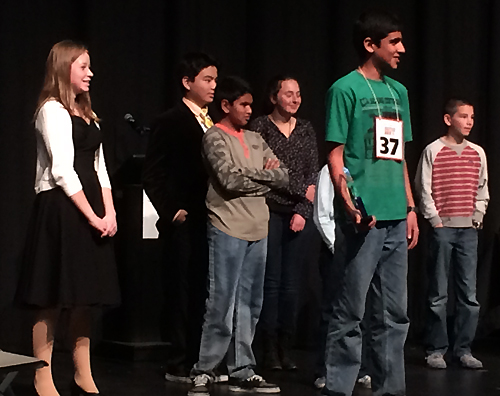 “Competitors realize that they’re not competing against each other, but the word they’re given,” Cullinan said. “Everybody was giving each other high fives and fist bumps every time we spelled a word right.”

Cullinan previously competed at the state level in 2012 as a fifth grader, when she was eliminated in the second round on the word “jeremiad” (a prolonged lamentation or complaint). Her stated goal this year was to get past round two, which she did with ease.

The words she was asked to spell were: rehearse, iguana, inselberg (an isolated mountain), coffle (a train of slaves or animals fastened together), exacerbate, rejoneador (a mounted bull-fighter), racket, indeterminate, and pertinacious.

There also were two oral vocabulary rounds in which contestants had to choose between two definitions of a word read by the pronouncer. Cullinan’s words in these rounds were “android” and “ominous.” The vocabulary rounds are relatively new to the spelling bee, first incorporated at the national level in the 2013-14 school year.

The winner, repeat-champion Anish Kumar from Desert Academy in Santa Fe, spelled “assay” (an examination and determination as to characteristics) and “tetra” (a small tropical fish) in the final round to finish the competition. He will represent New Mexico in the National Spelling Bee in Washington, D.C. in May. The New Mexico State Spelling Bee is sponsored by the Albuquerque Journal and The Education Plan.