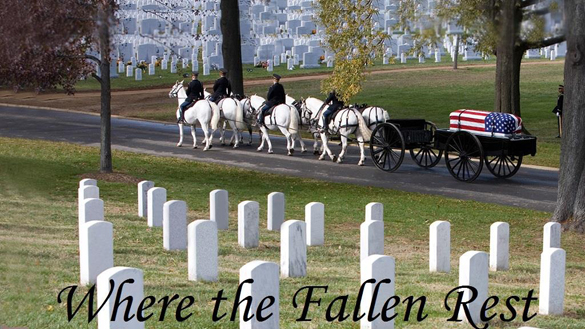 The event is hosted by the Veterans of Foreign Wars and local organizations, and the general public is invited to attend. The local theme is “Where the Fallen Rest.”

Memorial Day is a national holiday in the United States for remembering those who died while serving in the country’s armed forces. The holiday, which is observed every year on the last Monday of May, was formerly known as Decoration Day and originated after the American Civil War to commemorate the Union and Confederate soldiers who died in the war.

By the 20th century, Memorial Day had been extended to honor all Americans who died while in the military service. Traditionally, citizens visit cemeteries and memorials on Memorial Day to honor these brave soldiers, sailors, airmen and marines who died serving their county. American flags are placed on each grave in cemeteries across the country.

This year’s Guest of Honor and speaker is Col. Edmond Keith, USAF (ret). Colonel Keith served more than 20 years in the U.S. Air Force. He commanded the 320th Expeditionary Mission Support Group during Iraqi Freedom and is a current division leader for Maintenance and Site Services at Los Alamos National Laboratory.

We are also honored this year to have the Reverend Glenn Jones from the Immaculate Heart of Mary Catholic Church of Los Alamos, deliver the Invocation and Benediction. Reverend Jones served honorably as a captain in the U.S. Marine Corps.

The National Anthem and America the Beautiful will be sung by local talent Alicia Solomon, and Amazing Grace will be performed by Tristan Goodwin on the bagpipes. The Flag Corps and Three Volley Salute will be presented by the Los Alamos High School NJROTC, and a fly over by the Los Alamos Composite Squadron of the Civil Air Patrol.

The Pledge of Allegiance will be recited by David Murphy, Cadet Commander of the Los Alamos High School NJROTC with the Boy Scouts and Girl Scouts.  The State Proclamation will be read by Rep. Stephanie Garcia Richard, and the County Proclamation by Los Alamos County Council Chair Kristin Henderson. Taps will be performed by a member of the American Legion.

This is a joint community presentation organized by a variety of service organizations including the Veterans of Foreign Wars Post 8874, the American Legion Post 90, the Benevolent and Protective Order of Elks Lodge 2083, Knights of Columbus Assembly 0688, the Military Order of the World Wars Chapter 229, Daughters of the American Revolution, Ladies Auxiliary of the Veterans of Foreign Wars, Masonic Lodge 66, Boys Scouts and Girls Scouts of America, Los Alamos High School NJROTC, and a variety of other service organizations.