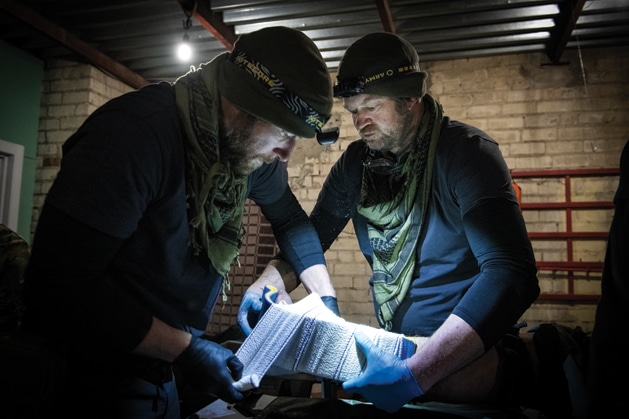 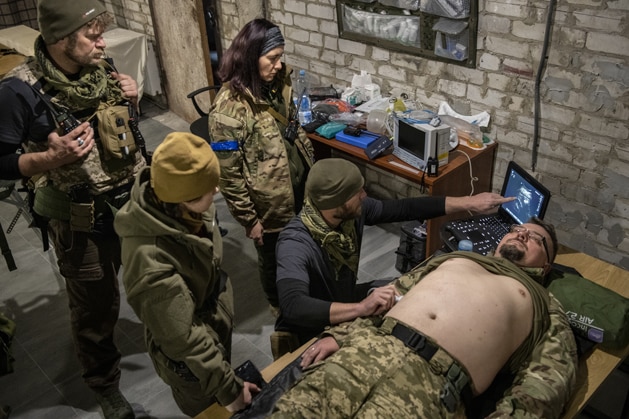 When a crisis occurs in the world, many people’s response is to watch the news, make donations or organize charity events. Locals Chris Hammond and Rollin Tylerr Jones do things differently. They purchase plane tickets and travel to the impacted area to help.

So, when the war ignited in Ukraine, Hammond, a Los Alamos Medical Center ER doctor, and Jones, a Santa Fe Fire Department firefighter, traveled March 4 to the country and spent the next month assisting the Ukrainian military with its trauma medical care services.

Jones explained he was familiar with the NGO. The world of organizations that go into active war zones is small, so he said he got to know the ones that did that kind of work.

It is not the first time Jones and Hammond have teamed up to offer medical aid to a country in crisis. In 2017, the two traveled to Mosul, Iraq to work with an organization called Global Outreach Doctors. Once the decision was made to assist Ukraine, they sprang into action, Hammond said.

“We packed bags with a bunch of medical supplies, booked flights on Tuesday and left on Thursday,” he said.

Jones said it was his paternal instincts that motivated him to go to Ukraine. He explained he has two daughters and whenever there is a crisis involving children, Jones said he feels an obligation as a father to help kids. Plus, if a similar situation happened in the U.S., he said he hopes someone would step in and do the same for his daughters.

“I try to make the world a better place and restore some faith in humanity,” Jones said.

Once overseas, Hammond said it took a while for them to be able to cross the border. At first, they helped people get to bus stations to be transported out of the country and delivered food to front line fighters.

Eventually they connected with a paramilitary medical volunteer battalion, which provided medical supplies to the Ukrainian army, Hammond said. They were put in the frontline team.

They first traveled to Leviv, which is a beautiful city, he said. Then they moved one to Kyiv, which was a different story. Hammond described it as desolate and heavily militarized.

While he isn’t exactly sure where they were eventually stationed, Hammond said it was about 3 kilometers from Bucha. He explained they had to turn off their cell phones’ location monitoring, travel in a darkened ambulance and set up their clinic in an abandoned office building.

He added that they would feel so helpless because they were so close to where all the fighting was happening, but they couldn’t go there to help. They slept in bullet proof vests and helmets, but they couldn’t fall asleep because bombs were going off and it was freezing, Hammond said.

Despite feeling helpless, the work they did was invaluable.

Hammond said they set up a trauma care unit to care for patients injured in the war zones and were on route to the hospitals.

“Tylerr and I had the most experience there … it’s kind of a whole stabilization operation we help developed,” Hammond said. “It was beautiful.”

The units “have everything you need to care for a trauma patient … (they) require a lot of stuff,” Hammond said.

In trauma care, the term “golden hour” is used, he explained. It refers to a patient having an hour to get care. So, stabilization units assisted with that deadline. The main thing is to control bleeding and get the patient to the hospital without losing more blood.

“I was hoping we would get to do this,” Hammond said. “We wanted to create something we could leave behind.”

Jones said he also pleased of the work they did in Ukraine.

“I am really proud … not a lot of people are experienced or trained in trauma or disasters (so) it feels good to go out in these situations with experience to teach and train soldiers and pass knowledge along…,” he said.

It also helped that their colleagues were excellent, Hammond said.

“The medical people we got to work with were beautiful,” he said, adding they were all professional healthcare workers who elected to stay in Ukraine and volunteer their services.

“Their whole life is medical care for their country for free … (these people) are doing it because they care,” Hammond said.

Hammond added that to be successful in a war zone “…the answer to everything you want to do is yes. It’s just figuring how to get there.”

The system they created was so successful that it caught the attention of a Ukrainian general who visited the trauma care unit. The general said, “these are amazing. I want you to make me one of these everywhere.”

Hammond praised not only his colleagues but the Ukrainian people.

Ukrainians “are tenacious”, he said. “They have beautiful hearts and I think that’s what keeps them going.”

He added that Jones and himself have kept in touch with their colleagues in Ukraine through texts and emails. Photos have been shared of ambulances with supplies. One man, known as Chet, said they were heading to the eastern part of the country.

Leaving Ukraine has been a mixed bag of emotions.

Crossing the border to return to the U.S. Hammond said he felt a weight lift and it feels nice to be back.

“I keep telling myself to remember what matters in life and not get sidetracked on the little stuff,” he said.

Jones added that he did feel guilt after returning to the U.S., but he continues to help. For instance, he knows a young girl who is trying to get a bilateral hip surgery and he is helping her get that surgery.

“So that helps make me feel like I haven’t quit the country,” Jones said.

“Los Alamos is incredible,” he said, adding that a lot of people have donated to HARP.

“I’m always blown away with how good people are here.”

“You can make a big difference …,” Jones said. “I’m super proud to be from Los Alamos. Every time I do a charity event, Los Alamos comes out and supports it.”

Not only are the two men thankful for this community but they are thankful to be able to work together. Hammond said Jones has a lot of experience as an ER trauma nurse.

He is “the most positive human being,” Hammond said. “(He maintains that) if we just keep moving forward, we will find what you are looking for.”

Jones said he also is thankful to work with Hammond.

“You couldn’t find a better person,” Jones said, adding that Hammond is focused, calm and a “huge asset anywhere he goes.”

For instance, Jones recalled that a building was bombed, and Hammond immediately said, “Let’s go help them.”

“I am super lucky I get to go out there with him,” Jones said.

In addition to Jones and Hammond, Stefan Wachs, a photojournalist in Santa Fe, traveled to Ukraine.

Going into areas engulfed in war or some other crisis leaves a mark, Hammond and Jones both said.

“Each one makes you expand a little more,” Hammond said.

As a result, you take more with you to the next assignment. However, Hammond said, “It’s dangerous; you don’t want to get comfortable in a war zone. There are terrible places, but they are filled with really good people.”

Leaving to go to war zones is hard on his family, Jones said, adding that there were a handful of times he felt he wouldn’t make it back. Still, “Whenever I have a chance to risk my life to save others, I’ll take it.”

Anyone interested in donating to HARP may visit https://www.harprescue.org/. 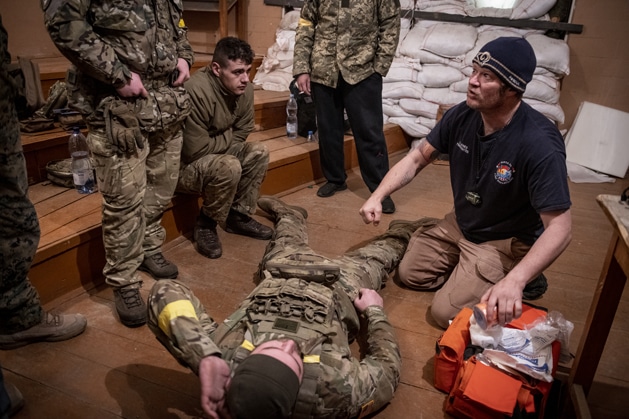 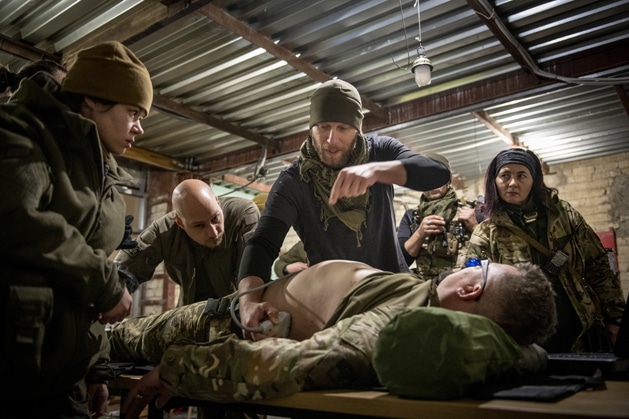 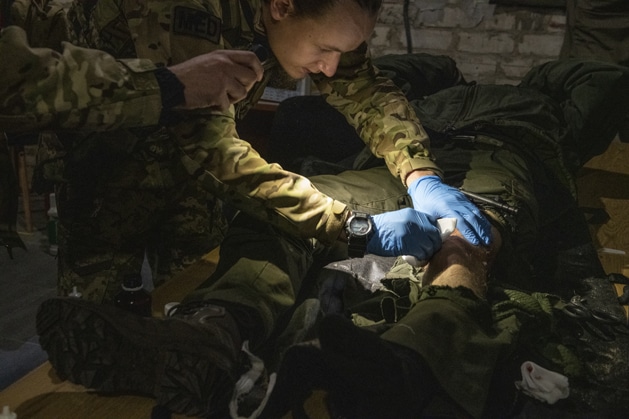 A patient receives treatment in Ukraine. Photo by Stefan Wachs 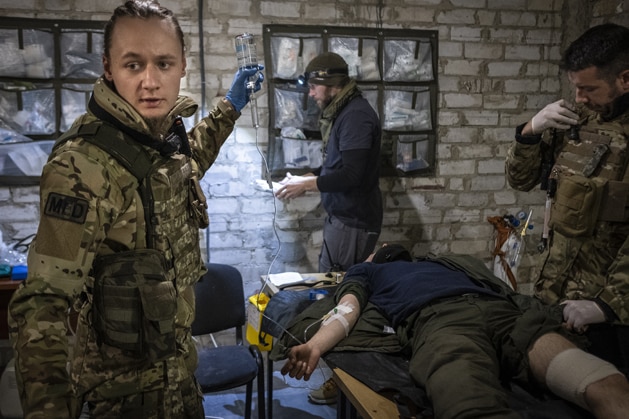 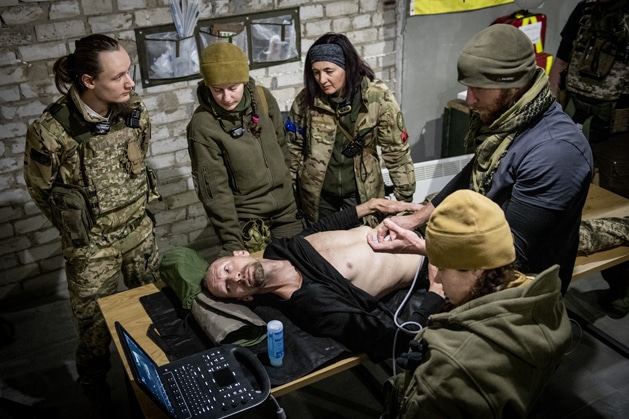 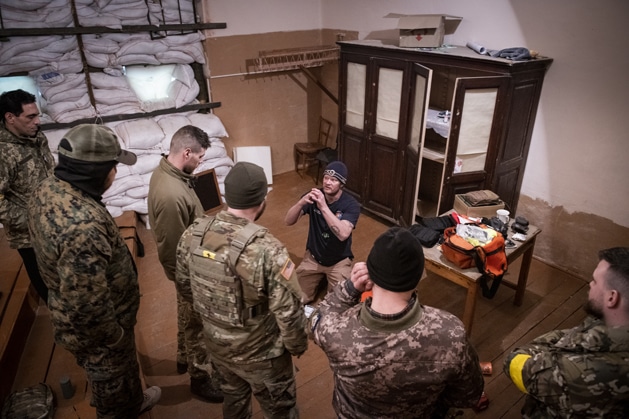