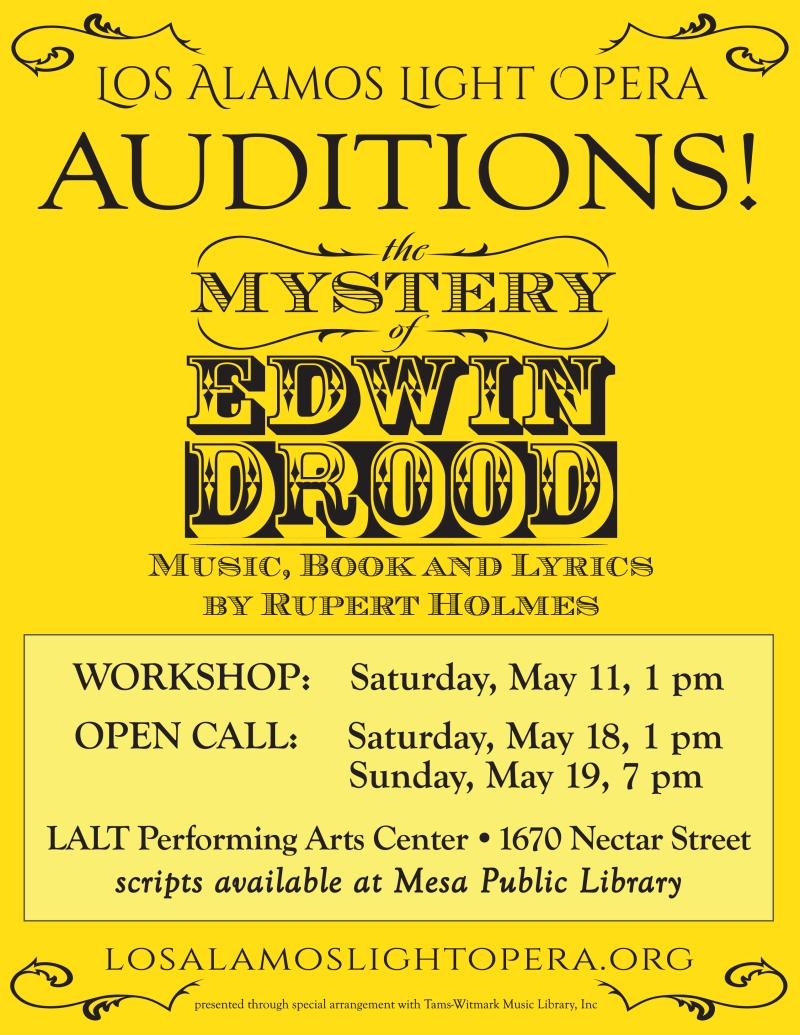 LALO News:
Los Alamos Light Opera announces its 2013 fall production: The Mystery of Edwin Drood, the musical murder mystery where the audience chooses the ending.
The community is invited to join in the fun at an informational Workshop introducing the play and its music this Saturday, May 11, from 1-3 p.m. at the Los Alamos Little Theatre Performing Arts Center, 1670 Nectar St. All kinds of talents are needed to bring the story of Drood to life on stage, including actors, singers, theatre technicians of all types, as well as instrumental musicians for the pit orchestra.
Workshop attendees will watch some video clips from other Drood productions, play group theatre games, and learn about the character roles, all in preparation for auditions to be held the following weekend. Those thinking about auditioning for a character role are urged to come to the Saturday Workshop to learn more about the play and meet the production team.
Auditions will take place the following weekend in an Open Call on Saturday, May 18, at 1 p.m. and Sunday, May 19, at 7 p.m., also at the Little Theatre. Those auditioning need only attend one of the two days listed and are asked to arrive promptly at the start time to fill out paperwork.
Auditions will consist of improvisational group theatre games, solo singing, and some group singing. Suggested songs for audition are listed by role on the Light Opera website and should showcase the vocal range and ability of the singer. Songs do not have to be memorized but should be prepared well enough for the singer to connect with the audience. Clearly marked sheet music in the correct key for the pianist should be provided by the singer, as well as their best British accent.
Additional audition times are available by appointment by contacting the director, Jess Cullinan, at jess.cullinan@gmail.com
Perusal scripts are available for check-out at the Resource Desk at Mesa Public Library and a breakdown of the character roles may be found on the website.
Rehearsals will begin the week of July 22 and performances will be at Duane Smith Auditorium the first two weekends in October, on October 4, 5, 6, 11, 12.
The Mystery of Edwin Drood, by Rupert Holmes, won the 1986 Tony Awards for Best Musical, Best Book of a Musical, and Best Original Score, and has just recently concluded a critically acclaimed revival run on Broadway. At its heart, Drood is a melodrama, with lots of audience participation and egging-on by the acting company. The story of the show is based on Charles Dickens’ unfinished novel of the same name, as performed by the Music Hall Royale, an 1890s London theatre company. Each actor plays two roles: their actor-self as a member of the Music Hall Royale, and their role in the story of Edwin Drood.
The show’s production staff includes director Jess Cullinan, producer Gwen Wiens, and stage manager Chris Monteith, with orchestral direction by Gretchen Amstutz, piano accompaniment from Brian Huysman, and choreography by Patrick MacDonald.
More information may be found at the Light Opera website: http://losalamoslightopera.org.
Menu
LOS ALAMOS