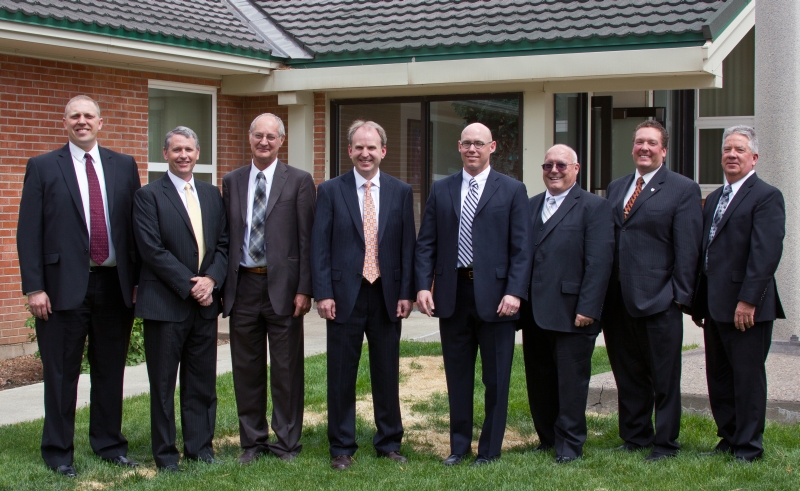 The local congregation of The Church of Jesus Christ of Latter-day Saints saw record attendance at Sunday’s worship service as members all met together for the last time while witnessing a historic day for the church in Los Alamos – a splitting of the ward.

Membership had grown to 603 members, including 110 in the children’s organization, and with approval of Church leaders in Salt Lake City, it was time for a change. Starting next Sunday, two separate congregations will meet in the same building at different times.

“We grow by dividing,” said Stake President Michael Zollinger, who presides over about a dozen LDS congregations in Northern New Mexico. “Today is a testimony of what it means to be a member of the church.”

Membership of each congregation is based on geographic location of residence. President Zollinger revealed the boundaries for the two new congregations, the Los Alamos Ward and Pajarito Ward, to members for the first time Sunday morning with lines on a projected map during the service.

The Los Alamos Ward divided once before in 1978 to form the Los Alamos and White Rock wards. Including the White Rock congregation, countywide membership today is about 1,000.

Also announced in Sunday’s service was the release of the current Ward Bishop (ordained, unpaid minister over a congregation) Ian Alexander, who is moving with his family to Albuquerque. Alexander served as bishop for four years and said it had been a great privilege to work with so many wonderful people, hold the power to direct in God’s name, and witness miracles.

“We’ve been blessed to have him,” Zollinger said. “He has helped a lot of people. For that we will always be grateful.”

President Zollinger spoke of the heavy burden placed on a bishop of a ward the size of Los Alamos and the critical support from family that comes along with the calling. Bishops usually serve for a few years.

“We are a church of called people,” Zollinger said. “And we serve because we have testimonies. We all serve and work knowing someday we will be released.”

The release of Alexander and the division of the Los Alamos Ward requires calling two new bishoprics to lead and organize the new congregations. A bishopric consists of a bishop and two counselors. They are called to oversee the membership of a ward and administer the temporal affairs and spiritual and social enrichment of the group.

“It is humbling to be asked to fill such a calling,” Baker said. “I have thought about trying to fill the shoes of Bishop Alexander. He has been an excellent bishop. Luckily, President Zollinger only asked me to fill one of his shoes. Bishop Miller gets the other one.”

“I’m grateful for the opportunity to serve,” Miller said. “I have seen the long hours bishops put in, but I take great comfort knowing this calling came from the Lord.”

The bishoprics will spend the next few weeks calling members to positions needed for the wards to function. Until everything is organized, both congregations will help each other through the transition. The two new bishops referred to the boundaries as only lines on a map and said all members in Los Alamos will continue to act as a family.

The Los Alamos Ward of The Church of Jesus Christ of Latter-day Saints was first organized Oct. 17, 1957 with about 50 members. This was not the beginning of the Church in Los Alamos, however.

Church members were known to be living in Los Alamos as early as 1943. By 1950, several young families had moved to Los Alamos and a branch (a local congregation of the Church with limited programs) was organized in 1951. The Branch was originally assigned by the United States Atomic Energy Commission to meet in Aspen School. They later moved to Mountain School and then the Community Recreation Hall, now the Performing Arts Center. They later leased Dorm 187, which then occupied the grassy park area directly west of the Performing Arts Center, from the AEC as a makeshift chapel.

In 1958, the Los Alamos Ward members started construction on the chapel at 1967 18th St., which was completed in 1960. Over the ensuing years the chapel has undergone modifications and expansions but is still in daily use.

What began in 1957 with about 50 members of The Church of Jesus Christ of Latter-day Saints and a new Los Alamos ward, has grown over the ensuing 56 years to two chapels, with three congregations and about 1,000 total members living in Los Alamos and White Rock.

Map showing the new boundaries for the Los Alamos and Pajarito wards: 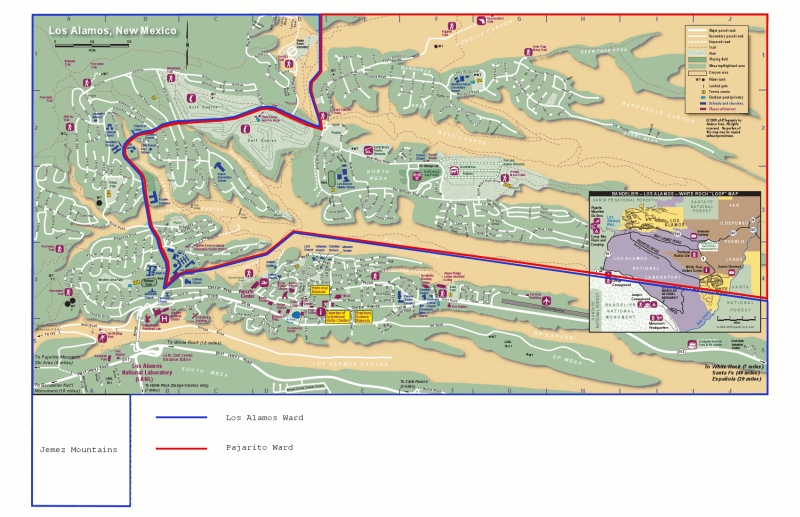