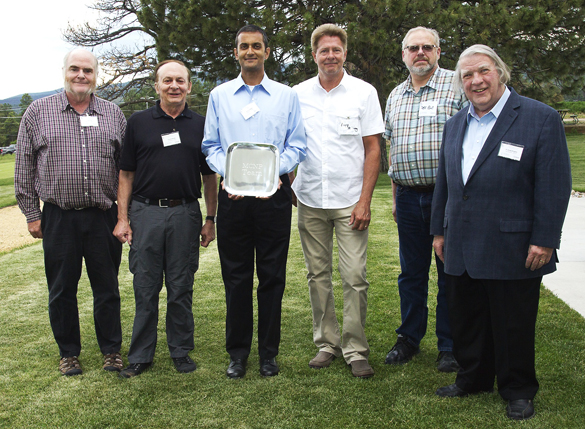 This year’s honorees for the Richard P. Feynman Innovation Prize at Los Alamos National Laboratory are the Monte Carlo Radiation Transport Team members, current and past, who have successfully brought an idea to the marketplace through a partnership, resulting in a measurable return on investment in the Laboratory’s mission performance, positive effect on the US economy, and broader public awareness of the Laboratory’s impact.

“Recognizing the innovative contributions that the Laboratory has made to the national security enterprise should give us a great sense of pride in what we have done, and hope in what we have yet to do,” Feynman Center Leader David Pesiri said. “This computer simulation tool has been transformative for the industry, and that’s just the kind of impact we expect from our national laboratories.”

As an early contributor to the science crucial to the Manhattan Project, scientist Richard P. Feynman was defined by his creative approach to problem solving, unconventional perspective, and ability to communicate science to a broad audience. The Richard P. Feynman Innovation Prize is inspired and driven by this legacy.

“MCNP is the principle simulation tool of choice when the best answers are mandatory,” said the nominating group leader, Avneet Sood. “Along with its associated nuclear data libraries, MCNP has a long, rich history and well-deserved reputation. It is used by nearly everyone at universities, laboratories, and industries for radiation particle transport as it embodies the collective best available knowledge,” he said.

The Monte Carlo method for radiation particle transport had its origins at Los Alamos dating back to the 1940s. The creators of these methods were Stanislaw Ulam, John von Neumann, Robert Richtmyer, and Nicholas Metropolis. Monte Carlo methods for particle transport have been driving computational developments since the beginning of modern computers; this continues today.

The key value MCNP provides is a predictive capability that can replace expensive or impossible-to-perform experiments.  It is often used to design large-scale measurements providing a significant time and cost savings to the community.

Approximately 8,000 copies of MCNP6 have been distributed to users in US government institutions, academia, and private industries worldwide.