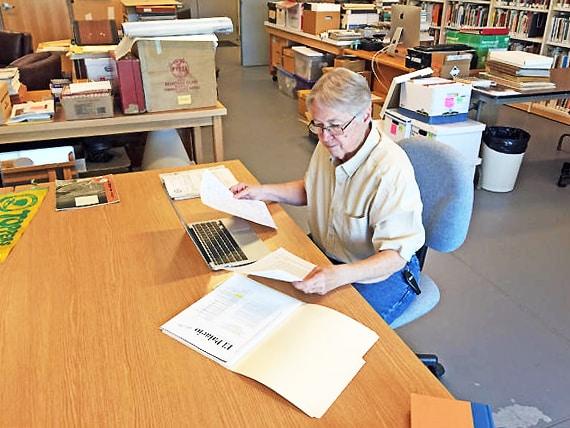 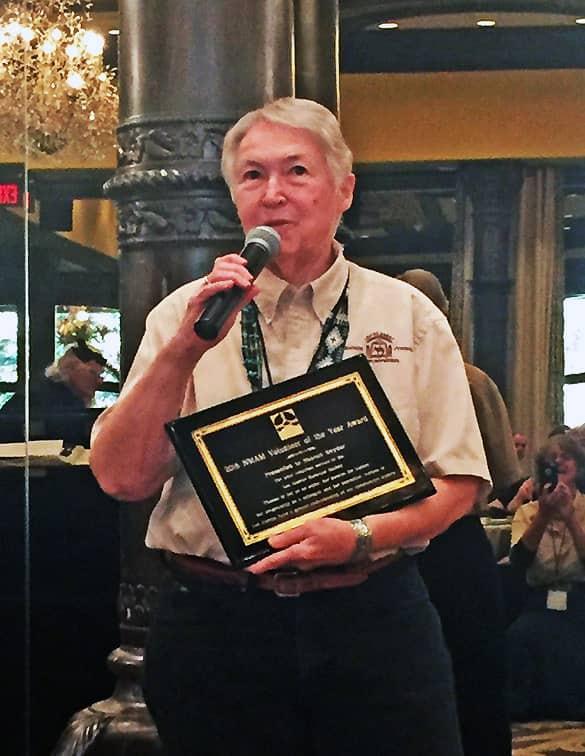 Sharon Snyder receiving her award as Volunteer of the Year during the New Mexico Association of Museum’s conference in Taos. Courtesy photo
By KIRSTEN LASKEY
Los Alamos Daily Post
kirsten@ladailypost.com

For approximately 17 years, Los Alamos native Sharon Snyder has volunteered at the Los Alamos Historical Society. She serves as a board member and heads the society’s publications. As a result of her work, the historical society nominated Snyder, and she was named Volunteer of the Year by the New Mexico Association of Museums.

Snyder received her award Friday in Taos during the Association’s four-day conference. During a recent interview with the Los Alamos Daily Post, Snyder said, “I was shocked actually” when she learned she had been nominated and won the award.

“It was a very nice surprise,” she added.

“Sharon is the longest serving board member for the Los Alamos Historical Society,” McClenahan said. “She essentially serves as a full-time volunteer of the organization. She is the editor of the Bathtub Row Press and she actually works so much that we gave her an office. She edits everything … we absolutely rely on her. We are absolutely pleased she won this award because she puts in so much time and effort.”

McClenahan said this is the first time a historical society volunteer has received the award. The organization has 45 volunteers, which includes the board.

Snyder’s commitment to the historical society has been strong since the beginning. When she first began volunteering at the organization, Snyder lived in Rio Rancho and commuted back and forth until 2014 when she moved to Los Alamos.

She explained that she grew up in Los Alamos and graduated in 1965 from Los Alamos High School.

“So it was moving home,” Snyder said.

Even before volunteering at the historical society, Snyder was interested in the local history. She was working on a biography of Peggy Pond Church when the organization’s staff approached her and asked if she would like to be involved.

One of the biggest projects Snyder said she has been a part of was publishing former Laboratory Director Sig Hecker’s two-volume Doomed to Cooperate.

“With that book we gained international recognition, quite an accomplishment for an operation that began four decades ago as a publishing committee,” Snyder said.

This is work Snyder said she enjoys doing.

“I’ve always been interested in the history here,” she said. “It is so broad.”

The local history ranges from Ancestral Pueblo people to the Ranch School through the Cold War Era.

Snyder has a background in writing and publishing. She studied journalism at the University of New Mexico, and was a teacher in Albuquerque. Additionally, Snyder helped work on yearbooks and student newspapers.

“I think I’ve always been interested in journalism and writing, and this was a good outlet for that,” she said, adding that she enjoys her colleagues as well.

“It’s the people we have had with us along the way … I just love being a part of that,” Snyder said.

The historical society also taught her a lot about the Manhattan Project, a subject she said she was not taught about in school. Being a volunteer, Snyder said, broadened her understanding of this particular piece of history.

Like Los Alamos, the historical society has a long history; it recently celebrated 50 years. Snyder said she thinks the organization “has grown in a very positive direction” during this time.

A lot of the work culminated in the renovation of the Los Alamos History Museum and all new exhibits. Snyder said the historical society worked with a professional planner and created a world class museum.

According to its website, the New Mexico Association of Museums promotes cooperation and communication among all museums, museum workers and related organizations. The association strives to improve professional standards within the museum field through activities, events, educational programs and fellowships, and acts as an advocate for New Mexico museums from local to international levels.