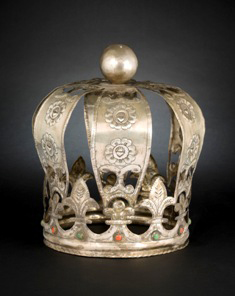 This piece and other work by Santa Fe-based tinwork artist Fred Lopez is featured in the new exhibition ‘Tinwork Tradition in New Mexico’ through April at the Los Alamos History Museum. Courtesy/LAHS

The panel is part of the Historical Society’s lecture series with this year’s theme of “Made in New Mexico.” Tuesday’s New Mexico Arts Panel will celebrate four artists and the role their crafts have played in New Mexico history.

Wood carver Gloria Lopez Cordova will be unable to be a panelist as planned and as listed on Historical Society website.

A reception is planned beforehand at 6 p.m., and the artists will be selling their art before and after the panel. In conjunction with the evening’s panel, there will be an exhibit opening at 5 p.m. in the Los Alamos History Museum, where Fred Lopez’s tin works will be on display during the months of March and April.

Andrew Ortega is a seventh generation weaver from the Ortega family of Chimayo. Some of Ortega’s weavings are in the permanent collections of the Smithsonian and the Albuquerque International Sunport and have been exhibited at the Albuquerque Museum, Museum of International Folk Art and the Southwest Arts and Crafts Show. Ortega specializes in large 54” x 84” Chimayo rugs woven on the same type of traditional two-harness loom on which his ancestors would still be able to weave.

Fred Lopez has had his Tin Work Studio in downtown Santa Fe for 15 years. His tin work is used for the New Mexico logo, perhaps the most used piece of art in the history of New Mexico. His tin work is in the permanent collection of the Museum of International Folk Art in Santa Fe and many private collections around the world. Lopez’s art also is featured in the changing exhibit space at the Los Alamos History Museum during the months of March and April, 2015.

Debbie Carrillo is a Sante Fe potter, working with micaceous clay, which contains significant mica. She began showing in the Spanish Market in Santa Fe after her husband, Charlie Carrillo, secretly entered her pieces. Carrillo also teaches her craft throughout New Mexico. In 2014, she was awarded the Spanish Market’s Master’s Award for Lifetime Achievement.

Charlie Carrillo is a professor, researcher, author and artist, specializing in santos, which are painted wood carvings of saints. Sharing a Santa Fe studio with his wife Debbie, Charlie has pieces in churches and museums from New Mexico to the Smithsonian. His books include “Saints of the Pueblos” and “A Tapestry of Kinship,” and he illustrated Peggy Pond Church’s rediscovered children’s book, “Shoes for the Santo Nino.” The award winning artist also has a book written about him, “Charlie Carrillo: Tradition and Soul.”