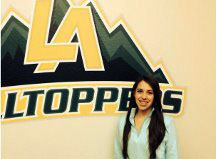 WASHINGTON, D.C. — Senators Tom Udall and Martin Heinrich have announced the names of the two students who have been selected as delegates to the 53rd annual United States Senate Youth Program (USSYP) set for March 7-14 in Washington, D.C.

Deanna Gutierrez of Los Alamos and Jonathan Salazar of Albuquerque were chosen from across the state to be part of the group of 104 student delegates who will attend the program’s 53rd annual Washington Week.

Gutierrez attends Los Alamos High School where she serves as Junior Class president. She is an ex-officio board member of the New Mexico Association of Student Councils and is a member of the Superintendent’s Student Advisory Board, National Honor Society, and Link Crew. Gutierrez is an outstanding student, maintaining a 4.6 GPA. In her free time, she also is a senior company member at New Mexico Dance Theater and holds a part-time job at Los Alamos National Bank. She aspires to pursue a degree in political science and government, followed by law school.

Salazar currently attends Atrisco Heritage Academy High School and serves as the president of the Student Body and the National Honor Society. He is ranked first in his class of 427 students, and serves on many of his district’s councils and boards. He is a leader and volunteer for his community. Salazar plans to attend Harvard University and Harvard Law School, become the governor of New Mexico and later, strive to become the first Hispanic United States president from the state of New Mexico.

The USSYP was created by Senate Resolution 324 in 1962 and has been sponsored by the Senate and fully funded by The Hearst Foundations since inception.

Originally proposed by Senators Kuchel, Mansfield, Dirksen and Humphrey, the impetus for the program as stated in Senate testimony is “to increase young Americans’ understanding of the interrelationships of the three branches of government, learn the caliber and responsibilities of federally elected and appointed officials, and emphasize the vital importance of democratic decision making not only for America but for people around the world.”

Each year this extremely competitive merit-based program brings 104 of the most outstanding high school students — two from each state, the District of Columbia and the Department of Defense Education Activity — to Washington, D.C. for an intensive week-long study of the federal government and the people who lead it. The overall mission of the program is to help instill within each class of USSYP student delegates more profound knowledge of the American political process and a lifelong commitment to public service.

In addition to the program week, The Hearst Foundations provide each student with a $5,000 undergraduate college scholarship with encouragement to continue coursework in government, history and public affairs. Transportation and all expenses for Washington Week are also provided by The Hearst Foundations; as stipulated in S.Res.324; no government funds are utilized.

The chief educational officer in each state selects the delegates after nomination by teachers and principals. This year’s delegates were designated by Secretary of Education designee Hanna Skandera. While in Washington the student delegates attend meetings and briefings with senators, House representatives and Congressional staff, the president, a justice of the Supreme Court, leaders of cabinet agencies, an ambassador to the United States and senior members of the national media. The students also will tour many of the national monuments and several museums and they will stay at the historic Mayflower Hotel in downtown Washington, D.C.

In addition to outstanding leadership abilities and a strong commitment to volunteer work, the student delegates generally rank academically in the top one percent of their states among high school juniors and seniors. Now more than 5,000 strong, alumni of the program continue to excel and develop impressive qualities that are often directed toward public service.