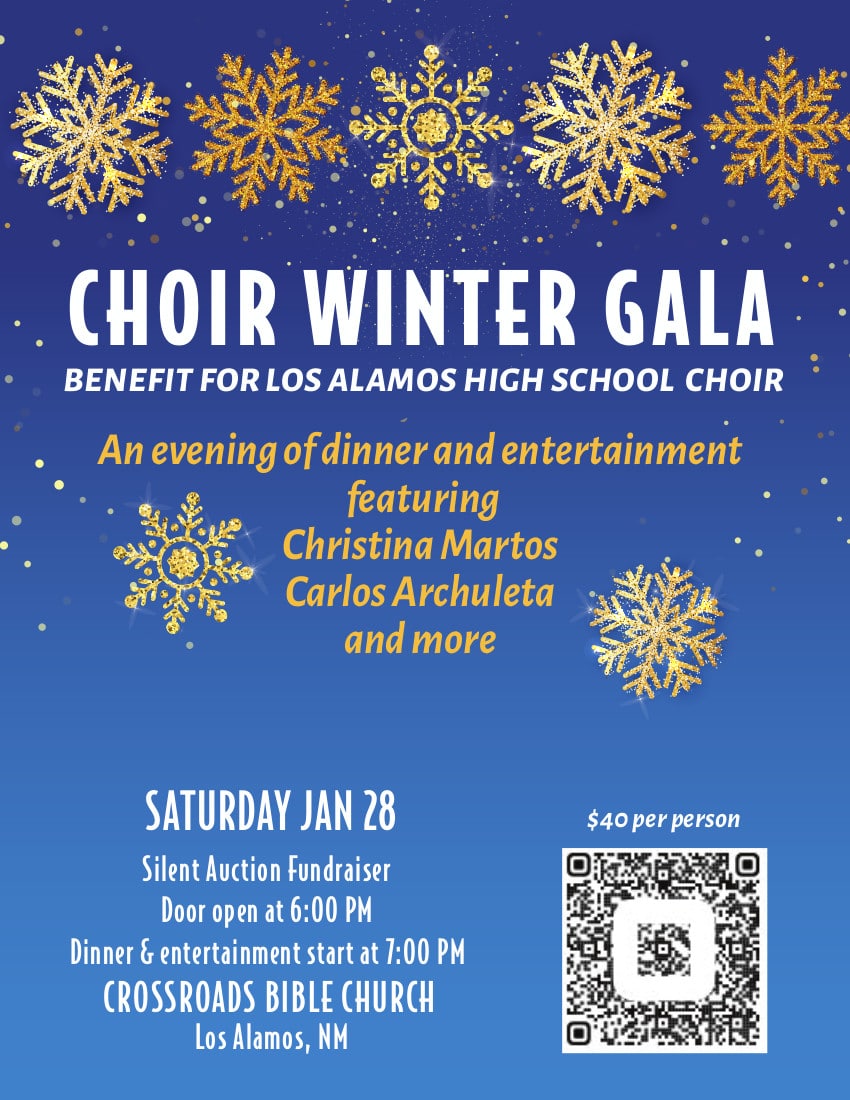 Doors open at 6 p.m., with dinner served at 7 p.m. along with entertainment and a Silent Auction.

Tickets are $40 per person and may be purchased in advance by using the QR code on the Los Alamos Choirs’ Facebook page.

Martos and Archuleta are accomplished opera singers who enjoy varied and full singing careers. The Los Alamos High School Choirs are indeed fortunate to have such a talented couple and parents of a High School choir student here in Los Alamos to perform at their benefit Gala.

A baritone and native New Mexican, Carlos Archuleta’s appearances include The Santa Fe Opera, The New York City Opera, Cincinnati Opera and the Boston Lyric Opera. One of his signature roles was Escamillo in Carmen which took him to London’s Royal Albert Hall.

Christina Martos’ (soprano) recent engagements include the Montage Music Society and other nearby venues, but just as impressively, Martos has appeared with the Washington National Opera, The Pittsburgh Symphony Orchestra and at Carnegie Hall in New York, to name a few.

Martos will be joining her daughter and 30 other LAHS Choir students on the very same stage at Carnegie Hall April 3, 2023. The Los Alamos choir performers will be singing a challenging classical piece, Jubilate Deo by Dan Forrest under the direction of nationally renowned guest conductor Pearl Shangkuan. This Masterwork Series is presented by The Manhattan Concert Productions.

LAHS Choirs Director Jason Rutledge, who will be traveling with the group to New York City, said he is excited for the experience the students will have – not only in rehearsals and performance of this classical choral piece, but for the invaluable opportunity to sing on a famous Carnegie Hall stage with their peers.

“They are working hard to prepare and each of them is also eagerly anticipating the Broadway shows and exploring New York, which will undoubtedly open their eyes to this unique cultural and urban environment”, Rutledge said.

Other performers at the Choir Winter Gala include a variety of special guests such as The Atomic Follies Cabaret, a Los Alamos cabaret troop who perform a blend of singing, dancing and skits based out of the Los Alamos Little Theater. Additional performances feature student soloists from the LAHS Choir and Olions Thespian Group, the high school’s own Jazz Band and Rutledge who will perform a solo and a duet with Martos.

An important aspect of the evening Gala will be the silent auction. The Choir Winter Gala was created as a benefit for the New York City travelers from the Los Alamos High School Choir. The proceeds will go directly to help defray their trip expenses and enable them to have this unique opportunity.

Please come and enjoy these quality performances and help support the LAHS Choir.

More About the Performers

Baritone Carlos Archuleta, a native New Mexican, has had a varied and full singing career appearing with companies which include the Santa Fe Opera, Washington National Opera, New York City Opera, Cincinnati Opera, Dallas Opera, Minnesota Opera, Orlando Opera, Boston Lyric Opera and Utah Opera. One of his signature roles was Escamillo in Carmen which took him to London, performing in the Royal Albert Hall. Recent engagements include appearances with the New Mexico Performing Arts Society, Montage Music Society, and with Opera Southwest as Tenorio in the world premiere of Bless Me Ultima.