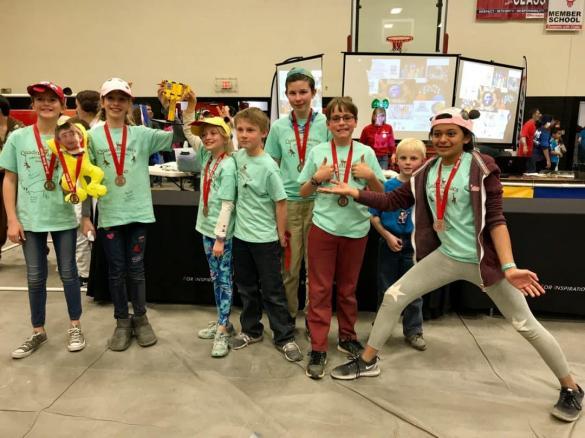 The Quadrumaniacs who won the 2nd Place Champions Award Feb. 10 and will compete at the North American FLL Open Championship in Legoland in May are, from left, Lucy Kelley, Sasha Simakov, Maggie Kelley, Corben Meek, Angie O’Leary, Timothy Rousculp and Zoya Khan.  Not pictured is Magellan Bronson. Brother Alex Meek, peeking in, is on an FLL Junior team.  The Quadrumaniacs are coached by Susannah Rousculp and Elizabeth Meek with Karen Kelley as co-coach and mentor. Courtesy photo 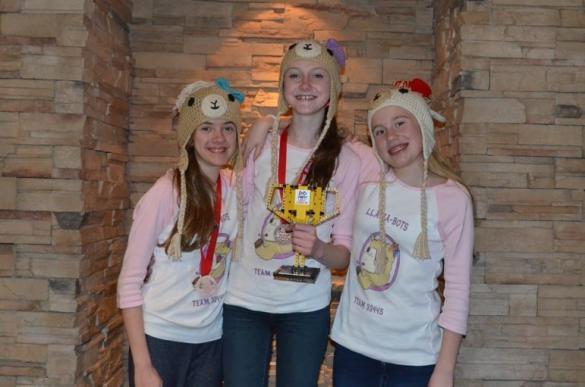 The Llamabots team earned the Teamwork Core Values Award, and the Quadrumanaics won the Second Place Champions Award, securing a spot to compete in an international post-season tournament.  The Quadrumaniacs will participate in the North American Open FLL Tournament in LEGOLAND, Carlsbad, Calif. May 18-20.  The Quadrumaniacs’ project is also under consideration for New Mexico’s submission for the Global Innovation Award.

The season began in August, when the FLL “challenge” was released. Each year’s challenge has a theme.This year it was “Hydrodynamics,” and teams were tasked with researching the human water cycle and choosing a problem to work on. The “Project” is one of the three main parts of FLL, and contrary to popular belief – the project part doesn’t involve LEGOs.  The FIRST program promotes learning STEM (science, technology, engineering and math) in a fun, engaging way. To prepare for the robot games, teams use LEGO Mindstorms to build an autonomous robot that runs on a table of LEGO elements to perform “missions” for points (the missions involved water cycle elements, to tie into the theme).

Teams problem-solve using programming and building techniques, with help from coaches & mentors. The program also encourages strong Core Values, and competitions include a judging round in which teams show off their teamwork, inclusiveness and ability to overcome difficult challenges.  FLL teams from Los Alamos have been competing for eight years and scores of local kids have gotten to experience the fun of programming LEGO robots and presenting innovative projects to the community and to judges in their competitions.

Because more than100 teams in New Mexico and Southern Colorado are a part of the NMFLL, teams must enter qualifying tournaments to earn a spot at the state championship. A Los Alamos Qualifier (LAFLL), hosted by Project Y, the high school FIRST Robotics Competition (FRC) team was held on Dec. 10 at Los Alamos Middle School. FRC Team 4153 Project Y team members and mentors donated hours of time and effort to host the tournament. Several teams from Los Alamos competed with teams that traveled from Albuquerque.

At the December qualifying tournament, the Llamabots and Quadrumaniacs earned spots to compete at the state championship along with an Albuquerque team “Pandamonium” that won the qualifier’s Champion’s Award. The Sabretooth Cyborgs won the Core Values award at the LAFLL Tournament. The Quadrumaniacs were awarded the Project Award and also LAFLL Global Innovation Award for their project work on investigating reclaiming energy in wastewater that flows in pipes from high on the mesas down to the canyon below. Their project submission will compete with six others from across New Mexico for a chance to enter the international Global Innovation Award contest.

Although the Llamabots season has come to an end, they plan to compete again next year. The Quadrumaniacs will be working on programming their LEGO Mindstorms robot and continuing their project, as they work with local mentors from PEEC (Siobhan Niklasson), DPU (Clay Moseley) and LANL (Mark Bibeault). The Quadrumaniacs will be competing in Carlsbad, Calif. at the North American FLL Open Tournament in Legoland.  Look for the team over the next few months working on fundraising.  Tax-deductible donations and sponsorships for the FLL Team 146 Quadrumaniacs can be made through the Girl Scouts of New Mexico Trails, which is the sponsoring partner for NMFLL. Contact the Quadrumaniacs directly by email: quadrumaniacs@gmail.com.