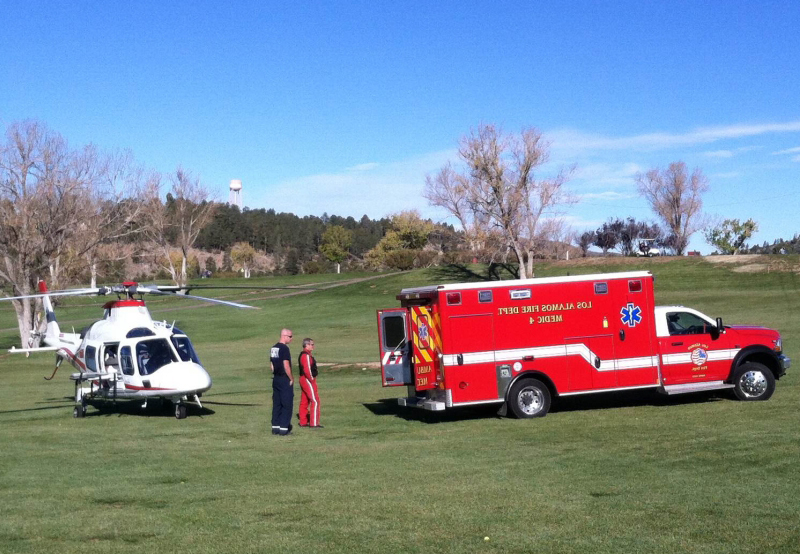 Sunday’s incident involved a 62-year-old man who had been riding a motorcycle north of Guaje Pines Cemetery.

“A hiker called 9-1-1 at 2:15 p.m. after coming upon the man laying unconcious on the ground,” Acting Fire Chief Glenn Treyhern told the Los Alamos Daily Post this morning. “Not knowing what they might encounter in that area, our team responded on ATVs and located the man about two miles in. They were able to back board him and transport him by ATV.”

LAFD loaded the man into an awaiting ambulance and delivered him to a helicopter that had landed on the driving range at the Los Alamos Golf Course. The helicopter air lifted the man to St. Vincent’s in Santa Fe.

“This was the first time the golf course has been used as an extraction point in all the years that I’ve been here … we were glad to help,” golf pro Donnie Torres said.

The man’s condition is not yet known, Treyhern said.

“I want to commend the members of the B Shift TRT for doing such excellent work yesterday, when they responded to the barn fire and their rescue of the teen from White Rock Canyon earlier this month,” Trehern said. “I also want to thank the Los Alamos Police Department for their important assistance at these events … it’s something we really appreciate.”

Trehern said reports indicate that the 15-year-old girl who fell 100 feet into White Rock Canyon, Sunday Oct. 13, is going to be fine. 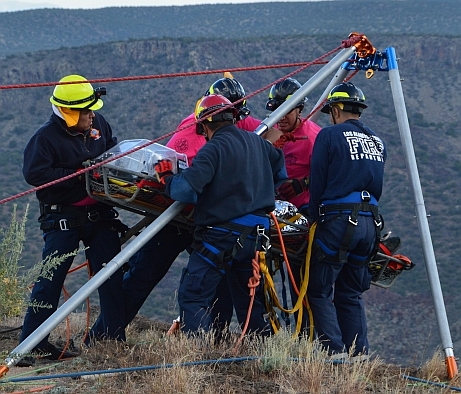 During her rescue, TRT members spent more than two hours battling falling rocks and gusting winds in the high angle operation. They had responded to a 9-1-1 call at 3:20 p.m. from friends hiking with her in the Hells Hole portion of White Rock Canyon. One of the two friends remained in a location 25 feet above her and was later walked out uninjured.

Using a series of ropes and pulleys, TRT members were lowered down to the injured girl, treated and placed her in a gurney hoisted by ropes, a few feet at a time, up to the top of the canyon where firefighters lifted her to safety. She was placed in an ambulance and driven to an awaiting CareFlight helicopter at Overlook Park. The girl’s mother rode in the helicopter with her to Albuquerque. 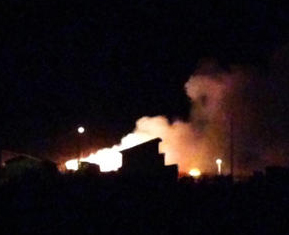 TRT members responded to a large barn fire near midnight Oct. 8 at the North Mesa Stables. Four of five horses at the barn were saved and B Shift TRT members were able to keep the blaze from spreading to other barns.

TRT members maintain specialized training and are prepared to respond to emergencies throughout Los Alamos and in the surrounding canyons.