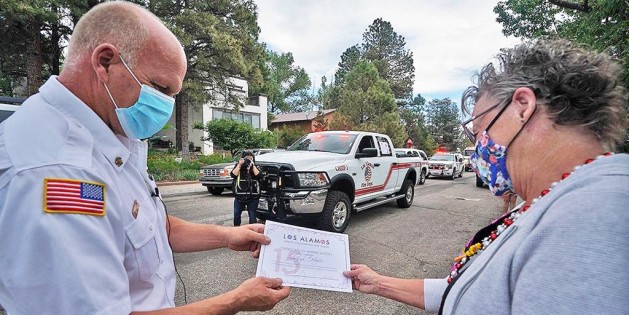 Fire Chief Troy Hughes presents a retirement certificate to Security and Safeguards/Labor Relations Manager Sharyl Hofer during a procession past her home Wednesday honoring her. Photo by John McHale/ladailypost.com 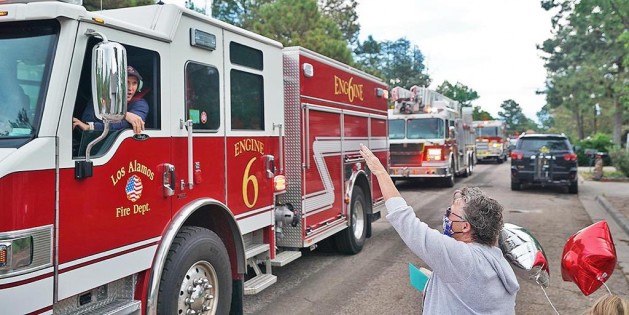 Sharyl Hofer waves at friends Wednesday as they bid her farewell. Photo by John McHale/ladailypost.com

Due to the COVID-19 pandemic and state order prohibiting large gatherings, rather than a retirement party, the fire department honored Hofer with a procession of fire personnel arriving at her home where Fire Chief Troy Hughes presented her with a special retirement certificate and plaque.

“We were lucky to have Sharyl as our lead negotiator,” Chief Hughes said. “She was very dedicated to find the right answers and wasn’t afraid to speak up on issues she felt important and we appreciated that. She did a great job negotiating our last three labor contracts. She is going to be missed at LAFD.”

Hughes said that during the last six weeks Hofer has been transitioning her replacement, former County Training Manager Howard Hall.

Hofer joined Los Alamos County April 5, 2005 as Human Resource manager. She recalled flying in from Guam to New Mexico in January of that year just before a typhoon hit the island.

“What a change going from the beach, palm trees and ocean to the desert area of Albuquerque and then the beautiful mountains and area of Los Alamos County,” she said.

Highlights for Hofer in her role as HR manager include the initiation of the County’s Employee Recognition Program. She said she is proud of the values that were established through the Charter Committee and the employee functions created back then such as the Spring Fling, which continues to this day.

In February of 2010, Hofer requested a transfer to the fire department, which included transferring the labor relations responsibilities from HR to LAFD.

“The major highlight of my tenure with LAFD has been working with the various personnel and being a part of the greatest public service that there is,” Hofer told the Los Alamos Daily Post. “I have had the opportunity to work with so many great folks – and will miss that deeply.”

“It has been a pleasure working with them both,” she said. “They have tolerated, and even understood my passionate expressions on various topics. The other chiefs also have been terrific and always have had time for me when I wanted to discuss something with them.”

“I worked with both Chief McDonald and Chief Tucker during my tenure as Human Resource manager at Los Alamos County and directly with Chief Tucker when I transferred to the fire department and words cannot describe what I learned from each of them,” she said.

Hofer describes the administrative staff at LAFD as “top-notch”, adding, “Seeing them daily and now going into this current mode of working from home, has been extremely hard. And the crews, I cannot say enough about their dedication and love for the fire service. I have been around for the hiring of probably 75 percent of them and have had the privilege to watch them grow and progress through the ranks.”

She also spoke of retired LAFD personnel who stand out fondly in her memories including Justin Grider, Richard Garcia, Patrick Tapia, and Robbie Stibbard. Each of them for a different reason and different skill made an impression on her, Hofer said.

“Most of all, for LAFD, I could not have succeeded at this job without the support and friendship of Norma Valdez and Vivian Medina … they were … and are my rocks,” she said.

In speaking of other highlights that stand out in her mind during her years at LAFD, Hofer mentioned the successful negotiations achieved by using the interest-based bargaining (IBB) process in 2011/2012 after imposing a union contract in 2010.

“We have continued with the IBB process in both negotiations and day to day interactions with the union. I am immensely proud of the labor management relationship that exists at LAFD … we don’t always agree, however, labor and management continue to talk about issues reasonably,” she said.

Another highlight Hofer recalled warmly is the annual St. Balderick’s fundraiser that supports the most promising research to find cures for childhood cancers.

During her 15 years working at Los Alamos County, Hofer said she has seen County Council members come and go.

“When I first arrived at the County, the Council had developed its first strategic plan – and I was very surprised that it did not have a goal that addressed the employees,” she said. “I was so pleased when this current Council finally included the employees. This is the first Council that I have seen that has expressed often and genuinely their appreciation for the employees. In meeting with the Council on compensation and negotiations, it is evident that they appreciate the employees … and that means so much to all of us.”

Los Alamos County as a whole is comprised of a terrific group of employees, Hofer said, adding that the majority care tremendously about their jobs and the community. “I will miss them all!”

Hofer and her husband Jerry have been married nearly 32 years. He drives a bus for the Los Alamos Public Schools. The couple own a home in Los Alamos and intend to stay here.

“Our son and daughter-in-law and our granddaughters live here and it’s a wonderful community,” she said. “We have an RV and do plan to take some trips. In fact, I love whales and we already have reservations to watch the whales for three weeks next April on the Oregon coast.” 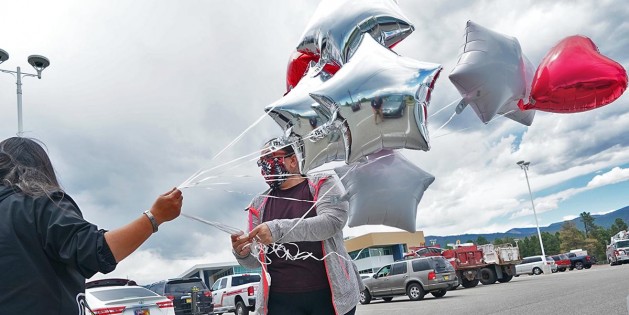 LAFD Louisa Martinez, left, and Ana Martinez untangle balloons to be used in decorating vehicles gathered in the Los Alamos Middle School parking lot Wednesday to prepare for a special procession past the home of Sharyl Hofer on her retirement day. Photo by John McHale/ladailypost.com 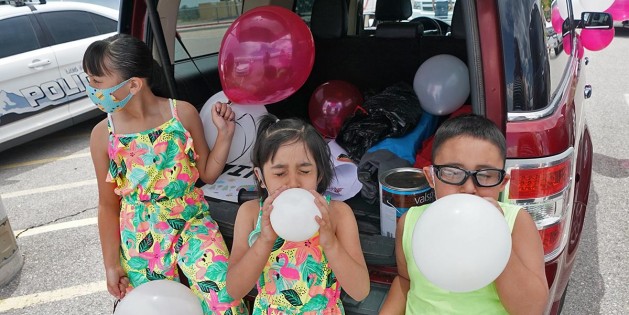 From left, Isabella Valdez, Sophia Hernandez and Robert Hernandez get the job of blowing up balloons for the procession. Photo by John McHale/ladailypost.com 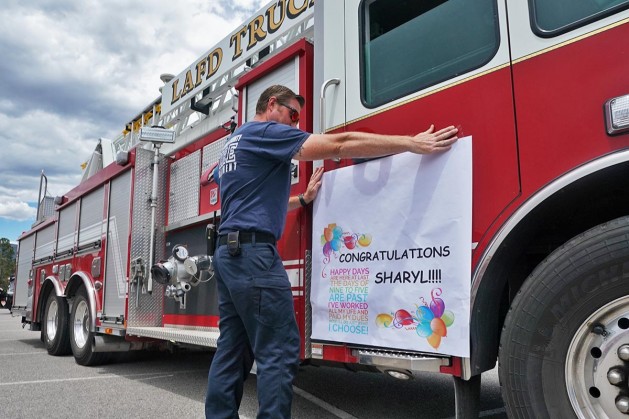 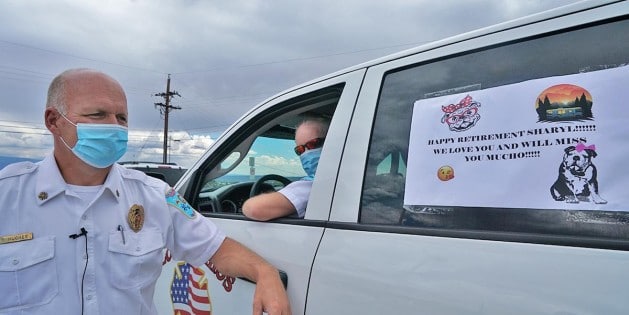 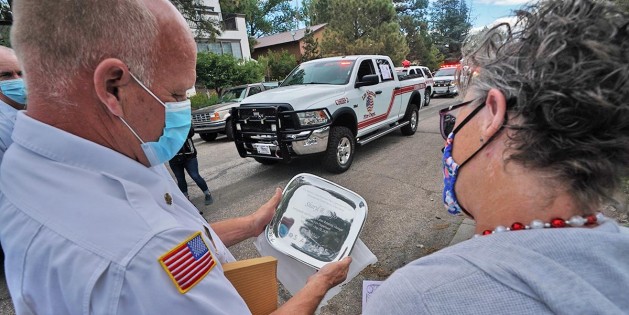 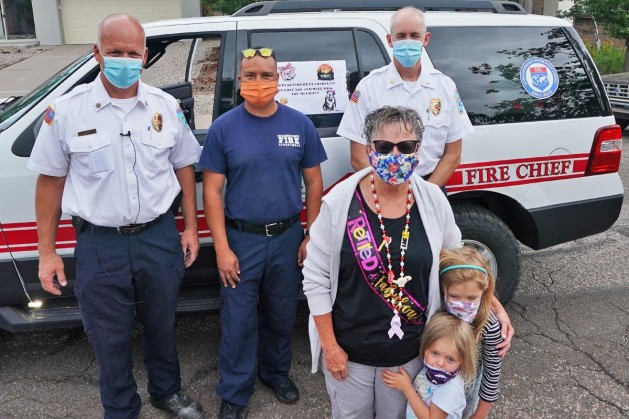 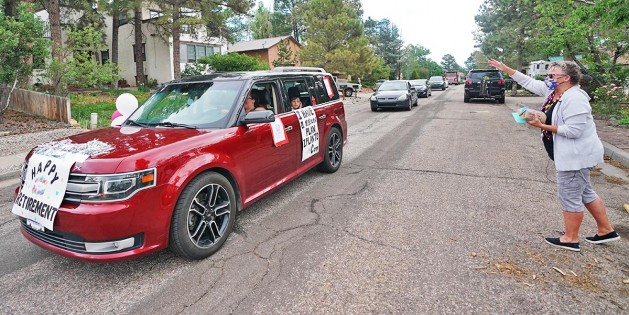 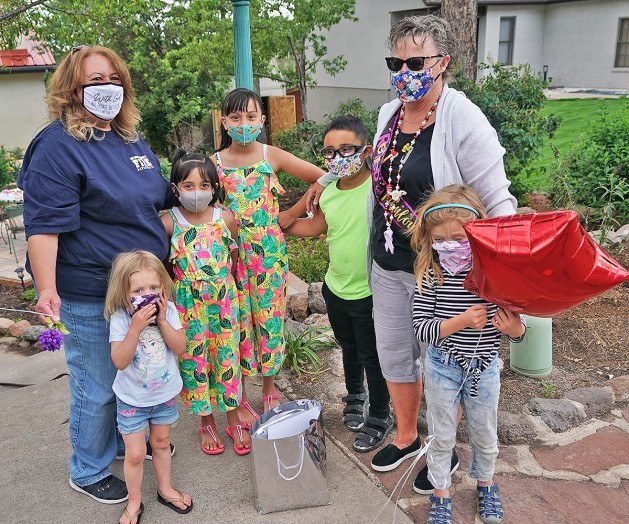 Group photo with retiree Sharyl Hofer and her friends and family. Photo by John McHale/ladailypost.com