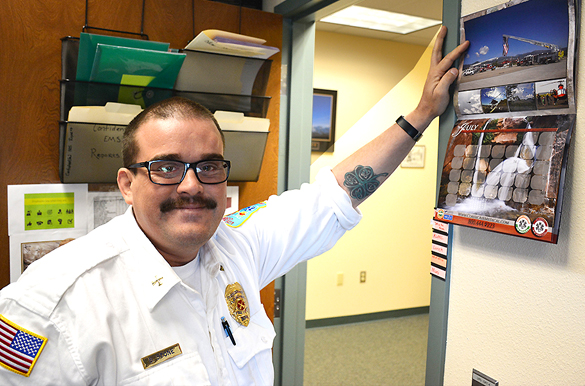 LAFD EMS Chief Ben Stone travels to Cambridge in June to participate in the Senior Executives in State and Local Government program at Harvard University. The caledar on the wall, put out by Air Medical, features Stone on one of the pages. Courtesy photo

For the past decade, Los Alamos Division Fire Chief-EMS Ben Stone has educated UNM students in the EMS program all the while he was finishing his own formal education and climbing a career ladder. This month, the youngest chief in the LAFD is reaching the top—he’s picking up a diploma on his way to the Ivy League. 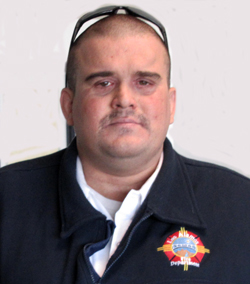 Stone is traveling to Cambridge in June to participate in the prestigious Senior Executives in State and Local Government program at Harvard University’s John F. Kennedy School of Government. Stone was selected out of a highly competitive candidate pool of qualified EMS chiefs by the International Association of Emergency Medical Services Chiefs (IAEMSC) as the 2016 IAEMSC/Intermedix Harvard Fellowship recipient. This award covers all expenses, including the $12,400 tuition, travel, room and board.

“UNM-Los Alamos has been privileged to have Ben as a dynamic and talented faculty member in our EMS program,” said Kay Willerton, interim-dean of Instruction and Mathematics & Engineering chair at UNM-LA. “Interestingly, he is also a student with UNM-LA as he works to complete his bachelor’s and master’s degrees.”

“Being a role model for so many young minds in the UNM-LA EMS program inspired me to continue my own education,” Stone said.

It was Stone’s passion for Emergency Medical Services and leadership that inspired him to teach. He has been involved with UNM for over 10 years, instructing at the EMS Academy on main campus and for the EMS program at UNM-LA.

With a busy teaching and LAFD career, Stone still found time to prioritize his own formal education. He is graduating this May from UNM-LA with a bachelor’s degree in Emergency Medical Services. Stone ultimately plans to obtain a doctoral degree.

“Being a role model for so many young minds in the UNM-LA EMS program inspired me to continue my own education,” Stone said. “The UNM programs that I have completed helped open my eyes to the vast possibilities of information—I have integrated many of these into Los Alamos FD and our everyday operations.”

As a Harvard Fellow, Stone will have a chance to indulge his quest for gaining knowledge and sharing what he learns with others. The three-week “think tank” program includes 12-15 participants in positions of leadership, from fire and EMS professionals to government officials and federal agency leaders. Key topics covered during the program include: leadership, negotiations, public/private partnerships, cooperative governance and behavioral decision making.

IAEMSC is a professional organization of EMS chiefs committed to improving emergency medical care and communications. Stone explained that the LAFD has a fire officer training program with five levels that include leadership preparation, but the Emergency Medical Services side does not have any specific leadership training.

When applying for the Harvard Fellowship Stone had to write five essays. In the final essay, he addressed his thoughts on leadership in the field of EMS and discussed his plans to develop leadership training.

“Emergency Medical Services is a relatively new profession, when compared to clergy or physicians. Due to this we have had to rapidly develop, in order to meet the needs of our clients,” Stone said. “This has included rapidly changing medical standards and integration of research based treatments. As the profession grows, we—EMS Chiefs—have identified the need for advanced leadership training to prepare future EMS chiefs for the challenges of the future.” 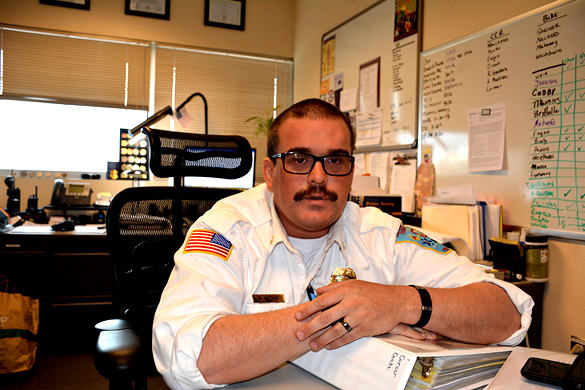 Stone began his career as a fireman at the Warner’s Hose Company in a small town outside of Syracuse in upstate New York. By 2003 he was ready for a life change and accepted a position with the LAFD. In 2007 he got his paramedic credential and he moved to Albuquerque, continuing to commute to work in Los Alamos. He also worked part-time for the Albuquerque Metro Detention Center providing medical care.

While living in Albuquerque, Stone met and married his wife Deborah and started a family. Once their two daughters neared school age they moved back to Los Alamos.

During the Las Conchas Fire in 2011, Stone was serving as a captain. He quickly moved up the ranks and was promoted to chief in 2013.

Stone is proud to be part of the UNM-Los Alamos Fire Science and EMS program. He says it has the most highly trained trainers of all the programs in the state. That designation is due to Los Alamos National Laboratory specifications, which are more stringent than the basic state specifications.

At times Stone misses the hands-on aspect of working in the field, but he feels that as a chief he can accomplish many things that make his leadership position worthwhile. Now as a Harvard Fellow, he no doubt will have more tools to do so.