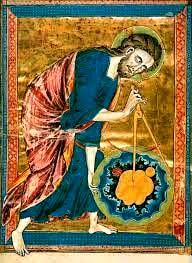 An image of Christ measuring out the world. Courtesy/LAFSF

This doctrine of Creation respects scientific investigation as being not at all in conflict with Biblical Creation. Arising from the Incarnation, Eastern Christianity also promulgates the doctrine of theosis or divinization of human nature as believers seek union with God through progressive spiritualization of human senses and intellect.

This presentation will discuss major works of St. Basil the Great (330-379 CE) and St. Maximus the Confessor (c. 580-662 CE) as they illustrate aspects of these two theologies.

But Eastern Christianity does offer us a model for how faith and science, the use of sense perceptible knowledge and discursive reasoning, can relate to one another, a model much different from the “conflict model” so prevalent in Western Christianity.

Dr. Erhart completed her undergraduate studies at St. John’s College in Santa Fe, the “great Books” school. She began graduate school in Hebrew and Jewish Studies at Hebrew University in Jerusalem, before moving to Toronto to continue theological studies at St. Michael’s College, University of Toronto. Dr. Erhart completed theological studies with a concentration in Early Christian Studies at The Catholic University of America in Washington, D.C. She has taught World Religions at a variety of colleges and universities. She currently teaches business technology courses at UNM-LA. Her research interests include Syriac Christianity, pre-modern military history, sustainable and environmental issues and the intersection between science and religion.