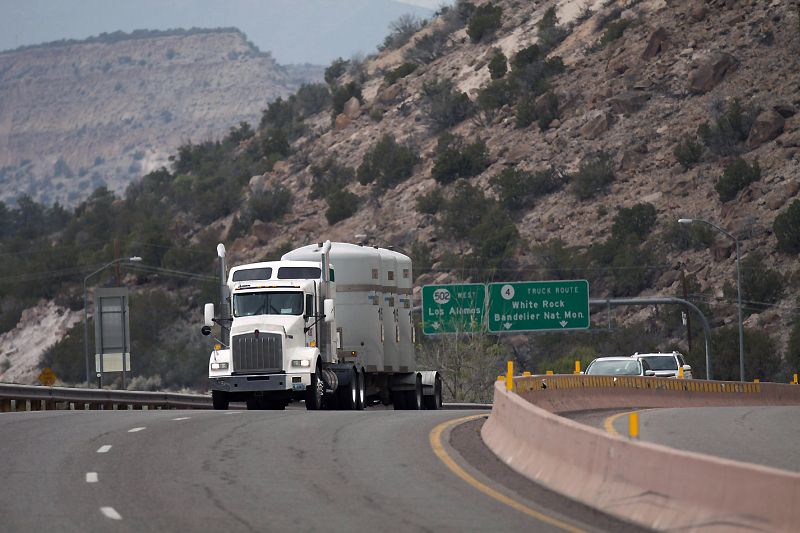 “Los Alamos continues to exceed expectations dispositioning waste from Area G,” said Pete Maggiore, assistant manager for Environmental Operations at the Department of Energy’s Los Alamos Field Office. “The success of this campaign has been made possible through the efforts of many people, including our partners at the New Mexico Environment Department.”

The effort is part of an agreement between the New Mexico Environment Department and the Department of Energy’s National Nuclear Security Administration and Office of Environmental Management to remove 3,706 cubic meters of TRU waste stored aboveground at Area G, the Laboratory’s waste storage facility, by June 30, 2014. The accelerated removal campaign is in its second year, with a goal to remove 2,600 cubic meters of waste by September 30, 2013. Since the campaign began, Los Alamos has removed 1,994 cubic meters of waste.

“We’ve made significant progress removing waste stored above ground at Area G, and we made this progress while maintaining an excellent safety record,” said Jeff Mousseau, associate director of Environmental Programs at the Laboratory. “We are confident this trend will continue throughout the rest of the campaign.”

TRU waste consists of clothing, tools, rags, debris, soil and other items contaminated with radioactive material, mostly plutonium. Transuranic elements such as plutonium have an atomic number greater than uranium, so they are labeled transuranic, for “beyond uranium” on the periodic table of elements.

About 90 percent of the current TRU waste inventory is a result of decades of nuclear research and weapons production at the Laboratory and is often referred to as “legacy” waste.