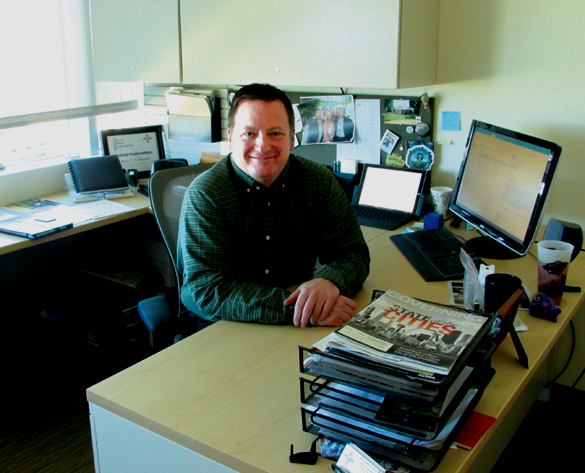 After almost seven years working as the Deputy County Manager Brian Bosshardt is moving on in his career. Bosshardt has accepted a position as city manager for Bedford, Texas. He will begin his new job in April.

“It’s a natural progression in my career; it’s the next step,” Bosshardt said.

He added he has a defined set of colleagues and friends in the Dallas area. Plus, with 98 percent of Bedford developed, it is focusing on redevelopment.

“I like the position the city is in today,” Bosshardt said.

Bedford also seems to have a cohesive council and Bosshardt said he has met with the staff. “It’s clear they have a team there.”

Still, Bosshardt said he will miss the team he works with in Los Alamos. “Harry (County Manager Harry Burgess) put together a great team and it’s been a wonderful opportunity to be a part of it.”

He added, “Harry has been a great mentor to me so I am certainly going to take some of the skill sets that Harry has given.”

These skills include communicating with the Council along with directing, shepherding and coordinating internally within the organization. The really important thing is reaching out into the community, Bosshardt said.

“You can’t be successful in this position sitting in an office,” Bosshardt said.

Among the successes Bosshardt experienced during his time as deputy manager is the work that was done internally to improve the organization such as a leadership program. Additionally, Bosshardt is proud of the County’s regional approach to doing business. He said the county government has gotten off the hill and worked with other county managers, assistant managers, as well as built relationships with elected officials and their staff.

County staff have done all of this as a unified group. “The work we do is very much a team effort,” Bosshardt said.

There are still challenges facing the county. Bosshardt said there is clearly a housing need as well as a need for affordable housing. The county also needs to address how to expand its economic base. Some of these challenges are due to the town’s population, geography and physical location.

Before coming to Los Alamos, Bosshardt worked for 10 years in Chandler, Ariz., and spent about four years in Westminster, Colo.

He credits a high school teacher for inspiring him to get involved in public service. “My ninth grade social studies teacher; she instilled a passion in politics and government,” Bosshardt said. When he attended college, Bosshardt said he discovered he wanted to work in local government.