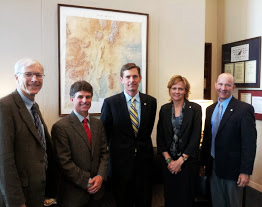 Los Alamos County officials commented today on their April 30-May 2 visit to Washington, D.C., to meet with key congressional and federal leaders.

“Visiting one on one with our congressional delegation about the issues that are important to the citizens of Los Alamos is beneficial during these annual visits,” said Rodgers, noting that Sen. Martin Heinrich and Rep. Ben Ray Lujan welcomed them to their office for private meetings.

Sen. Tom Udall was not available but Rodgers said the group did have the opportunity to meet with his senior staff. Topics ranged from continued congressional support of funding for Los Alamos National Laboratory, especially in the area of modernizing Lab facilities, environmental remediation and clean-up activities, as well as support for the new Manhattan Project Park legislation.

Burgess agreed with Rodgers that this trip was very productive, largely because additional information is now coming forward in discussions with Congress about funding proposed plans for replacement of the former CMR facilities and the need to start funding the project immediately.

“A year ago, Director (Charlie) McMillan had just rolled out the concepts of a phased or modular plan for the facility,” Burgess said, noting that bi-partisan support seems to exist in the House and Senate to support the funding for the construction of new facilities as well as re-tooling of existing facilities to permit the completion of the initial phase of the project by 2019. Both Heinrich and Lujan seemed cautiously optimistic that some form of the plan would gain traction and could possibly be approved by the House and Senate during this fall’s budget discussions.

Rodgers said one of the main areas of focus the Council emphasized during discussions about the modular approach is the desire for Congress to keep moving forward incrementally to pursue design options and solidify funding, even if project construction may be out in the future and take several years – because it’s important to Los Alamos that the upgrades take place for the safety and security of the community. The Lab has an obligation to vacate the facility by 2019, he said, and the Council doesn’t want to see any more delays.

“I think the director’s plan to use funding makes sense,” Rodgers said, “Congressional leaders can see taking “bite sized pieces” of the budget year after year to tackle the project and it meets their goals for better fiscal control as it progresses. No single Congress is going to want to be responsible for approving funds for the entire project, but we heard that moving ahead with some type of phased approach is gaining ground in House and Senate discussions, and that’s encouraging news.”

Rodgers noted that the federal delegation thought it was possible some of the funds previously appropriated for CMRR might actually be released from a current hold on their use, to allow the funds to be used in this fiscal year to start the work and move ahead with design of the new facilities.

Rodgers said he was especially impressed with the meeting held on Friday with newly appointed NNSA Administrator Frank Klotz. Los Alamos County was the first local government to meet with him in his new position, he said, and Councilors had the opportunity to hear first-hand about the status of NNSA’s new direction and the changes he plans to implement at NNSA to improve NNSA’s operations.

“He was very personable and genuinely listened to our concerns,” Rodgers said, adding that he looked forward to working with Klotz on future issues of interest to Los Alamos.

While meeting with Senate staff, the Councilors heard about the commission that is reviewing the 17 DOE labs, which was very enlightening, Rodgers said.

“We didn’t hear that Los Alamos National Laboratory is in any danger of being shut down in the future,” he said. “In fact, they acknowledged the Lab as being critical to national defense.”

Burgess added that the commission is more interested in evaluating the various missions of the laboratories, their budget and resources. Past practice was to have some of the laboratories acting in a “checks and balances” role for responsibility and accountability, or for quality control, he said. That role is changing as the mission of the labs change, Burgess said. Therefore, in areas where missions might overlap, the commission will be looking for possible combinations or efficiencies, which could move functions from one lab to another, to better align with funding options.

Rodgers emphasized that the County discussed the importance of environmental cleanup funding in every meeting.

“We have been working with the State and DOE, and it is important for the cleanup to be funded at a level that protects the environment. We support the request for $255 million and we are hopeful that it will be funded,” he said.

While the Councilors visited Washington, the House Armed Services committee unveiled its Fiscal Year 2015 National Defense Authorization Bill. Included in that bill is a provision that would make portions of Los Alamos County part of the National Park Service “Manhattan Project Historic National Park.” The County has actively lobbied for the project for several years, and both Vice-Chair Henderson and Councilor Sheehey commented that they were encouraged to see language contained in the Committee’s bill.

“The New Mexico, Tennessee and Washington Congressional delegations all support the new Manhattan Project Park legislation, and so we were glad to see it introduced in the House; however, we heard that the bill needs support in the Senate to pass,” Henderson said, adding, “It is clear that all parties support the bill, now we need to get down to the nuts and bolts of actually passing the legislation.”

Sheehey agreed, saying that he hoped the purpose behind creating the new park is well-understood.

“The Park will tell the story of how Americans came together in time of war and accomplished an unprecedented technological feat in a very short time. Like our National Parks that tell the story of the Civil War, it will not glorify war or the atomic bomb, but it will educate Americans on the whole complex story of the Manhattan Project,” Sheehey said. “We should work to open this park while some of the Manhattan Project Veterans are still alive and able to see their work recognized by our nation. These people played a valuable role in ending World War II and defending not only the United States but also democracies throughout the world.”

The Councilors also met with the DOE Environmental Management Office, members of the House Energy and Water Appropriations Committee and the Senate Armed Services Committee about various updates on current topics of interest to Los Alamos. The group expressed their desire during all of their meetings for Congress and the DOE to keep the County well-informed and involved in any future discussions about safety and security that might impact the community, especially for such items as infrastructure and shared boundaries, such as roadways or building a bypass around the Lab.