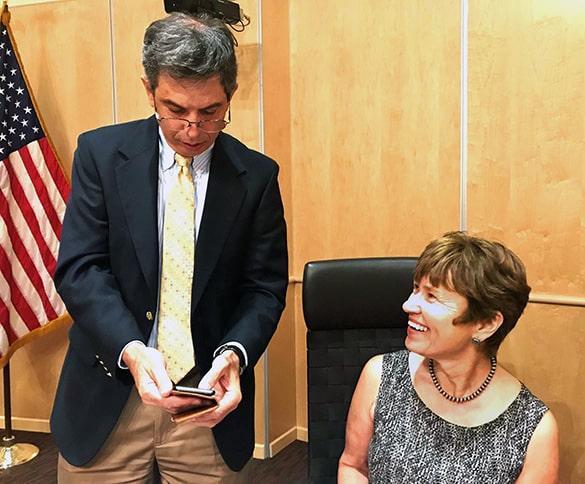 “And if we get really lucky even with the new contractor (Triad) to discuss a number of issues. But one of the most pressing ones of course is their corporate status and what they intend to do in terms of their taxability or nontaxability,” Chandler said.

The agenda item description for this evening’s special session, which is scheduled for 6 p.m. in Council Chambers in the Municipal Building at 1000 Central Ave., indicates that the County needs to consider the impact of the change of LANL operators upon its revenue and will discuss the various strategies the County may employ in response to Triad’s taxable status in anticipation of the need to revise the FY-19 budget in the coming months.

Since Monday’s announcements that new LANL leadership has been appointed and the contract transition has begun, Triad, which is comprised of three nonprofit organizations, Battelle Memorial Institute, Texas A&M University System and University of California, has declined to comment on its taxability status. Triad spokesperson Katie Delaney told the Los Alamos Daily Post in a telephone call Tuesday that the tax issue is being reviewed and that the company will provide an update as soon as possible.

NNSA also appears to be staying mum on the taxability issue with spokesperson Lindsey Geisler telling the Los Alamos Daily Post Tuesday in an email that NNSA is going to “defer to Triad on this for the moment”. The Triad website describes the corporation as “a nonprofit, public service focused organization”.

The Los Alamos Daily Post also reached out to UC officials Kimberly Budil, vice president for National Laboratories and Gary Falle of the UC Federal Government Relations Office but was notified by their spokesperson that neither would be available for interview for the next two days.

Jack Jekowski of Innovative Technology Partnerships, a consultant to the Regional Coalition of LANL Communities (RCLC), told the Los Alamos Daily Post Tuesday that it is anybody’s guess what will happen at this point, but the chickens have come home to roost for the “nightmare scenario” that he spoke to almost two years ago before the RCLC.

“Because Triad can’t do anything to change their (taxability) status and they do not have to pay New Mexico gross receipts tax, NNSA will probably not reimburse them for it even if they wanted to continue paying it so they will have no choice but to take the exemption. The GRT would be greater than any award fee Triad might earn, which will leave the County and the state high and dry,” he said.

Jekowski, who has worked for more than 50 years in the nuclear weapons business, has most recently focused on long-range scenario planning with the Department of Energy, NNSA and the national laboratories.

Both the County Council and the RCLC have been active on the GRT issue in the state legislature including participating in the fight to pass SB 17, which would have allowed nonprofits running national laboratories in New Mexico to be liable for GRT. That bill was vetoed by Gov. Susana Martinez despite extensive appeals to her by the County, the Regional Coalition and other Northern New Mexico communities.

Chair Izraelevitz sent a letter to the UC Board of Regents as well as other nonprofits during the LANL contract bid process urging them to propose a corporate structure that would retain GRT taxability and to consider the negative consequences of any bid package that would promote a return to a non-taxable status. He told them that supporting LANL has always been a goal for Los Alamos County government and that from its beginnings during the Manhattan Project in World War II to presently assisting the Lab, the County has been proud of its partnership.

Izraelevitz told the contract bidders that when the LANL management structure changed to “for profit” in 2006, the County’s tax base significantly improved as Los Alamos National Security, LLC began paying GRT to the State, which directly benefited the community. He said having a solid tax base has allowed the County to set and fund priorities designed to serve the Laboratory’s mission and workforce, with GRT being the County’s most important funding mechanism.

GRT income to the County increased by some 50 percent when LANS took over in 2006 and those funds have been used by the County for capital improvements, creation of a consolidated dispatch center and more. County officials fear that with the loss of GRT from the LANL contract, funding could return to pre-LANS levels.