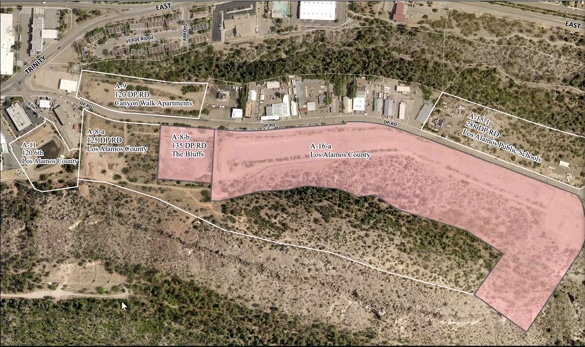 A map shows the areas on DP Road impacted by the radioactive material as well as the location of the new apartment complexes. Screenshot/LADP

Los Alamos County Manager Harry Burgess reported during the Regional Coalition of LANL Communities (RCLC) meeting Friday afternoon that in February and again in May, County contractors discovered radioactive material while working on sewer infrastructure in preparation for the Canyon Walk Apartments and a senior housing apartment complex called The Bluffs.

The areas along DP Road that are impacted are known as A-8-B, which is the future site for The Bluffs, and a large swath of land labeled A-16-A. Both parcels are located near the entrance of DP Road from Trinity Drive. This land was originally owned by the Department of Energy (DOE).

A plan to address the material has not been fully developed, Burgess said. Nor has it been determined how the cleanup effort will be funded or who the responsible parties are. In the meantime, a buffer zone has been created between the contaminated and uncontaminated areas by backfilling with clean soil.

One of the meeting attendees, Tom Allen, asked why construction on the Canyon Walk Apartments could continue.

“It feels rush,” Allen said. “I understand the reasoning (for wanting to continue the project) but it seems NMED (New Mexico Environment Department) has the power to stop work.”

Burgess said while NNSA provides NMED with weekly reports, NMED has not issued any stop work orders. He mentioned earlier that both the Bluffs and Canyon Walk Apartments are affordable housing complexes for which developer Bethel Development, Inc., has received low income tax credits from the state. One of the requirements for these tax credits is that the complexes be completed in a certain time frame. The Canyon Walk Apartments need to be completed and receive a certificate of occupancy by the end of the year and the Bluffs are scheduled to be constructed in 2021.

After the meeting, the Los Alamos Daily Post asked Burgess about Bethel’s response to the two discoveries of radioactive material and whether there was concern for the health and safety of residents moving into the apartment complexes.

“Bethel is currently continuing its development due to its requirements to be complete by Dec. 31,” Burgess said. “We are awaiting a plan (from NNSA) for how to address the cleanup before any determination of health/safety needs can be made.”

Burgess reported that in February, while trenching soil to install sewer infrastructure for the Canyon Walk Apartments, the County contractor discovered a crucible and glass-like material.

“They encountered material not consistent with what they expected,” Burgess said.

The infrastructure work, which involved connecting a sewer line to a lift station was halted to determine what the material was, he said.

Burgess said the Los Alamos Fire Department and NNSA tested the material the following week and the results showed that the glass-like material had remnants of plutonium and the crucible was made of lead.

“There were concerns for workers’ safety and the public’s safety,” he said.

Subsequently, the County had conversations with the NNSA for its expertise on the issue and as well as to determine liability.

In response to the discovery, Burgess said the soil was covered and weighted down to keep the dirt from becoming airborne.

In addition to covering the soil, a fence was installed and NNSA stationed its staff at the site while the County worked on an alternate route for the sewer line. The NNSA staff collected materials and assisted workers, giving them personal protective equipment, Burgess said.

At the time of discovering the contaminated material, he said, the County had two concerns: Why was the material there and how would it impact the developer’s needs on the north side of the street where the Canyon Walk Apartments are being built.

He added that the NNSA was willing to bring in a team that would be responsible for the radioactive material.

Later in May, the County encountered the second radioactive area. Burgess explained that workers were excavating for a new lift station for the County’s sewer system when they discover the material, which was was found to be embedded with uranium.

The discoveries were completely unexpected, Burgess added, because when reviewing historic records there is nothing to indicate that the area was used for waste storage.

In response to this new discovery, Burgess said the County’s contractor stopped work on the excavation and the NNSA tasked one of its contractors with the work. Additionally, he said the County has coordinated with Bethel to find a new route for the sewer line.

Burgess reported that the County received the land from the Department of Energy at various times. DOE transferred the land through a quit claim dead and the cleanup work, which the federal government was responsible for, was completed. The work included removing structures as well as a layer of contaminated soil. Once the work was completed, Burgess said the land was certified clean for residential use.

During Friday’s meeting, RCLC Treasurer David Izraelevitz asked about the size of the crucible and amount of contaminated material.

Burgess said he didn’t know but reported that the material filled three barrels.

When asked why NNSA representatives weren’t participating in Friday’s meeting, RCLC Executive Director Eric Vasquez said that he invited them but due to the COVID situation, they were unable to participate. Vasquez added that NNSA said they felt the County should speak first on the subject and that NNSA officials do plan to attend the meeting in July of the RCLC.