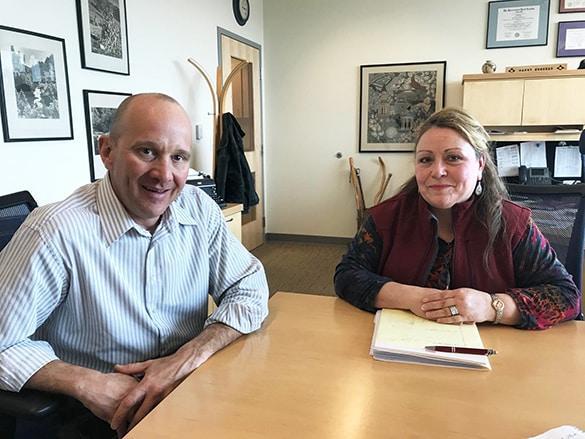 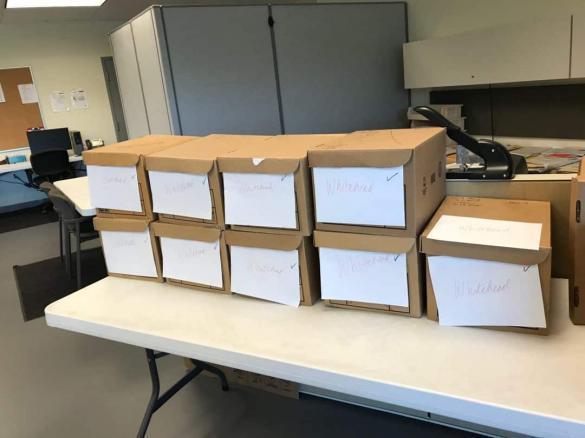 A stack of boxes containing records requested from Los Alamos County under IPRA await review by the requestor. Photo by Maire O’Neill/ladailypost.com

The Inspection of Public Records Act (IPRA) was enacted in New Mexico in 1978, yet for many years, it seems to have primarily been used by journalists seeking information on government activity, attorneys researching for legal cases and entrepreneurs gathering information and statistics. The law requires open access to almost all public records in state and local government, with few exceptions.

A guide to compliance with IPRA posted on the Attorney General’s website states that access to public records is one of the fundamental rights afforded to people in a democracy.

“Even where there is no statute, a common right to inspect and copy public records affords members of the public the opportunity to keep a watchful eye on government,” the guide states. Public policy of the state of New Mexico is that “all persons are entitled to the greatest possible information regarding the affairs of government and the official acts of public officers and employees” and that “to provide persons with such information is an essential function of a representative government and an integral part of the routine duties of public officers and employees”.

In Los Alamos County, Records and Information Management Program Manager Barb Ricci also is the County’s Designated Custodian of Public Records. She holds a Master’s Degree in Organizational Management and has been in the records and information management field since 1999. In a Los Alamos Daily Post interview in the office of County Manager Harry Burgess, Ricci explained that people are seeking more records than ever.

“In the past, people would ask for maybe one or two records. Now what’s happening is that requestors are asking for volumes of records that may span decades,” she said.

Ricci said she just dealt with someone from out of state who wanted large volumes of records from 25 years back.

“Sometimes, it’s like finding a needle in a haystack. When a request is received, I determine who or what division may potentially have these records. If the records are not in our archives, I reach out to the County divisions who must then search their offices and provide the responsive records prior to the deadline,” Ricci said.

Although the public often assumes Ricci has all County records at her fingertips, that is not the case.

Senior Office Specialist Virginia Maestas is the only other employee in the records area. She accepts all incoming records, quality checks database entries, stocks and retrieves records as needed, Ricci said, adding that these days much of her time is spent working solely on IPRA requests.

Ricci said over the past few years the requests are so laborious and time-consuming that she now records the number of records she produces in response to IPRA requests so that the volume and size of requests can be analyzed by her supervisors.

She cited a recent request that involved 15 boxes of records that included both active and inactive records that she had to pull from different County divisions. She said the request included electronic records many of which were stored on compact disks from individuals who have left the County’s employment.

A review of IPRA requests processed between January 2016 and mid-June 2018 as logged by Ricci gives an overview of the information being requested from the County and by whom. As expected, there are requests from local and state newspapers on a variety of issues, requests from attorneys for background data for court cases, requests from those curious about the salaries of County officials and employees, and requests for incident reports from the Los Alamos Police Department in connection to arrests or accidents.

What stood out, however, were individual requests that resulted in 15 to 20 “copier paper” boxes of documents for review by each requestor. Those records sit in Ricci’s location sometimes for months waiting for the requestors to come in and review them. Ricci said with only two people working in her department, it is often impossible to fulfill large requests like these within the 15-day timeframe and that requestors are not always understanding.

In May 2017, Lisa Shin, now a candidate for House Dist. 43, and others were requesting records pertaining to the recreation bond election issue. Former resident Patrick Brenner requested emails connected with an email he sent in May to the Los Alamos County Council. Those IPRA requests later became the subject of a lawsuit filed against the County.

In June 2017, a request by Greg White, now a candidate for County sheriff, asked for “any and all records pertaining to the old and new Nature Centers/PEEC to include “emails, contract bids, accounting information, transcripts, video/audit of meetings” and more from 2000 to 2016. The fulfillment of this request took an estimated 368 hours and filled some 14 boxes with documents for White’s review, yet it was unclear what particular information White was actually hoping to find.

In December 2017, requests began to filter in for information on the expenses of the Regional Coalition of LANL Communities. David Neal of El Rancho asked for some 682 documents, which took an estimated 100 hours to research but he only took 93 of those documents. Neal later requested an additional 262 records related to the RCLC.

January 2018 saw the beginning of a trend involving requests for emails, correspondence, phone calls and personnel records for specific County employees and councilors. An example of this was the 893 records produced for Shin from Chief Building Inspector Michael Arellano’s emails from which she took 113 pages and paid $39.20.

Throughout spring, requests were processed from County Council candidate Helen Milenski, local resident Heather Ortega and others for notices of violations issued by County code enforcement personnel including one from Ortega, which involved 801 email records.

In April, 6,796 emails and attachments were printed involving an estimated 380 hours of work for a request from James Whitehead, a candidate for County sheriff, who asked for all emails sent to and from former Community Development Division Director Chris Wilson from January 2017 through April 2018. Again, in this request it was unclear what Whitehead was actually hoping to find.

In May, White requested 19 months of emails sent to and from seven County Councilors, including former councilors Steve Girrens and Kristin Henderson with no specific topic or subject of interest. This request remains open, pending further clarification. Also, in May, the law firm of Adams & Crow began requesting extensive records in connection with the investigation on the RCLC that they are conducting on behalf of the County.

In the last month, Shin has asked for records pertaining to a 2010 petition circulated by local resident Richard Hanneman related to the former Los Alamos County Municipal Building adjacent to Ashley Pond, including the signatures on the petition. Los Alamos County Council Vice Chair Christine Chandler, also a candidate for House Dist. 43, as well as Robyn Schultz, chair of the Los Alamos County Democratic Party requested all records requested by Shin.

Ricci said all records must be carefully checked to determine if they require legal review and if certain content cannot be released. Should records need to have content redacted, Ricci is required to indicate which IPRA exception supports the redaction.

Burgess pointed out that when a request is received it doesn’t just involve Ricci’s office because it’s not all in her possession. He pointed out from examples in the monthly IPRA requests log how many County employees can be involved in just one records request. He said the requests Ricci receives are often unclear and the requestor must be asked if they can make their request more specific. He said County attorneys and other employees are busy with everything else going on with County business and IPRA is an additional task for them.

“And none of us are sitting around idle to start with, so it conflicts with the daily duties of staff,” Burgess said.

The Act requires the “custodian receiving the request to permit the inspection immediately or as soon as is practicable under the circumstances, but not later than 15 days.”

“We do our best to fulfill the request within three business days, however if we can’t meet this timeframe, I send a letter to the requestor informing them that additional time is needed to complete their request,” Ricci said. “Another challenge is that we are not just dealing with one request at a time but many requests,” she said.

In FY2018, the County received more than 1,800 IPRA requests resulting in thousands of records pulled for inspection.

Ricci said she develops a positive rapport with the requestors who come in and inspect the records in her office. Sometimes she said, the requestor states that no matter how long it takes or how difficult it is to fulfill the request, they want all the documents, which can result in thousands of records.

“When someone’s on a mission to find information, and they ask for ‘any and all records’ pertaining to the subject, the Attorney General’s Office says we have to provide it. So, we do our best to find and provide the records, but we ask that requestors be specific in their requests, so we can narrow down the search time and deliver their request quicker,” she said.

Ricci said one of her main responsibilities is to train County staff and County Councilors on managing the records they create but due to the large volume of IPRA requests this has been limited.

“That’s a challenge we have to face internally but can’t be addressed due to the flat budget that’s in place for this year,” she said.

Burgess said he thinks the important part is for folks to understand what the process is and what it entails.

“I think citizens can get frustrated when we don’t understand the request or when it takes longer than they anticipate because it’s all electronic and we should be able to spit it out immediately whereas it is clearly a broad and involved process,” he said. “I think it’s philosophically important for the public to have access to our records. I think there are some things that could be done to prevent some of the work we have to do.”

Burgess gave the example of a request for something the County already has posted online and publicly available in some reasonably accessible format.

“I would love to see that excised from the law. Even though certain information is available on our website, we’re still obliged to go through the same process for those requests,” he said.

Ricci said if she knows the information requested is on the County website she sends the requestor the link, but the challenge is when the requestor is asking for emails associated with a Council decision, what happened before and after they made that decision, and who was involved.

“When electronic records are sought, we search using key words to narrow the amount of records, but it still requires extensive research,” she said.

Burgess said people think that records got neater because of electronic communications but there are actually more records because of that.

“We didn’t have email before, so it was always phone calls and that’s a lot of what goes on in emails. Although it’s there in black and white, it’s still just that communication,” he said.

Ricci said technology is changing rapidly. Electronic records no longer just reside on the desktop computer, but on tablets, USB drives, CDs, DVDs, phones, social media and other repositories, which adds to the search time. She said other County employees have to provide the responsive records within their custody so many people are involved in fulfilling IPRA requests. 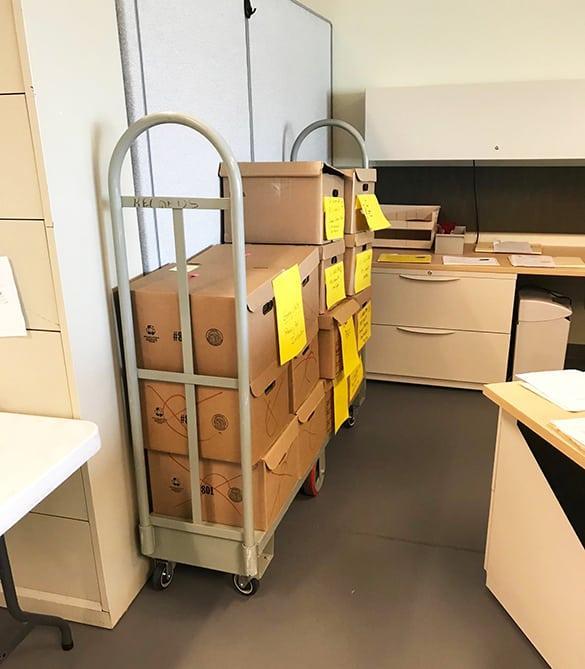 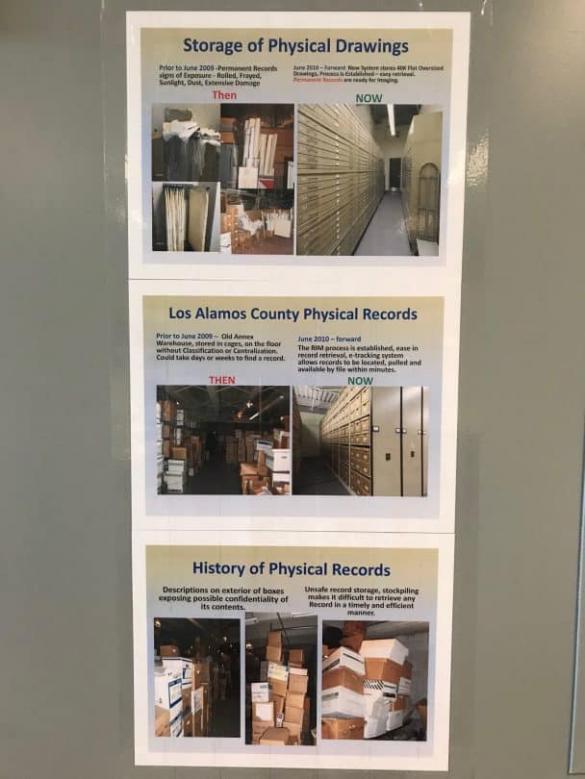 A sign on the wall in the Los Alamos County Records Division shows the transformation of the storage of records since the demolition of the warehouse in which they were formerly housed. Photo by Maire O’Neill/ladailypost.com