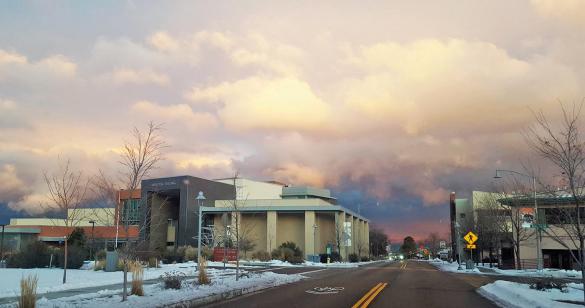 The setting sun casts a pastel hue to the clouds floating above the Municipal Building in downtown Los Alamos. Photo by Carol A. Clark/ladailypost.com
By KIRSTEN LASKEY
Los Alamos Daily Post
kirsten@ladailypost.com

All in all 2019 was a productive year for Los Alamos County government. The County made advances in economic development, welcomed new faces into different leadership positions and set into motion several capital improvement projects for recreation.

Here are a few of the highlights:

With the results of the November 2018 election finalized; James Robinson, Sara Scott, David Izraelevitz and Randall Ryti each earned a seat on the County Council and started their terms in January.

After several fiscal years of having to make tough decisions regarding Los Alamos County’s budget due to uncertainties with Los Alamos National Laboratory’s gross receipts tax, the County Council was able to break that cycle April 23. https://www.ladailypost.com/content/county-council-approves-1993-million-budget

The assurance that this revenue will be paid allowed the Council to not only approve every department’s budget but also most of their requested budget options. The council unanimously voted to approve the $199,328,646 budget.

The assurance that this revenue will be paid to the County allowed the Council to not only approve every department’s budget but also most of their requested budget options.

Plus, it allowed to the Council to replenish funding in several areas:

The council also approved a slate of capital improvement projects:

In a 5-2 vote, Los Alamos County Council approved Oct. 15 an ordinance adopting an economic development project for public support, which is a grant of 6 parcels of land totaling approximately 2.6 acres on 20th Street, to TNJLA LLC. The grant, valued at $1,825,000 and includes the value of the SmartHouse land, which appraised as vacant is $1,400,000. TNJLA LLC plans to build an 86-room extended-stay hotel on the land as well as a conference center that will accommodate between 250-300 people. https://www.ladailypost.com/content/council-approves-ordinance-grant-20th-street-parcels-new-hotel-conference-center-tnjla

The land grant was a controversial issue with many in the community pointing out the pros and cons.

During a regular council meeting Oct. 1, Councilor Randall Ryti said, “This project has a lot of pros and a lot of cons to it. The one thing that most concerns me is the unquantified detriment to the local businesses.”

He pointed out that a study commissioned in 2017 regarding the need for hotels in Los Alamos County predicted that there would be a decrease in occupancy for hotels.

Council Chair Sara Scott said she felt the land grant will be a benefit. She explained the County would grant the land because, “When the County relayed the long-standing interest in a conference center … the developer worked with the franchiser to obtain a waiver to allow the construction of a collocated conference center, developed a Local Economic Development Act (LEDA) proposal to help support the inclusion of a conference center in the project, and submitted it for review…”

She added that the expected return on the County’s investment would be about $3.5  million in taxes (this is the local portion of taxes only and estimated using comparison to similar businesses in the County), a conference center in the downtown area, and the operation and maintenance of the conference center.

Shelton served as Public Works Director for seven years but he has had experience in public utilities. Previously he ran water and wastewater utilities in Steamboat Springs, Colo., for about five years. Before that, Shelton said he worked in Black Hawk, Colo., running its water system.

Additionally, Shelton said he earned a civil engineering degree from the University of Colorado at Boulder, which focused on water treatment.

“I’ve always been interested in water,” Shelton said. “So, it was a great opportunity to get back to the water business.”

Laurent officially stepped into the Public Works Director position Nov. 4, but she isn’t really a newcomer. Previously, Laurent worked for seven years as one of the County administrators. She was the Community Economic director as well as Capital Projects and Facilities director. She left to work as the Community Development director in Park City, Utah for four years.

Laurent said she was interested in returning to Los Alamos because “I wanted to make a difference.”

Design plans for the new splash pad and kiddie pool were unveiled to the community this year along with the plans for improving the ice rink and golf course. https://www.ladailypost.com/content/parks-and-recreation-board-updated-cips

These recreational capital improvement projects (CIP) had a roller coaster start. It began with a contentious bond election, which ultimately failed to pass, then council approved CIP funds for these recreation projects but work was halted on them due to budget concerns.

Now, actual construction on many of these projects are expected to begin this year.

Ice Rink
The configuration was developed for the ice rink’s locker rooms as well as the restrooms. Additionally, a building profile for the rink’s exterior was created along with structural provisions to accommodate a future potential observation deck—a request made at a public meeting.

The Planning and Zoning Commission approved a site plan amendment for the new, expanded locker room facility. The square footage will increase from 700 square feet to 2,300 square feet.

The improvements planned for the golf course include the irrigation system. There will be about 1,440 sprinklers in the entire system. The entire turf edge will be surrounded by park service sprinklers, which allows the water to be targeted solely on the grass and not areas that don’t need water.

Kiddie/Multigenerational Pool
The kiddie pool will be a new addition to the Larry R. Walkup Aquatic Center.

The project will feature the following:

Splash Pad
The splash pad also is taking shape. It will be located near Pinon Park in White Rock.

The size of the pad will be 1,270 square feet. The project will offer a mix a science and nature themed water features. It will also operate on a flow-through water system.

Besides the water feature there will be some seating such as a wall made from refurbished concrete of the old shuffleboard pads. Plus, large umbrellas will be used to give shade.