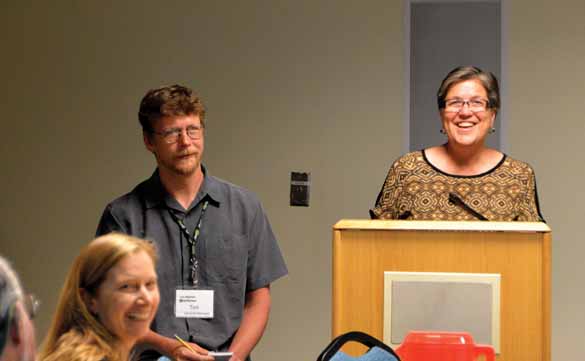 Co+op General Manager Tim Morrison and Board Treasurer Karen Kendall discuss new plans for the store during a presentation Tuesday at the League of Women Voters ‘Lunch with a Leader’ at Mesa Public Library. Photo by Carol A. Clark/ladailypost.com 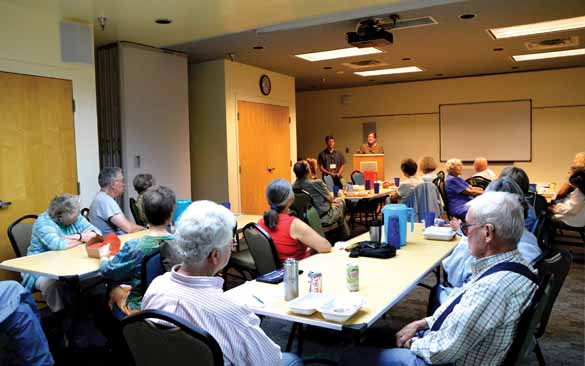 League of Women Voters and guests listen to a presentation Tuesday on the Los Alamos Co+op Market. Photo by Carol A. Clark/ladailypost.com
By CAROL A. CLARK
Los Alamos Daily Post

New plans for the Los Alamos Cooperative Market were unveiled during a recent presentation at the League of Women Voters monthly Lunch With A Leader.

Board Treasurer Karen Kendall was joined by new General Manager Tim Morrison at the talk Tuesday at Mesa Public Library.

They described new features in the store including a kid’s sand box, community art program, Sunday individually made omelets and an evening hot bar created by the team in the Deli.

“We will be re-establishing the volunteer program slowly and in a way that makes financial sense for the store,” Kendall told the group. “In September, the very popular ‘Shop with a Chef’ program will be returning.”

They recapped a number of challenging events that occurred in 2015 including the lack of a quick reaction to a drop in sales due to the opening of Smith’s Marketplace, some bad hiring decisions, management not consistently following cooperative values resulting in employee frustration, margins and labor not aligned with lower sales and frustrated customers.

During this rough patch the Co+op lost its long term general manger, went through two more GMs and four interim GMs, including the shock of the unexpected death of one general manager. In 2015, the store loss was just under $200,000. The Board modified how it worked with the general manager and reached out to La Montanita and to National Cooperative Grocers (NCG), Kendal said.

“We signed an agreement with National Cooperative Grocers and now have a consultant working very closely with Tim and his team,” Kendall said. “We have 27 wonderful employees, many who stuck with it during 2015. They are a dedicated, enthusiastic group of people and the Board feels very fortunate to have them on the team.”

Things are beginning to turn around at the store following the rocky period in 2015 that Kendall and Morrison call the “year from hell”.

Morrison said that NCG helped put together a plan for 2016, which the store is following for sales, cost of goods sold and personnel cost targets.

“When it comes to clean, healthy eating – the Co+op is your resource,” Kendall said. “In my own life, I look at the trade-off of what I spend on feeding my family with locally grown and produced food and compare it to the cost of medical care associated with the alternative. The choice to us is very clear. The Co+op has added or expanded the Field Day products and our Co+op Basic program has excellent price points.”

Audience members asked how they can help and Kendall said, “When I am asked what people can do to help the Co+op survive – my answer is the same and very easy. Shop and encourage your friends and neighbors to Shop also.”

Audience member Jill Foreman spoke from personal experience in telling the group,” The Co+op is the best place in town for dinner … the casseroles and soups are wonderful and the sunsets if you sit outside are fantastic. The Co+op has the best food, the best prices and the best people.”