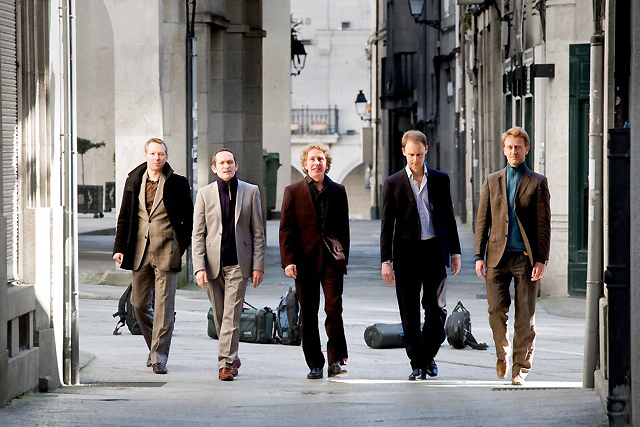 On April 7 at 4 p.m., the Los Alamos Concert Association will present the Calefax Reed Quintet as the fourth concert in its 2012-2013 season.

Calefax is in great demand worldwide, not least because of their unique instrumentation: oboe, clarinet, saxophone, bass clarinet, and bassoon.

The San Francisco Classical Voice notes “with a wider dynamic range than strings, and breath that can last longer than a single bow stroke, the Calefax achieved some stunning phrasing.

Debussy’s oceanlike swells were prime examples of this. It was a luxury to hear them in such artistic hands in this unusual instrumentation.”

The five musicians arrange, recompose and interpret music from eight centuries to suit their unique instrumentation. From early music to classical and jazz to world premières, in the hands of Calefax it all sounds fresh and new.

The history of the group goes back to 1985, when the Amsterdam grammar school Barlaeus celebrated its century-long existence with an opera by Willem van Manen. It was performed by the pupils of the school.

Four boys from the school orchestra decided to further develop themselves musically in a wind quartet. They dared to ask Willem van Manen, an established composer, to write a piece for them.

To their surprise, he contacted them in the Summer of 1985 with the message that he had finished the piece. He had added a clarinet to their ensemble, which appeared to be an enrichment of the sound spectrum.

This piece, Barlaeus Blaaskwintet, premiered in November 1985 in the Ysbreker, an event now marked as the official birth of Calefax. The German teacher from the Barlaeus, Geert Kapteijns, played the clarinet on this occasion.

He quickly left the scene, and eventually Ivar Berix joined the quintet in 1987. With Berix, Calefax recorded their first CD in 1992, brought out by Channel Classics.

The CD featured Circusmuziek by Ton ter Doest, still by far the most played original piece for reed quintet. With two saxophones the middle range was over-represented. When Lucas van Helsdingen started to play the bass clarinet, a better balance was achieved.

With the musical instruments Oboe, Clarinet, Saxophone, Bass Clarinet, and Bassoon, the current instrumentation was established. The ensemble is so fond of this instrumentation that it aims to make it as common as the string quartet and the saxophone quartet. And with good success, signified by the many positive reactions and the creation of reed quintets from Argentine to Japan, and from Denmark to Australia.

After the position of bass clarinet was taken by Jelte Althuis, Calefax recorded a CD of works by Debussy and Ravel. This was the first of eight CD’s on the German MDG label, and the first recording to attract international attention.

The position of oboist was taken in 1997 by Oliver Boekhoorn, completing the current personnel line-up of Calefax.

Inspired by the Riciotti ensemble, the illustrious Dutch street orchestra that has for some time included some Calefax members, the reed quintet played standing, and often by heart – a practice that is kept to this day. In the beginning the group tried to play mainly their own compositions; headstrong thinking – “What Van Manen can do, we can do as well.”

Quickly, however, they realized that arranging existing pieces was easier because of their higher quality.

Calefax has released sixteen recordings for the renowned German label MDG, as well as for their own label, Rioja Records, each garnering rave reviews from the international press.

Two recent recordings featured CalefaXL (Calefax Extra Large), for which Calefax was expanded to twelve reed players. In 2004, Calefax started publishing (for online sale) its most successful arrangements in the Calefax Edition. As a result, several reed quintets have been formed all over the world.

Through master classes and workshops the Calefax musicians pass on their specific ways of working and musical experiences to new generations. For musicians, composers, and audiences, Calefax continues to be an inspiring chamber music laboratory.

DINNER TICKETS: a few dinner tickets remain for dinner with the Calefax Reed Quintet. Leave a message at (505) 662-9000 to purchase dinner tickets.

HELP LACA EXPAND ITS AUDIENCE: Bring up to two people who have never been to a LACA concert to one of the remaining concerts this season and they will sell them half price tickets at the box office. Just print this form (PDF version) or this one (Microsoft Word version), fill it in, bring the guest(s) and your own ticket to the box office on the day of the concert to get this special deal.