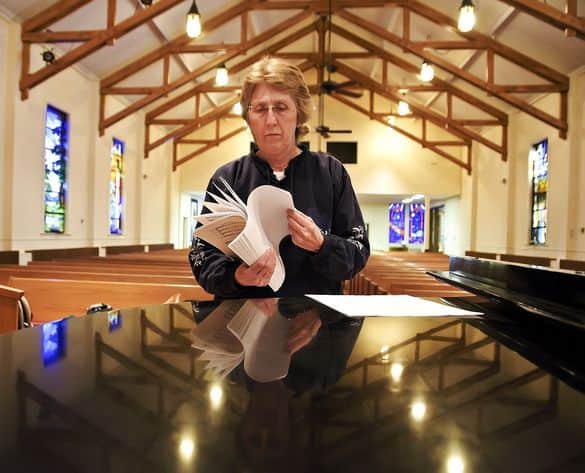 Los Alamos Choral Society Director Dr. Mary Badarak checks the music before the start of Tuesday’s rehearsal to determine which songs will pratice. Photo by TK Thompson/ladailypost.com
By Mandy Marksteiner


The Los Alamos Choral Society presents their spring concert, entitled “Love In Bloom,” at 3 p.m., this Sunday at the United Church of Los Alamos.

There will be a second performance at Cochiti Lake on Memorial Day.

They will perform, “How to Talk to Turtles, (a love song),” by Mary Badarak, LACS’s director. It opens with the lines:

In voices low and sweet…

And continues to explain how one can patiently get a turtle to come out of it’s shell. The playful piece fits their theme of love and romance theme, but with a twist.  The music is a dialogue between the group and a turtle.

Badarak, who works as a librarian, met poet Michele Heeney at the Cochiti Lake Library when the poet shared several volumes of her poetry with the library.

Badarak calculates her years directing LACS (six) by mentally running through the repertoire they’ve performed. Every year The Chorale performs a large and serious concert with the Los Alamos Symphony Orchestra. Their spring concerts are light and fun.

Before moving to New Mexico, Badarak taught music theory and composition at the University of California, Santa Cruz. She founded the Santa Cruz Chorale, which she directed for 12 years. She then taught music at Georgia State University in Atlanta as well as at Clayton College.

Bedarak met many of the LACS singers when she guest conducted the Sangre de Christo Chorale and later guest conducted the choir for the Santa Fe Community Orchestra’s performance of Carl Orff’s Carmina Burana. When the LACS was looking for a new conductor, those members recommended her.

“I’m really impressed with LACS’s long and dedicated history,” Badarak said. “They’ve been together since 1944. The chorus has grown into a solid, professional-sounding ensemble. We draw our soloists from the chorus instead of hiring.”

They will also perform The Liebeslieder Waltzes, by Johannes Brahms, published in 1870, which were designed to be enjoyed by a variety of ensemble combinations: piano duet, alternating vocal solos, duets or quartets, or full chorus. Their performance features Cindy Little, the Choral Society accompanist, joined by Nathan Salazar, as duo pianists who will also perform several of Brahm’s Hungarian Dances.

Badarak compared the relaxed, recreational atmosphere of the LACS rehearsals with the amateur choral group that Johannes Brahms directed, the Wiener Singakademie.

She said, “Brahms flourished during 1850-1897. He grew up in dance halls playing piano for people who were drinking and dancing. Then he got into contact with his mentor, Robert Schumann, and his wife, Clara. They encouraged him to write music that people would enjoy doing. They got together and played music in a very casual and social setting. These people were partying, literally.

“It reminds me of the beginning of the Los Alamos Choral Society 60 years ago,” Badarak said. “Scientists were working hard all day, and they would take a break to have some fun, singing. When the neighbors started to complain, they moved the party to Fuller Lodge. Since then the group has grown. We like to have fun while striving for a high level of quality.” 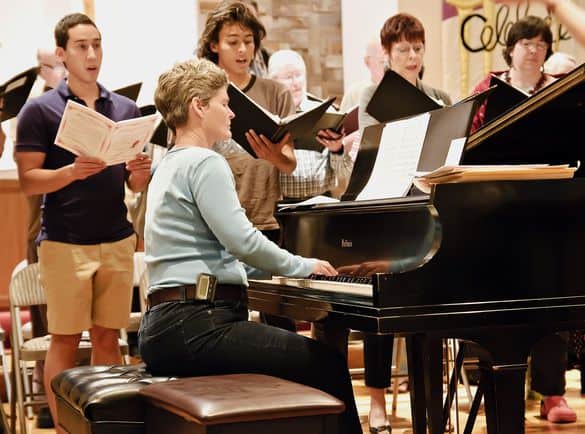 Cindy Little is the accompanist for the Los Alamos Choral Society. Photo by TK Thompson/ladailypost.com

The Los Alamos Choral Society in rehearsal at the United Church. Photo by TK Thompson/ladailypost.com 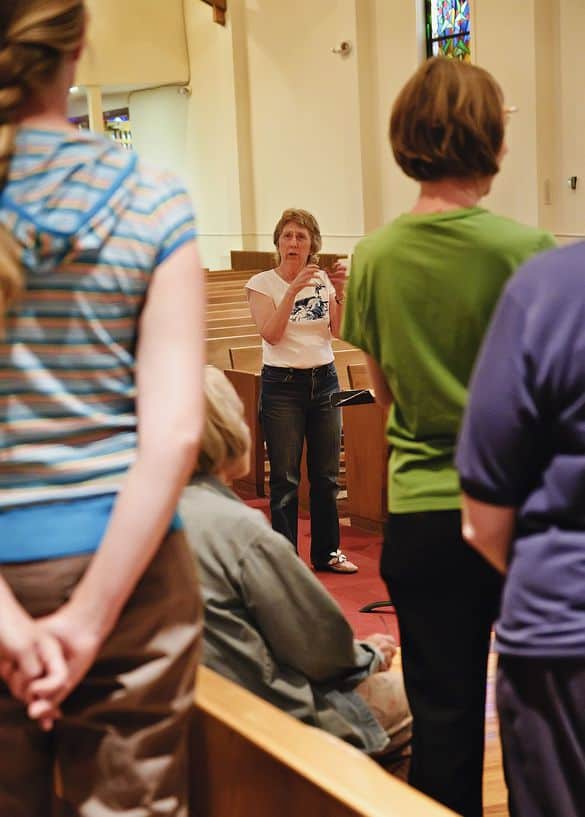