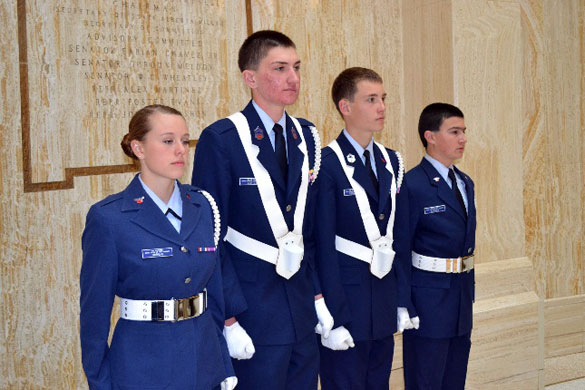 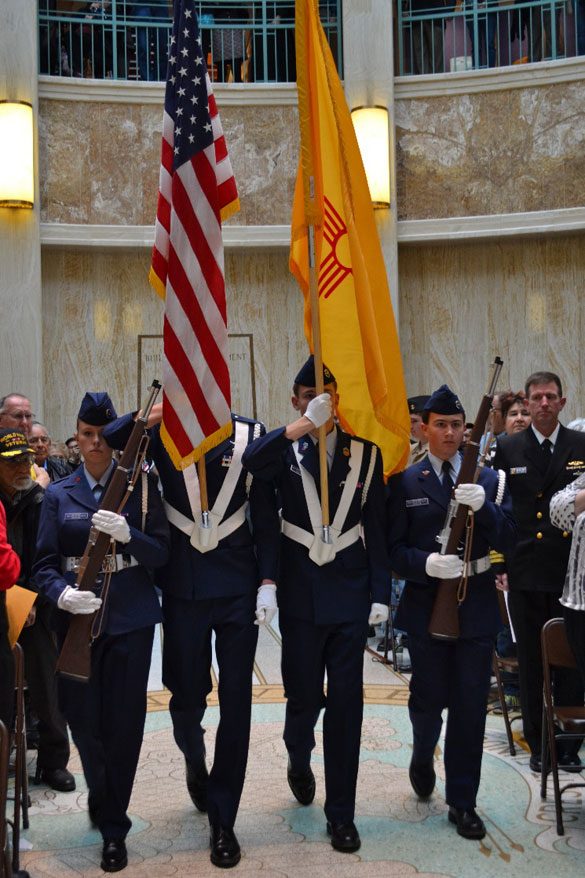 Los Alamos CAP cadets served as a color guard during the ceremony.

Members of the World War II CAP was awarded a Congressional Gold Medal in a ceremony last December in Washington, D.C., as Congressional leaders presented the medal to CAP’s national commander and to 46 living CAP veterans of World War II. The honor recognizes CAP’s founding members’ roles in protecting the American homeland and carrying out numerous wartime missions. The House of Representatives and the Senate earlier approved the award.

Families of three of New Mexico’s World War II CAP members received bronze replicas of the gold medal at the Roundhouse ceremony. These replicas are identical to those presented to living veterans at the Washington ceremony. The wartime service of the late CAP members Robert S. Chamberlin, John F. Davis, and James Taylor were recognized.

In New Mexico, CAP members performed a variety of wartime missions, including border patrol, search and rescue, forest-fire patrol and courier flights. The New Mexico Wing of the CAP, formed in 1941, has continuously served since that time, and now has more than 1,000 members in squadrons throughout the state, 16 aircraft, numerous vehicles and extensive communications facilities. Two of the 65 CAP members who gave their lives during the war were from New Mexico.

Civil Air Patrol, the official auxiliary of the U.S. Air Force, is a nonprofit organization with 57,000 members nationwide. CAP performs 90 percent of continental U.S. inland search and rescue missions as tasked by the Air Force Rescue Coordination Center and is credited by the AFRCC with saving more than 80 lives each year.

Its volunteers also perform homeland security, disaster relief and counterdrug missions at the request of federal, state and local agencies. The members play a leading role in aerospace education and serve as mentors to more than 22,000 young people currently participating in CAP cadet programs. CAP has been performing missions for America for 70 years. For more information, visit www.gocivilairpatrol.com.

In-depth information about CAP and its World War II missions and members can be found at www.capgoldmedal.com.