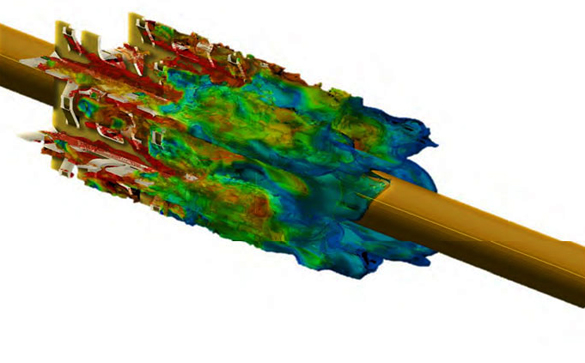 A simulation demonstrates the volume fraction of a bubble phase in the region downstream of a 3×3 rod bundle after a short burst of bubbles has been introduced into the flow field upstream. In a reactor, a large number of entrained bubbles reduce the heat transfer to the coolant, resulting in a lower efficiency in power production. Excessive bubble production through subcooled boiling can result in undesirable local hotspots and the accumulation of excess corrosion and contaminants.

Hard on the heels of a five-year funding renewal, modeling and simulation (M&S) technology developed at Los Alamos National Laboratory as part of the Consortium for the Advanced Simulation of Light Water Reactors (CASL) will now be deployed to industry and academia under a new inter-institutional agreement for intellectual property.

“This agreement streamlines access to the reactor simulation research tools,” said Kathleen McDonald, software business development executive for the Laboratory, “and with a single contact through UT-Battelle, we have a more transparent release process, the culmination of a lengthy effort on the part of all the code authors,” she said.

CASL is a US Department of Energy “Energy Innovation Hub” (http://energy.gov/science-innovation/innovation/hubs) established in 2010 to develop advanced M&S capabilities that serve as a virtual version of existing, operating nuclear reactors. As announced by DOE in January, the hub would receive up to $121.5 million over five years, subject to congressional appropriations. Over the next five years, CASL researchers will focus on extending the M&S technology built during its first phase to include additional nuclear reactor designs, including boiling water reactors and pressurized water reactor-based small modular reactors.

CASL’s Virtual Environment for Reactor Applications (VERA) – essentially a “virtual” reactor – has currently been deployed for testing to CASL’s industrial partners. Created with CASL Funding, VERA consists of CASL Physics Codes and the software that couples CASL Physics Codes to create the computer models to predict and simulate light water reactor (LWR) nuclear power plant operations. VERA is being validated with data from a variety of sources, including operating pressurized water reactors such as the Watts Bar Unit 1 Nuclear Plant in Tennessee, operated by the Tennessee Valley Authority (TVA)

The Validation and Modeling Applications (VMA) Focus Area applies the products developed by CASL to address essential industry issues for achieving the CASL objectives of power uprates, lifetime extension, and fuel burn up limit increases, while ensuring the fuel performance and safety limits are met.

The new IIA agreement makes one of the Los Alamos-developed software tools, MAMBA, available for research, subject to agreements through the consortium partners. In addition, the Hydra-TH application is provided under an open-source license in VERA for advanced, scalable single and multiphase computational fluid dynamics simulations.

CASL, which is led by and headquartered at Oak Ridge National Laboratory (ORNL), has created hundreds of technical reports and publications and wide engagement with nuclear reactor technology vendors, utilities, and the advanced computing industry.

Doug Kothe, CASL Director at ORNL, notes that “CASL has benefitted tremendously from the innovative technical contributions and leadership provided by Los Alamos technical staff and is fortunate to have these contributions continuing as CASL moves into its second five-years of execution.”