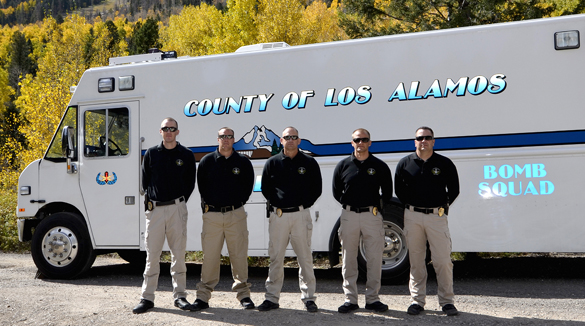 The Los Alamos Police Department is one of six New Mexico police departments maintaining a fully staffed bomb squad certified by the FBI.

Five certified bomb technicians comprise the local squad, which in 2014, responded to five calls. So far in 2015, they have responded to 23 calls.

“The substantial increase in calls is attributed to due diligence and recognition of packages and vehicles that our citizens deem suspicious,” Bomb Squad Cmdr. Preston Ballew said.

In the last three months alone, the LAPD Bomb Squad has responded to 10 calls for service concerning suspicious activity or items, he said. A recent case occurred Saturday, Dec. 5, when an officer observed a vehicle parked in front of the Los Alamos Post Office on Central Avenue. There were indications it may have been a large vehicle bomb improvised explosive device (LVBIED), Ballew said. This vehicle was spotted within an hour of the start of the annual holiday light parade. Because it was parked in front of the post office and on the parade route, bomb technicians were dispatched to the scene.

“With standard operating procedures, a certain perimeter was set up to keep bystanders away from being injured in the event this vehicle did have explosives on board and was to detonate,” he said. “Many times the police and bomb squads must set up perimeters hastily to protect lives and property and may not have the resources to inform the public as to why this is happening. This was the case with this incident on Sunday. LAPD had limited resources to deal with this situation as well as preparing for the parade, which draws hundreds of people to this area.”

The vehicle in question was deemed safe within 45 minutes of the call and the parade started with minimal delay.

“In light of all the tragic events in the United States and countries abroad, a heightened level of awareness is necessary by all,” Ballew said. “LAPD urges our citizens to be diligent in reporting suspicious activity and items so hopefully we can render that activity or item safe, and prevent any more tragedies from happening.”

Each team is comprised of a specific number of bomb technicians that the FBI deems necessary for the area and volume of bomb related calls. All the techs nationwide attend the same basic school in Huntsville, Ala., and Redstone Arsenal. They go through six weeks of training that includes render safe procedures, basic demolition practices, improvised explosive device (IED) recognition and disposal, robot operations, electronics courses and many more areas related to this field.

Because of this training, each FBI certified technician is capable of integrating into any certified team and effectively handling any bomb related call.

Every three years all certified techs must go back to Redstone Arsenal for a re-certification course that is five days long. During these five days, the tech must demonstrate proficiency in all the areas of training they went through during their basic class. In addition, technicians are given new information as it relates to national incidents and intelligence as well as incidents happening abroad.

Direct questions concerning the operation of the LAPD Bomb Squad or Saturday’s event to Cmdr. Ballew at 505.662.8236.