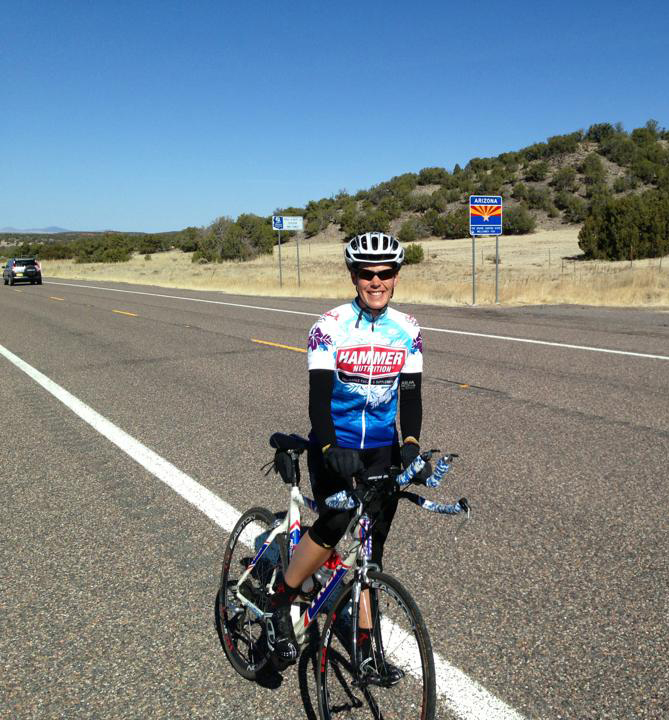 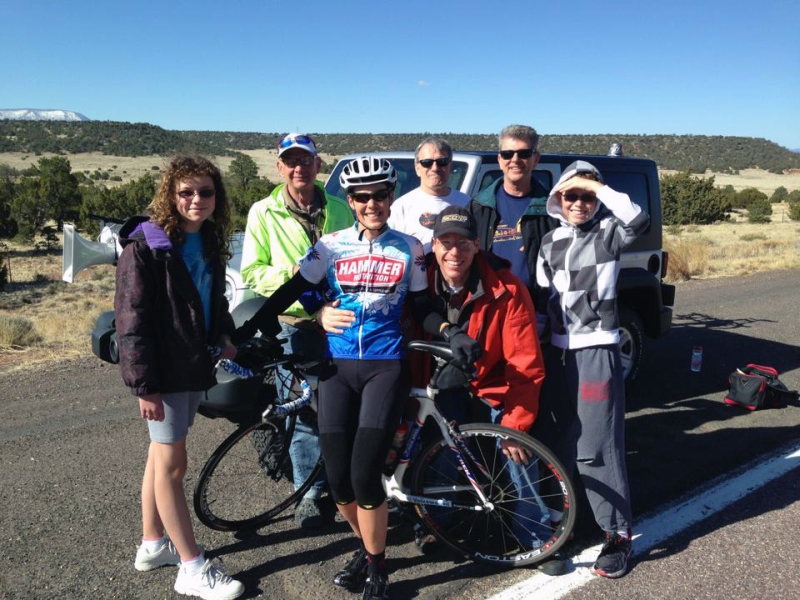 Los Alamos athlete Lisa Dougherty has made significant strides on her Race Across AMerica (RAAM) preparations.

Over the next few weeks, the Ultramarathon Cycling Association (UMCA) Records Chair will review race reports and determine if the new record will stand.

“The official saw no reason that it shouldn’t,” Dougherty said.

Nearly her entire RAAM crew was there to support Dougherty through the race, including her husband, Gene Dougherty who also works at LANL, and there children Allegra and Sean, both Barranca Mesa Elementary School students.

“I finished in 20 hours, 19 minutes, which is an average speed of 19.25 mph, only 41 minutes off the men’s record,” Dougherty said. “I was gunning for the men’s record, but miles of milled road surface and less than favorable winds for a couple hours knocked my speed down too much. I’ll let you know when the results are official.”

Dougherty is a Ph.D. materials scientist, Project Management Professional and Certified Quality Engineer working full-time as an engineer at LANL.

In November, she qualified to participate in the 3,000 mile non-stop RAAM. She will start in Oceanside, Calif., June 11 and finish in Annapolis, Md.

RAAM is a race, but unlike the three great Europeon Grand Tours (Tour de France, Vuelta a Espana and Giro d’Italia), RAAM is not a stage race. RAAM is one continual stage, similar to a time trial. Once the clock starts it does not stop until the finish line, she said, adding that RAAM is about 30 percent longer than the Tour de France. Moreover, racers must complete the distance in roughly half the time allowed for the Tour.

Racers will ride 250-350 miles a day, balancing speed and the need for sleep. They have a maximum of 12 days to complete the race, with the fastest finishing in just over eight days.

Dougherty has worked at LANL since 2006 when she was hired as a postdoctoral associate. When she was in graduate school at the University of Illinois in Urbana-Champaign from 1995-2001, Dougherty raced bicycles with the school’s National Collegiate Cycling Association (NCCA) team as well as with a number of midwest cycling teams.

In 1996, she competed in her first ultramarathon cycling event, the 573-mile Bicycle Across Missouri (BAM) race, finishing first among the women in just over 49 hours.

Conditions were favorable from the start of the ride. On the Arizona border, the temperature was 57ºF with clear skies and a light southwest breeze. Temperatures topped out at 81ºF in the valley around Socorro and bottomed out at 42ºF in the eastern mountains during the night. The wind picked up as the day progressed, blowing steadily around 20 mph, and became a strong crosswind. The wind calmed during the night, and the stars shone down on us from clear New Mexican skies. The allergen levels due to pollination by wind were extremely high.

The route was predominantly east-southeast with 10 miles straight south at Socorro. The course started at 7345’, passed through the Datil Mountains and the Capitan Mountains, and finished at 3788’. The high point on the course was 8119’, and the low point was in Roswell at 3480’. Total elevation gain was 7735’, and total elevation loss was 11,292’.

Why did you want to do a record?

I am preparing for the Race Across AMerica (RAAM) as a solo female racer in 2013, and I wanted to do an event with my crew to help us prepare for the big event. Several of my crew members have never crewed before, so we thought a tune-up event would give them some experience before RAAM and an inkling of what they have gotten themselves into. I couldn’t find any events on the Ultramarathon Cycling Association (UMCA) calendar that worked with my training schedule and my husband’s racing schedule. He is a serious bicycle racer, too, and since he is giving up so much to be my crew chief at RAAM, I want to help him get in as much racing as he can before June. So we decided to do a record attempt across our state since we could schedule it at our leisure, plan a route closer to our home, and get most of the RAAM crew involved to try out equipment and ideas for RAAM. At the same time, I could set a women’s New Mexico state crossing record since there is currently only a men’s record.

What equipment did you use? Anything special?

We used our full RAAM assortment of equipment except for my Veloforma bicycle, which arrived from my sponsor too close to the record attempt to get it set up in time for the ride. We had a Jeep Wrangler as our follow vehicle and a truck camper as our auxiliary vehicle. My primary bicycle was a Trek U.S. Postal 5500 with Profile T3+ carbon aerobars, a Terry Liberator Race saddle, and Easton EA90TT wheels. My spare bicycle was a Cannondale R700.

What did you eat & drink?

My primary nutritional source was Hammer Nutrition fuels and supplements. I relied most heavily on Perpetuem powders as my main food source. I also enjoyed pizza and fruit along the way. I drank mostly HEED with the occasional plain water bottle.

What was the best part?

The best part of the ride was the stretch from the Arizona border to Soccoro. I had a nice, moderate tailwind, and the road was mostly flat with long, modest grades here and there. I live in the mountains of northern New Mexico where there are no easy roads – you are either grinding up a climb or flying down a technical descent. A time trialist at heart, I loved the opportunity to put my head down and motor for hours with the comfort of knowing that my husband and the rest of my fantastic crew would be taking care of me along the way.

What was the hardest part?

After Socorro, the easy roads were behind me. The hardest stretch was during the night when I was climbing into the Capitan Mountains. I didn’t study the course enough before doing it, so I had no idea how long the climb would last, and, at night, I could never see past the next wiggle in the road. As I rounded each bend, I hoped to find the summit but the road kept tilting up another notch. I also ran into a rough stretch about fifty miles from the Texas border. Just as I prepared to increase my effort to challenge the men’s record, the road surface disintegrated. For miles, I dodged bumps and potholes in the dark as I traveled over a milled road surface prepared for repaving. By the time I was done with the construction zone, the men’s record was out of reach.

Did anything particularly unusual happen?

Although not unusual, I suffered a flat tire on my primary race bicycle during leapfrog support. Fortunately, my husband ensured I was carrying a cell phone so I could notify my crew. They arrived within minutes with my spare bicycle, which I rode until the flat was repaired on my primary bike. Otherwise, I enjoyed the stunning beauty and wilderness of New Mexico. At one point, a glorious golden eagle roused from his activities on the side of the road as I passed and lifted to the air beside me. And during a climb, I rounded a bend to find two powerful stags with large racks grazing at the side of the road. They bounded to life up the embankment, and I was sad that my crew wasn’t there to see the sight with me.

When you share the road with large, motorized vehicles, safety is a huge issue, and this ride was no exception. Entering Carrizozo, my crew was leapfrogging me, so they were not around. I was hundreds of miles into the ride, so my focus was on keeping up my speed instead of on two cars racing at me side-by-side. Apparently, a woman decided that she needed to pass a driver as they were leaving the town and I was entering it, and she wasn’t going to give me an inch as she passed. If I had flinched, she would have struck me head-on in her rush to get past the other car. Carefully, I held my line as her driver’s side mirror practically brushed my left elbow.

Other than that single encounter, the people of New Mexico were very accommodating to me on the roads and curious at the service stations, asking my crew questions about my ride. I appreciated the opportunity to share the road with these gracious people and to see the beautiful state of New Mexico from one side to the other. Most importantly, I appreciate my wonderful husband Gene, our children Sean and Allegra, and our RAAM crew members Ken Shipley, Ken Pritchett, and Jerry Rieper for giving up the better part of their weekends to support me on this record attempt. Enormous thanks also go out to our official Gordon Phillips who wins the iron butt award for riding the entire 20+ hours in the back seat of our follow vehicle. Thanks so very, very much to everyone! 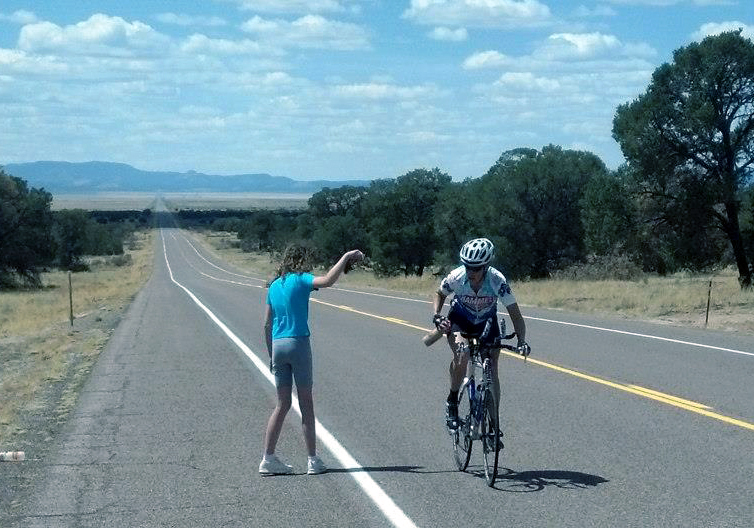 Hand off with Lisa Dougherty and her daughter Allegra Dougherty. Courtesy photo