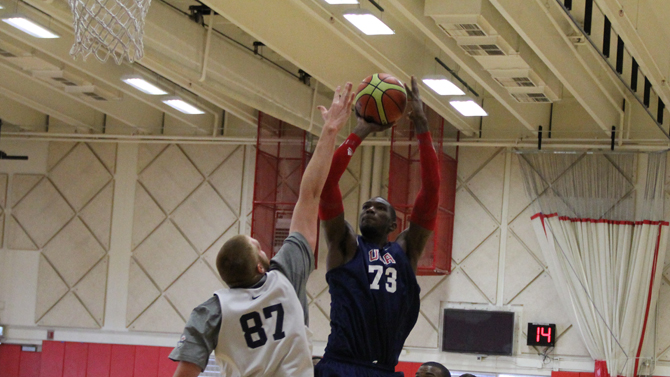 Training camp will continue in Colorado Springs through June 30, and the 12-member roster will be announced prior to the team’s departure for Russia on July 1. The 2013 World University Games (WUGs) men’s basketball competition will be played July 7-16 in Kazan, Russia.

Additionally, P.J. Hairston (North Carolina/Greensboro, N.C.) suffered an injury to his back during the evening session on June 25 and was not able to continue his participation.

“The effort of this group was unbelievable, and it was very tough to get down,” said Jim Boeheim (Syracuse University), chair of the USA Basketball Men’s Junior National Team Committee. “Usually, it’s pretty easy to get down to 16. It was not easy with this group. It was very difficult. Guys were very, very close in a two-day tryout. Another day, and it might have been a couple of different guys in there, but you have to take the guys that played the best, and those 16 played the best.

Randle is a two-time USA Basketball gold medalist, having helped the USA to a 5-0 record at the inaugural 2009 FIBA Americas U16 Championship in Mendoza, Argentina, and an 8-0 record in the first FIBA U17 World Championship in 2010 in Hamburg, Germany.

Following the preliminary round, the first- and second-placed teams in each of the four pools advance to the medal quarterfinals on July 14 to compete for first through eighth places; while the remaining teams will play out for ninth to 24th places. The semifinals will be played on July 15, and the finals will be contested on July 16.

World University Games
The United States has claimed 19 medals in the World University Games since beginning play in 1965, and has captured a record 13 golds, three silvers and three bronze medals in the 20 WUGs in which a USA Basketball men’s squad has competed. The USA men own a stellar 138-9 record in WUGs play, and the U.S. captured six of the first seven gold medals awarded in the WUGs basketball competition, including six consecutive gold medals from 1989 through 1999. In 2001 the USA fell to host China, which featured half of its 2000 Olympic team, including Yao Ming, Menk Bateer and Wang ZhiZhi, by a single point in the semifinal and finished with the bronze. The USA again captured the gold medal in 2005 and most recently, finished in fifth place with a 7-1 record after falling to Lithuania 76-74 in the 2011 quarterfinals.