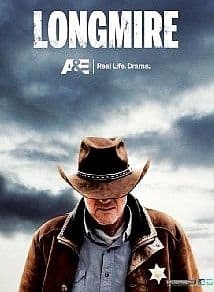 This week, Los Alamos residents will see those familiar yellow and black signs guiding film talent and production crews through town to base camps and film sites within the County.

These signs will post the letters “LM”—for Longmire, The hour-long drama series from Warner Horizon Television, which began filming in March of this year in Santa Fe, Las Vegas and the surrounding areas.

Filming is scheduled to begin tomorrow through Thursday at private homes in Los Alamos and at the Ski Hill.

Based on the Walt Longmire mystery novels by bestselling author Craig Johnson, Longmire is named after its central character, Walt Longmire (Taylor), the charismatic, dedicated and unflappable sheriff of Absaroka County, Wyoming, who is rebuilding his life and career after the death of his wife.

Widowed only a year, he is a man in psychic repair but buries his pain behind his brave face, unassuming grin, and dry wit.

The series has already launched this summer with 10 episodes on A&E.

The production employs at least 130 New Mexico crew members and more than 160 principal and background talent.

For more information on the series, visit www.nmfilm.com.