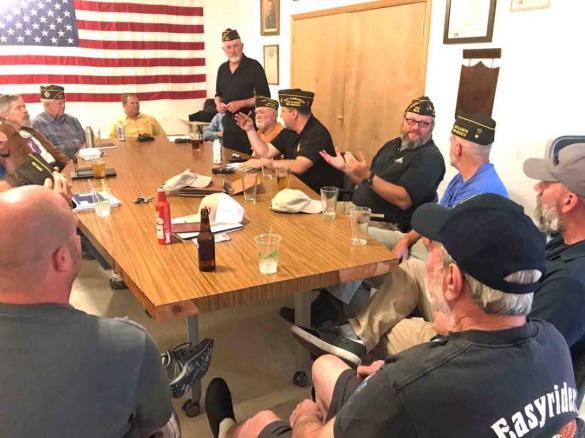 Veterans of Foreign Wars gather at the VFW at 1923 Deacon St. for their regular monthly meeting. Photo by Maire O’Neill/ladailypost.com 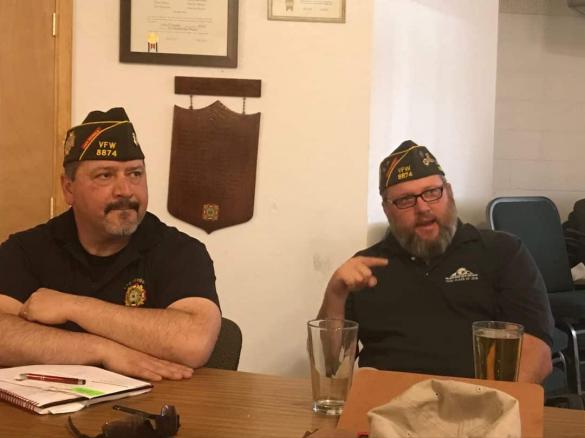 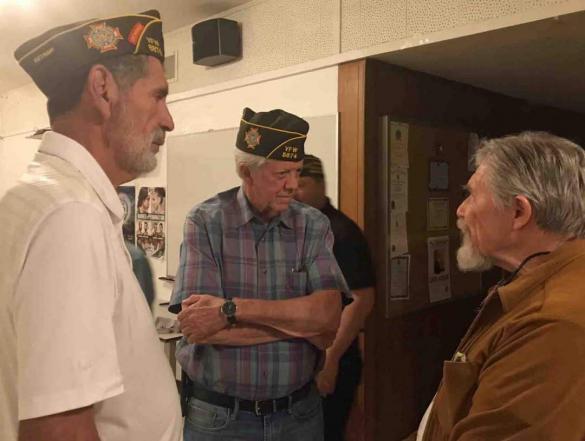 If you didn’t know it was there, you might not notice the Veterans of Foreign Wars (VFW) building between Deacon Street and Trinity Drive. Yet Los Alamos has had a VFW Post for close to 70 years, where veterans have gathered to quench their common thirst for camaraderie and community.

Victor Valenzuela said he arrived in Los Alamos around 1992 and walked into the Post.

“I didn’t know anything at all about the VFW. I just happened to walk in because of the fact that I was in Vietnam and I was a veteran. Paul Elkins, a Korean War vet, was the commander at the time. After I got involved, it turned out to be the camaraderie that kept me coming back,” he said.

Valenzuela has been commander of the Post for several terms and currently serves as its chaplain and facility manager.

Since 1899, the VFW has been a leading veterans service organization. The only requirement for membership is service in a war, campaign or expedition, or in hostile waters. Members of the Los Alamos post have served in World War II, Korea, Vietnam, the Cold War, Somalia, Grenada, Iran Contra and throughout the Middle East. When you spend time with them, you quickly realize that what they miss most when they leave the military is each other.

“This is not a bar, it’s a fraternal club. It welcomes veterans into this space to socialize. To get veterans in here is kind of difficult, because sometimes people think it is just a bar, a hangout, but it’s not. We need to change that perception. It’s a post of the Veterans of Foreign War and we would do anything for our veterans, and our auxiliary members, people whose family members have served,” Valenzuela said.

Junior Vice Commander Jim Nesmith, chair of the Los Alamos National Laboratory Veterans Committee, said that like everyone else he comes to the post for the camaraderie.

“The brotherhood and sisterhood of arms is unique. We all have the same motivation and interest. The post-traumatic stress disorder (PTSD) issue is something that is unnerving for me – to know that so many of our troops have serious, serious PTSD issues. Those people with PTSD frequently self-isolate and getting the word out to them that we have programs to assist them and help them to deal with it is a constant challenge,” he said.

“They don’t have a voice anywhere. No matter who walks in the door, we always find something in common. You won’t find closer relationships. You might not even know their name but you end up with a great conversation,” he said. “I would say to any veteran out there in the community, ‘Come on in. Let’s talk, we’re here’.”

Marine Corps veteran and Post Commander Roger Anaya said he also visits posts in other communities when he is out of town.

“Every VFW you go to, they will welcome you. When people show up here we welcome them as well,” he said.

Bandelier National Monument Superintendent Jason Lott, a Desert Storm vet, said after he had been in Los Alamos for a couple of years, he contacted the state representative for veterans issues and he told Lott to meet him at the VFW.

“I didn’t even know we had one. I came into the post and someone approached me and invited me to a meeting. Usually where I go, people just want to talk to me about National Park stuff, but I don’t come here and talk about all that. It’s a place for me to do something different, have a different line of conversation,” he said.

An Army National Guard veteran, Lott publishes the post’s 14-page monthly newsletter “Thee Gamble Gab”, which includes everything from excerpts from a World War II memoir by Los Alamos resident Joe Bergstein to an article titled “Submarines: A Community Like No Other”, as well as contact information for veterans services and facilities.

Lott’s quick wit makes him the chief instigator of the constant banter among the group.

Senior Vice-Commander Art Brown, an Air Force veteran of Desert Storm, Iraqi Freedom and Enduring Freedom recalled that shortly after he arrived in town, a veteran’s family needed support when they had work done on their vehicle and needed gas money.

“We were sitting there and I watched Eli (Garcia) get into our funds and give him gas money. If you’re a veteran and you walk into this place, that’s the kind of stuff that happens. Eli showed me that and that’s what made me proud. A comrade in arms took care of someone else who is a comrade in arms,” he said.

Brown said there are people who come in here just to take a break from life and talk to people who have similar interests. He said he’s curious how many veterans there are in the community who wonder if they should come to the post.

Several members discussed the importance of reaching out to other veterans in the community to encourage them to come to the post, and the value of taking the time at local events to reach out to new veterans and those who have recently relocated to the area.

Anaya said the post’s goal is to become an All-American Post this year. To accomplish this, the post has to achieve a membership level based on the population of the community, complete a high level of community service and participate in VFW programs such as the Voice of Democracy, Patriot’s Pen, Teacher of the Year and Scout of the Year.

The post will find out next month at the state convention in Albuquerque if they made the prestigious designation.

“Thousands and thousands of hours of community service have been submitted by our Post. Wherever you see service projects being done in the community, you will find VFW members participating. Everyone here also belongs to other service organizations in the community,” Anaya said.

Retired Army Ranger Bob Loy, also a Post officer, said he his and wife Laura are both really invested in community service organizations. He added that the VFW has made donations of both time and money to other veterans organizations such as Horses for Heroes.

“Our youth in the community are listening to our veterans and it’s so nice to see. We’ve got some jewels in our schools. These kids are squared away. In every category they excelled at the national level in VFW-sponsored competitions,” said Loy who coordinates the Teacher of the Year, Voice of Democracy and Patriot’s Pen for the Post. His message to local veterans is, “If you want to be part of something good in your community please join us”.

Valenzuela, who is hailed by the other members as a leader in volunteerism at the Post, discussed some of the Post’s activities, which are particularly important such as visiting the Veterans Administration Hospital and taking clothing and other necessities to veterans there.

“Once you go to the hospital like we do and see those vets that are really in need of assistance, that don’t have any families, you realize how important it is to help people in the community, especially veterans,” he said. “It also gives me lots of pride when we participate and coordinate Memorial Day and Veteran’s Day services and join in the National Day of Prayer. We receive a lot of compliments about our participation in those activities.”

Quartermaster and adjutant Eluterio (Eli) Garcia who has previously served three terms as commander joked that he and the post are about the same age. He explained how the VFW particularly helped World War II veterans and their families.

“Back in that era especially in the smaller communities it was a central gathering, a place to help veterans to make sure they get the assistance they need. And that hasn’t changed,” he said.

Garcia said the post itself wouldn’t be in the great shape it is in without the generosity of local contractors and others who have made significant contributions of financial aid and labor.

Several members, including six-year member Jack Boyd, also commended Valenzuela for his many years of coordinating improvements to the building. Anaya introduced Doug Ditsworth, a newer member who served with U.S. Navy operations in the Red Sea. Ditsworth said he enjoys being at the post because there are not many places to go to meet like-minded people.

Jason Wohlberg, who just moved to town after retiring two years ago from the Marine Corps, said he also enjoys the camaraderie the post offers and that he sought it out after he got to town.

Another aspect of the post is that it serves as a first point of contact for assistance from the Veterans Administration. McDaris, whose day job is with Los Alamos County Human Resources, serves as the post’s Service Officer.

He recommends that any veteran in the community needing help or guidance with their benefits issues stop by the post and take advantage of the resources offered there.

The Auxiliary of the VFW is extremely active at the post. Led by President Maria Valenzuela, the group has expanded since national changes allowing both men and women to join.

In fact anyone who is a husband, wife, widower, widow, parent, grandparent, son, daughter, grandchild, brother or sister of someone eligible for VFW membership can join the Auxiliary. 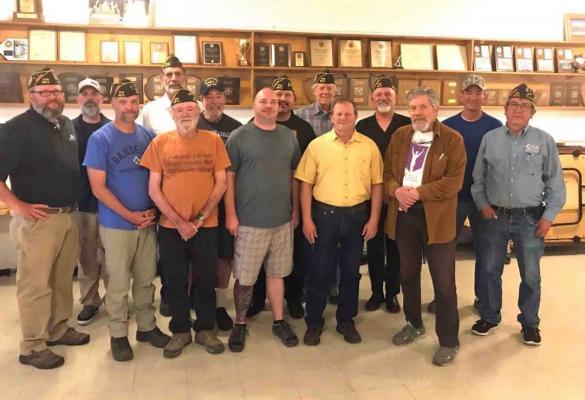 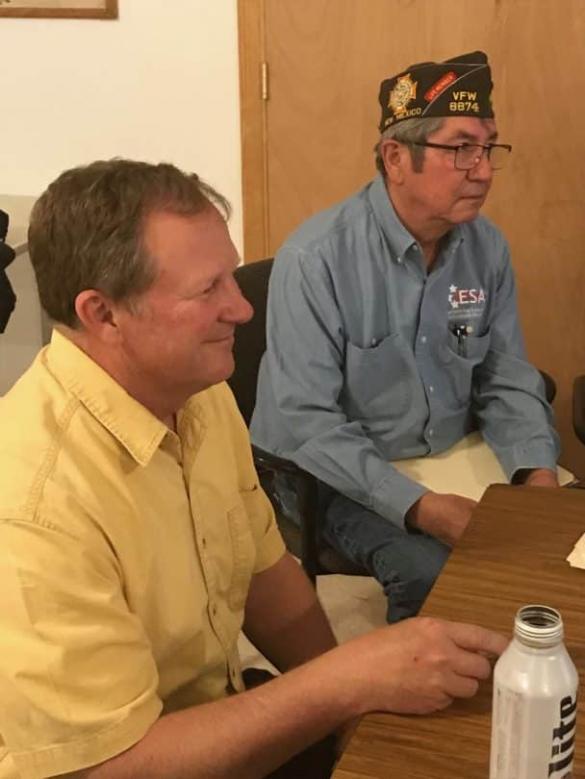 Art Brown, left, and Eli Garcia listen to a story being told by a fellow veteran at a recent VFW meeting. Photo by Maire O’Neill/ladailypost.com 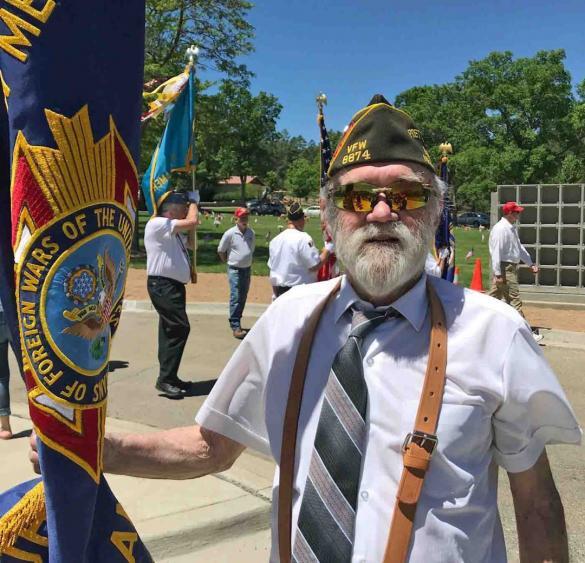 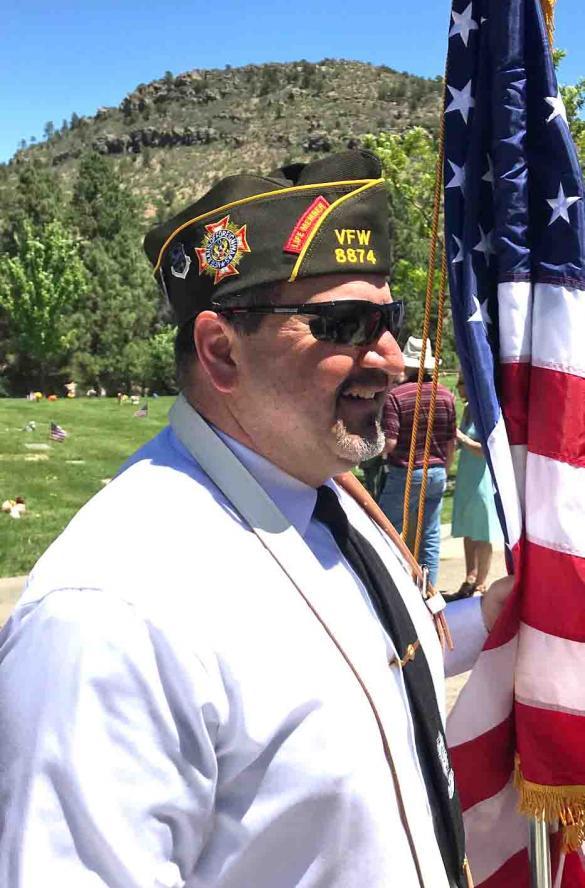