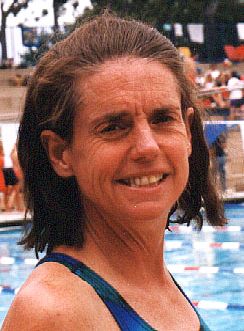 The event is the Federation’s biggest competition in terms of participation, for the reason that it welcomes, every two years, swimmers, divers and water polo players aged 25 to more than a 100 years old from all corners of the world.

Marr works out several times a day at the Larry R. Walkup Aquatic Center as well as with youth on various local swim teams when she has filled in as a substitute coach.

Marr, a graduate of UCLA, in mathematics and physics, retired from Lawrence Livermore National Laboratory.

Marr has been a featured swimmer in Swimming World and Swimmer magazines. Her swimmer profile is featured on the U.S. Masters Swimming website at www.usms.org.

When the FINA World Masters Championship ended, she and her husband rewarded themselves with a cruise in the Mediterranean.

FINA officially created the Masters movement about 25 years ago, the first edition being held in 1986 in Tokyo, Japan, and would later confirm its inclusion at a Congress meeting in Madrid the same year.

The second and third editions of the Championships included swimming events only. But since then (1990), it incorporates FINA’s five disciplines.

The Championships’ biggest reception was reserved for swimming, where the entire Masters community – competitors, spectators and fans – cheered from the stands at the outdoor pool of the “Polisportiva Communale” in Riccione.

It is a quarter past midnight. They are all waiting for the last heat, men’s 50m butterfly, to start. Sergey Mukhin from Russia was the last champion of the day, winning the event in 25.09 (25-29 age group).

And all together, they celebrated a great midnight show after all heats were held during a long, long day.

Long days and sessions confirmed the ever-vibrant interest for Masters swimming all over the world.

A total 77 afiliated member federations, from Andorra to Zimbabwe, were present in Riccione and close to 10,000 competitors in swimming only provided a total 28,878 individual and 1,556 relay splashes at the event – an absolute record in FINA’s history.

“We never expected such a great number of participants. We are very surprised and overwhelmed by this very great interest,” said Paolo Barelli, FINA Bureau Honorary Secretary and President of Italian Swimming Federation. “It shows also the great attraction of Riccione and the Adriatic Sea.”

In the two 50m pools where swimming events took place, no less than 27 Masters World records were set.

The oldest competitors collecting five victories each come from all corners of the world, far away from Riccione and Italy.

Kath Johnstone from New Zealand, born in 1917, picked up five gold medals in the 95-99 age group.

“I started swimming when I was four years old and never stopped,” she said. “Swimming is my passion and that is why I’m here.”

It was her fifth participation at a FINA World Masters Championship.

In the men’s events, Jack Matheson from Australia was the superstar in the 95-99 age group, also walking away with five gold medals.

“It’s better to be here, than at home watching TV,” Matheson said.

Another remarkable Masters swimmer is Nicolas Granger from France, who snatched five titles in the 45-49 age group (with World records in 200m and 400m IM.)

The French suffered a cancer twice, in 1996 and 2003 but his passion for swimming never faded.

“I started swimming in the age of six and never stopped, except when undergoing treatments,” he said. He now feels well and in good health. “I don’t have to prove anything to anyone, but if my story can help someone, I’m glad to tell it.”

Also five-time Masters World champions, Laura Val, the “U.S. Girl” who etched her name in Master swimming history in January 2011 when she established six Masters World records in a single 1,500m event – at every split time – in the 60-64 age group.