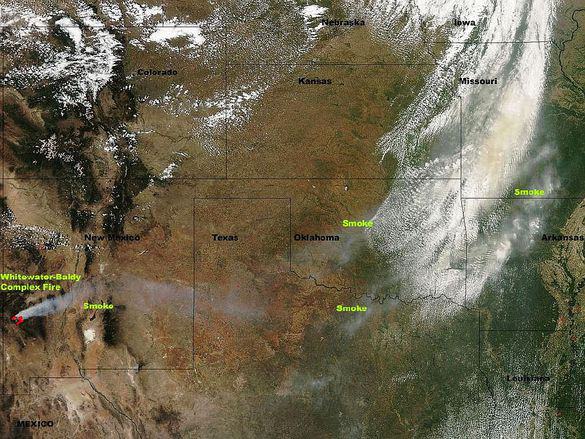 There are no fires in the Los Alamos and surrounding areas.

Deputy Fire Chief Justin Grider said this morning that winds are carrying smoke from the fires burning in Arizona right over the townsite.

The Whitewater-Baldy Complex fires burning and rugged terrain in the Gila National Forest in western New Mexico have been generating a lot of smoke. The smoke has now been swept up by a cold front pushing through the central U.S. and has swept it over at least six states, as seen in a NASA satellite image.

The Moderate Resolution Imaging Spectroradiometer (MODIS) instrument that flies onboard NASA’s Aqua satellite captured an image of the thick blanket of smoke from the massive fire on May 24 at 1945 UTC (1:35 p.m. MDT). The heat from the fires is outlined in red, and the smoke from the fires appears light brown, blowing to the east, as a result of westerly winds. The fire began on May 9 from a lightning strike.

As of May 24 at 9 p.m. MDT, the U.S Forest Service’s Gila National Forest reported that the Whitewater-Baldy Complex covers 70,578 acres. Fighting the fire is difficult because of the steep, rugged terrain of mixed conifer forest, and the strong winds in the region over the last week. The U.S. Forest Service noted on May 24, that the fire remains at 0% contained because of extreme fire behavior and rough terrain. For updates on the fire, visit: http://www.inciweb.org/incident/2870/.