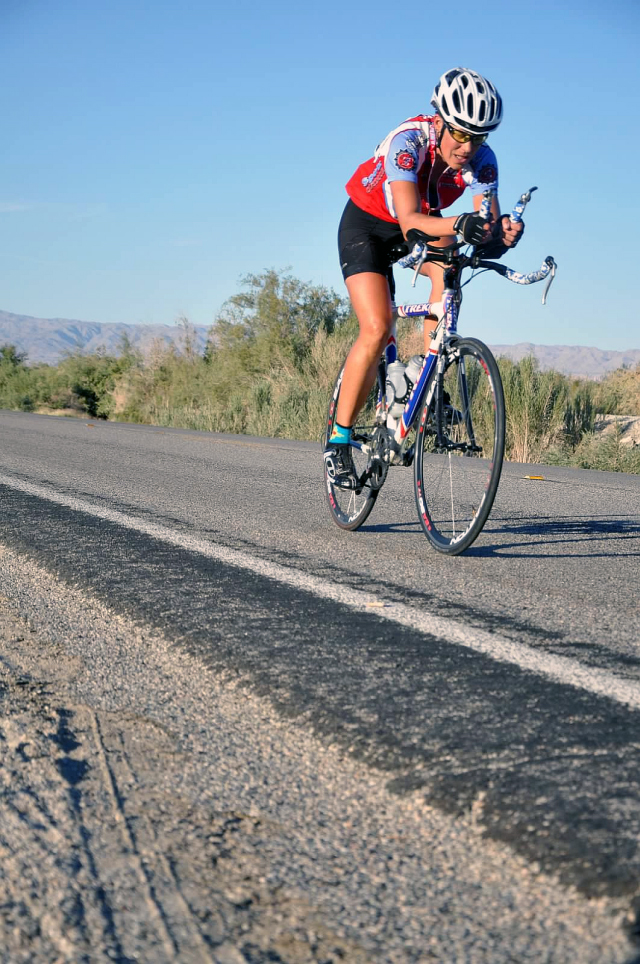 In November, she qualified to participate in the 3,000 mile non-stop Race Across AMerica – RAAM. She will start in Oceanside, Calif., June 11 and finish in Annapolis, Md.

RAAM is a race, but unlike the three great Europeon Grand Tours (Tour de France, Vuelta a Espana and Giro d’Italia), RAAM is not a stage race. RAAM is one continual stage, similar to a time trial. Once the clock starts it does not stop until the finish line.

RAAM is about 30 percent longer than the Tour de France. Moreover, racers must complete the distance in roughly half the time allowed for the Tour.

Racers will ride 250-350 miles a day, balancing speed and the need for sleep. They have a maximum of 12 days to complete the race, with the fastest finishing in just over eight days.

Dougherty has worked at LANL since 2006 when she was hired as a postdoctoral associate. She is married to Gene Dougherty who also works at LANL, and the couple has two children, Allegra and Sean, both Barranca Mesa Elementary School students.

When she was in graduate school at the University of Illinois in Urbana-Champaign from 1995-2001, Dougherty raced bicycles with the school’s National Collegiate Cycling Association (NCCA) team as well as with a number of midwest cycling teams.

In 1996, she competed in her first ultramarathon cycling event, the 573-mile Bicycle Across Missouri (BAM) race, finishing first among the women in just over 49 hours.

“At that point, I was bitten by the ultramarathon cycling bug and competed in the 24-hour World Cycling Championship in Iowa every year from 1996-1999, finishing first among the women in 1997, 1998 and 1999,” Dougherty said. “I took a break from competition in 2000 when Allegra was born, but raced the 508-mile Furnace Creek 508 RAAM Qualifier in 2001, finishing 2nd among the women. I took another break in 2002 when Sean was born, but came back in 2003 to win the Furnace Creek 508 race. I raced shorter distance events for a while and then focused on my family and new job at LANL for several years.”

In 2009, Dougherty decided to give ultrarunning a try and competed in the Leadville 100 Trail Run. She finished the race, but missed the 30-hour official cut-off by 1 minute, 2 seconds. For a year, she was haunted by this and came back in 2010 and 2011 to officially finish the race.

The success Dougherty experienced in ultramarathon cycling eluded her in ultrarunning, and the abuse of the long distances was destroying her joints, so she returned to cycling.

Success at work also eluded her, she said, adding that her frustration with work was affecting her husband and children.

“I was bringing all of us down, and I needed to change that. Since moving forward at work was outside my control, I decided to focus on something I could control and something that brought me success in the past – ultramarathon cycling,” Dougherty said. “When I qualified for RAAM in 1996 with BAM, I swore that I would one day, perhaps in my 40’s, compete in RAAM. Now, in my 40’s, the time seemed right to race RAAM. I asked my husband if he would be willing to support me, and, to my amazement, he said ‘yes.'”

That was in June 2012. In November, Dougherty competed in the 24-Hour World Time Trial Championships in California, a RAAM Qualifier race, and qualified for RAAM with a distance of 416 miles.

Her husband Gene and the couple’s good friend, Jim Wilson, supported Dougherty as her crew during the race. Gene will be her crew chief at RAAM, and she has one other confirmed crew member but needs at least six in the crew, so she is looking for “adventurous souls to join in a journey they will never forget.”

“My favorite sports nutrition company, Hammer Nutrition, has agreed to sponsor me in 2013, which is a huge honor and financial benefit,” Dougherty said. “Without their sponsorship, I would still use Hammer Nutrition products, but, due to the volume of product I use during training and racing, the sponsorship discount is invaluable.”

Veloforma Bicycles also stepped up as a sponsor this week so Dougherty can compete in RAAM on their state-of-the-art Strada IR bicycle.

Dougherty explained that RAAM is “too huge” to do as a race and nothing more, so she has worked out an agreement with Los Alamos Public Schools Superintendent Dr. Gene Schmidt and the individual school PTO’s to use her participation in the race to raise money for the local schools.

“We are registered as Team Los Alamos Schools and have established a fundraising account with Los Alamos National Bank [account # 01-467034-01] where donors can deposit money that will go directly to the schools,” Dougherty said, adding that 100 percent of the funds raised will be divided equally between the seven Los Alamos schools and deposited in non-profit accounts.

Donors also can contact Dougherty through her webpage http://www.lmdougherty.com to offer donations contingent upon her completion of the race or any part of it.

“The biggest reason for my participation in this race is to stop dragging my family down and lift them up instead,” she said. “We have adopted the theme “Be the Change” (from the song “Fly on the Wall” by Thousand Foot Krutch.) Rather than hope for change, I decided to ‘Be the Change’ by taking on the biggest athletic challenge of my life. I hope that my participation in RAAM will encourage other people, especially young people who need role models, to stretch themselves to become more than they are.”