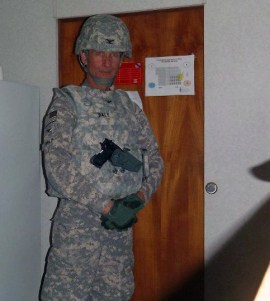 Dr. Paul Daly, a Family Practice physician with Medical Associates of Northern New Mexico in Los Alamos, recently returned from his fourth mobilization as an Army Reserve medical officer. During this deployment, Dr. Daly was assigned to the 310th Expeditionary Sustainment Command (ESC) Brigade as their Command Surgeon.

The 310th ESC is  based out of Indianapolis, Indiana, but draws soldiers from several neighboring states. The function of an ESC is to provide combat services support. This entails assuming command and control of smaller logistics units, brigade and battalion level, already within a combat theater. These services include: supply, maintenance, transportation, field services, medical, general engineering and construction, as well as escort and security details.

The 310th ESC reported for duty in Iraq in early 2011. Its mission was to provide combat services support while United States Forces – Iraq (USFI) was transitioning from Operation Iraqi Freedom (OIF) to Operation New Dawn (OND). This being the final steps in preparing Iraqi troops to assume full command and control of Iraqi security. The draw-down had already begun prior to the 310th ESC assuming command from the 324th ESC; the previous combat support command. However, there was still much to be done with over 50,000 troops in Iraq.

This daunting task was quickly accepted by the 310thESC as it stationed itself initially at Joint Base Balad in central Iraq.

The 310th had to co-ordinate and control the movement of troops as well as hundreds of thousands of pieces of military vehicles and other gear from several large and multiple small bases scattered through out Iraq. The timing of this became even more critical as the US and Iraq could not come to an agreement over leaving a small training contingent of troops within Iraq. Therefore, all troops and equipment had to be out of Iraq by the end of December 2011; no small feat for the 310thESC.

Dr. Daly serves as a Colonel in the Army Reserve. As mentioned, he was assigned as the Brigade Command Surgeon to the 310th ESC. He reported for this duty at the end of September 2011 while the 310th command staff was transitioning to Camp Buehring, Kuwait. This being the main base to which all personnel and equipment within Iraq were moved.

Colonel Daly’s functions as a Command Surgeon were to provide medical expertise and oversight to the command staff of the 310th ESC. He also oversaw operations of subordinate medical units, Combat Army Support Hospitals, Forward Surgical Teams, and Battalion Aid Stations, that were in Iraq providing medical care for troops who were also still within Iraq. His duties included monitoring and providing daily briefs to the command staff regarding injury reports, infectious disease issues, blood utilization and other medical supply needs.

During his tenure at Camp Buehring, Dr. Daly also utilized medical units exiting Iraq to establish a Battalion Aid Station (BAS) to provide direct medical care to command staff personnel as well as those soldiers coming to Kuwait from Iraq. 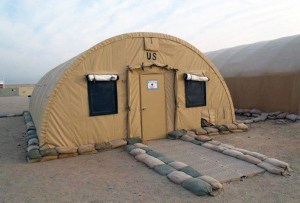 In spite of almost overwhelming numbers of vehicles, equipment, and supplies that were needed to support troops and bases within Iraq the 310th ESC was able to complete its mission ahead of the scheduled final withdraw date of 31 December, 2011. USFI commanders felt that this logistical feat was the single most significant movement of troops and equipment since World War II and set a very high standard for future similar operations.

The 310th ESC Brigade was therefore able to return its troops home early. Being in the command element Dr. Daly was one of the last of its members to return to the US. He arrived home on Christmas Eve.

Dr. Daly looks forward to seeing his patients at MANNM again after a short vacation with family. He would like to thank all his patients and the providers and staff at MANNM for their support and understanding without which he could not continue his efforts within the Army Reserve.