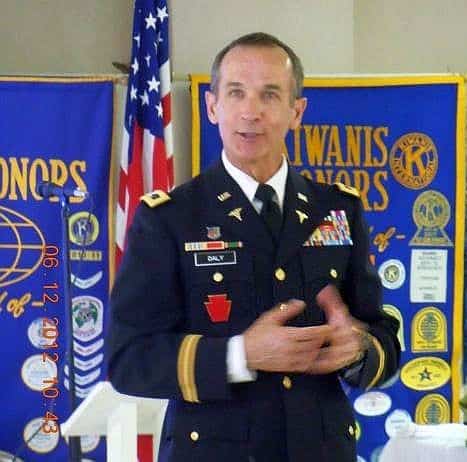 Dr. Paul Daly, MD, spoke to the Kiwanis Club of Los Alamos during a recent lunch meeting about his military experiences in Iraq.

Daly lives in White Rock and is a colonel in the Army Reserve. He returned in late December from his fourth mobilization.

During this deployment, Daly was assigned to the 310th Expeditionary Sustainment Command (ESC) Brigade as its command surgeon.

The 310th ESC is based out of Indianapolis, Ind., but draws soldiers from several neighboring states.

The function of an ESC is to provide combat services support. This entails assuming command and control of smaller logistics units, brigade and battalion level, already within a combat theater.

These services include supply, maintenance, transportation, field services, medical, general engineering and construction, as well as escort and security details.

The 310th ESC reported for duty in Iraq in early 2011. Its mission was to provide combat services support while United States Forces – Iraq (USFI) was transitioning from Operation Iraqi Freedom (OIF) to Operation New Dawn (OND.)

This being the final steps in preparing Iraqi troops to assume full command and control of Iraqi security.

The draw-down had already begun prior to the 310th ESC assuming command from the 324th ESC; the previous combat support command.

Daly told Kiwanis members who packed the meeting room at the Trinity on the Hill Church about his 4th rotation.

For surgeons, the rotation is a 90 day boots on ground. Daly’s responsibilities included briefing generals on medical needs and battle injuries.

When he arrived in Iraq in October, there were 50,000 troops still to get out by the end of December. Initially the troops moved down to Kuwait City and then on to ships for home.

While in Iraq, Daly said the majority of the patients he treated either suffered from food poisioning due to the harsh conditions or battle injuries.

The assaults switched from attacks on American troops to attacks on other Iraqis. One problem the convoy encountered was lasers being used to temporarily blind the drivers.

He also informed the audience that there was an alarming rise in American solider suicides.

A new Kiwanian, Abe Dispennette was in Iraq at Camp Adder at the same time as Daly.

Dispennette served as an army chaplain and said that his work included counseling soldiers to help them deal with battle fatigue and attempt to reduce the risk of battle fatigue related suicides.

Dispennette is taking over the State Farm Agency in Los Alamos from former agent Sue Hofmann, who recently retired.

In addition to his four deployments in Iraq, Daly’s numerous military accomplishments included assisting in the evacuation of Saigon and receiving the Humanitarian Service Award for his work in Bosnia treating chilidren injured by IEDs.

Daly specializes in Family Practice  with Medical Associates of Northern New Mexico and has a special interest in wilderness and sports medicine.