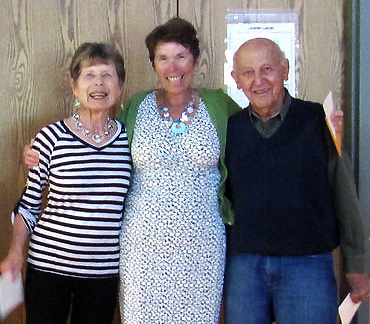 Three Los Alamos bridge players recently achieved Life Master status in the American Contract Bridge League. In a recent regional tournament held in Taos, attended by nearly 600 players from all over the US and Canada, Marge Agnew, Ann Marie Graves and Joe Bergstein won events that enabled them to earn the final gold masterpoints they needed to become Life Masters. All three have played duplicate (competitive) bridge locally for several years.

Agnew was born in Sioux Falls, S.D. She learned the mechanics of bridge while in high school. She came to Los Alamos to teach music after graduating from college. Like many players, she took a hiatus from bridge until she retired. After starting to play duplicate bridge, Marge gradually earned the masterpoints she needed playing in local games, and in sectional and regional tournaments.

Graves was born and raised in Halifax, Nova Scotia. She earned a degree in psychology and moved to Los Alamos about 13 years ago. Married with four children, she took up bridge so she could have something to do with her son, who started taking bridge lessons in the fifth grade.

Bergstein was born in McKeesport, Penn. in 1923. After serving in the U.S. Army from 1941 to 1946, he attended college in Virginia and Tennessee and moved to Los Alamos in 1953, where he worked as a physicist until 1987. On a whim, he picked up a copy of “Goren on Bridge” in 1964. After reading the first 32 pages, he was hooked. He gave up poker, and started playing duplicate bridge with his brother Chick.

Attaining Life Master status takes time and skill. It requires successes not only locally, but also in sectional and regional tournaments. The latter are the most difficult, as the competition includes very good players ─ sometimes national champions.

To recognize the three Life Masters for their achievement, the Los Alamos Bridge Club recently held a party and bridge game in their honor, attended by about 50 local players.

The Los Alamos Bridge Club has been active since the early 1950s. Four duplicate bridge games are held weekly; three in the Betty Ehart Senior Center, and one at the White Rock Senior Center.

Bridge classes are often available for those who would like to learn to play. For more information, contact Cliff Rudy (662-1630 or crrudy@cybermesa.com) or Jerry Fleming (662-3036 or peanutcat@aol.com).