Local Author Liddie Martinez and husband Rick’s Española Valley farm produces food for their table and to share. She will talk about the history and traditions of food in NNM at 7 p.m., Aug. 5 at Mesa Public Library. Photo by Liddie Martinez

Liddie Martinez is a writer, historian, farmer, extraordinary cook and president of the Los Alamos Region and director of community engagement at Enterprise Bank & Trust. Those who know Martinez when she’s wearing one hat, may not realize her expertise extends to many other roles.

Martinez will share the story of food in northern New Mexico with a Los Alamos audience as part of a collaborative effort of the Los Alamos Public Library and Los Alamos Historical Society, 7-8 p.m. Thursday, Aug. 5 at Mesa Public Library’s upstairs rotunda.

She’ll take the audience on a journey, tracing foods and recipes from Spain through Mexico’s Aztec Empire, and its arrival in the Española Valley in 1598 and how she lives these traditions as a farmer and as a cook.

Martinez belongs to a family with deep roots in northern New Mexico. She learned farming and cooking from her mother and grandmother.

“Cooking brings me close to the feeling I had with my grandmother,” Martinez said. “It’s a close connection to her. She’s right at my shoulder.”

Martinez grew up in the restaurants where her mother and grandmother worked.

“I’ve always worked,” she said. “I started waitressing when I was 11. I learned about raising animals and gardening from my family. Farm to table is an old concept here. When the Spanish arrived in El Rito, they were sheepherders. While the men were occupied with that, the women ran the farms. I’m still living that tradition.”

“We owe a great debt to the incredible individuals who have devoted their lives to documenting our history,” she said. “Women have not been targeted for support until recently. It’s nice to see that changing.”

Martinez learned a great deal about the history of food from her work on the establishment of El Camino Real de Tierra Adentro National Historic Trail and met many people with whom she continues to collaborate. Dr. Teresa Cordova invited Martinez to participate in Las Pistoleras Instituto Cultural de Arte’s Field Class, part of the Enriqueta Vasquez Digital History Project. The class explored the history and development of Chicana feminism, especially in Northern New Mexico, at UNM-Taos this spring.

“Liddie is so good at everything she does,” Cordova said. “It’s an honor to have her as part of our project. She gave a wonderful presentation on the history of food in our region and on the traditions of farm to table. The students were blown away.”

Martinez will share this living history of food in northern New Mexico in her Los Alamos talk.

“Very few people know that chile was not used in New Mexico before the Spanish arrived,” she said. “There was no chile found at Chaco Canyon. The native people didn’t import it from Mexico because they didn’t like it!”

The Spanish, who adopted native foods in Mexico, brought chile with them. They also began eating food such as blue corn that was native to the region that became New Mexico.

“Food traveled in both directions,” Martinez said. “That’s the thing about food. It’s unique to each group of people. Bringing traditional dishes to your table is sharing yourself. Food is very personal.”

Martinez has a popular monthly food column in the Los Alamos Daily Post where she shares traditional Northern New Mexican recipes with her readers. She is passionate about cultural preservation, and in 2019 published a cookbook documenting historic Northern New Mexican recipes that have been passed down orally in her family, generation to generation, over the last four centuries.

“It’s becoming more difficult to grow food because of lack of access to land and water,” she said. “There is no more risky business than farming. We have to expect to lose 30 percent of our crop.”

“Chile plants are growing at the space station,” she said. “A NASA scientist from Chimayo provided the seeds.” 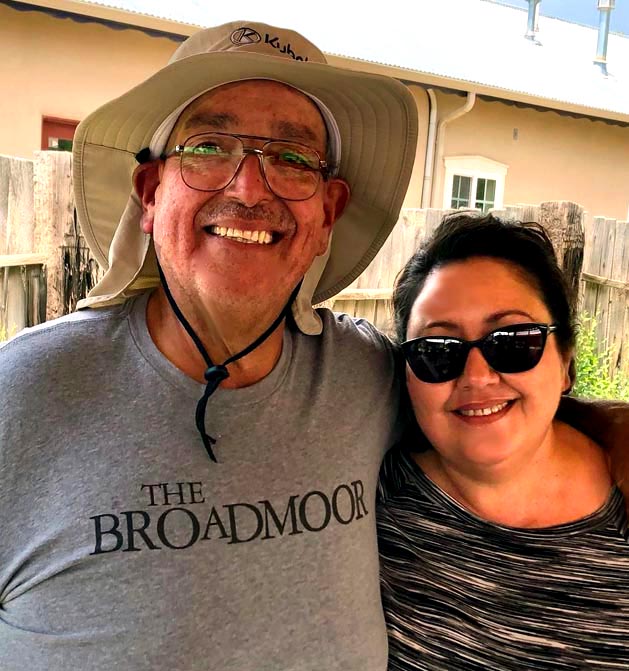