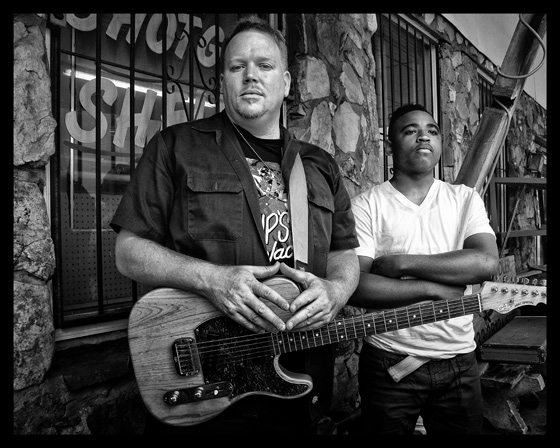 Don’t worry about the fences. In spite of construction at the Pond, the show will go on. There’s plenty of room in the grassy area on the west side of the Pond, the site of the former Municipal Building.

Delta Blues goes back to the origins of the blues. Lightnin’ Malcolm, one of the future greats, is a man who understands, respects and loves the genre. Malcolm has been touring the country since his late teens. He would play both day and night.

“Music has been on my mind since six or seven, but it took till my teen years to start getting around on my own, and, you know, putting it into action,” Malcolm said. “I played mostly solo then, singing, playing guitar and kick and snare drums with my feet as a one man band.”

Lightning Malcolm was born in Mississippi, grew up in Missouri. He currently lives in the Delta.

This cat has a great story. He’s played with some of the greatest of the Delta singers. He toured with R.L. Burnside. He played Los Alamos a few years ago with R.L.’s grandson, Cedric. That was a great fundraiser concert for the Series that we had at the Blue Window—a fantastic show.

He toured with Muddy Waters’ band members such as Hubert Sumlin and Honeyboy Edwards as well Mississippi legends, T-Model Ford (Ford’s grandson, Stud will accompany him this Friday on drums), Otha Turner, Jessie May Hemphill, Paul Wine Jones and others.

Someday, remind me to tell you about the outrageous concert we had when T-Model Ford and Paul Wine Jones played Mari-Mac shopping Center. To this day, I believe that T-Model Ford is probably the only person to play our stage that committed a murder.

Lightnin’ Malcolm has played thousands of gigs at the best and the funkiest of America’s juke joints. He talks about how he’d walk in and everybody would be dancing to Al Green or some other fabulous Memphis area soul man on the jukebox. The bartender would shut off Al Green and send up our man.

This was how he was making his living. “…Failure wasn’t an option…you had to win them over with the first song or you wasn’t gonna get another try! Guitar solos weren’t important but bass lines and rhythm was mandatory for the dancers, and you had to sing with everything you got and once you won them over you was ‘bout to have the greatest night of your life!!”

Some of the people that are keeping this sound in our lives include the Black Keys, Jack Black of the White Stripes, the North Mississippi All Stars, the Kimbrough family, the Burnside family and Lightnin’ Malcolm.

Mississippi Delta blues artists were a major influence on the British Invasion of the 1960s. This Invasion led to the birth of early hard rock. Listen to Junior Kimbrough play “All Night Long” on YouTube and you’ll surely understand what Led Zeppelin was listening to before they got their airplay.

Listen to Lightnin’ this Friday night, close your eyes and you’ll think you’re listening to a five or six piece band with Lightnin’ playing lead and rhythm guitar, bass and percussion and Stud on the drum kit. They’ll be playing Mississippi Hill Country and Delta blues fused with modern funk, reggae, soul and rock.

Malcolm is also touring these days with the No. Miss. Allstars, a great band if you love the very popular Black Keys. Check out all these bands on YouTube. Check out www.lightninmalcolm.net and of course, www.gordonssummerconcerts.com.

Next week on June 21, we’ll be at the Ski Hill with another Mississippi blues band, the incomparable, Homemade Jamz’ Blues Band for Pajarito Ski Hill Night. Visit them online at www.hmjamzbluesband.com.

June 28, we’ll be back at Ashley Pond with the Nashville rock band, SIMO. These guys remind me of the 60s and 70s bands like Cream, The Who and Hendrix meeting above the Black Keys and White Stripes. This will be Los Alamos Monitor 50th Anniversary Night. Check out wwwsimotheband.bandcamp.com.

I’ll see you at the shows.