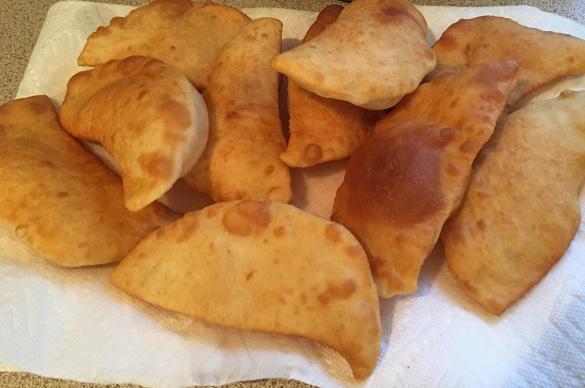 By LIDDIE MARTINEZ
Espanola Valley
After the summer has faded from memory and the harvest has been gathered, processed and tucked away for the winter, I begin unpacking the quilts, finding my sweaters, covering up the BBQ grill and bringing the cooking back indoors. Sopapillas are one of those delicacies that I do not attempt to make during the summer; it is just too hot to stand in front of a hot pan of oil for any length of time, but with cooler temperatures setting in, it is one of the first things I want to make.
Origins of Sopapillas can be attributed to Córdoba, Spain and an olive oil dipped pastry called sopaipa which is said to have influences from the Moors who occupied the Iberian Peninsula for nearly four centuries. Our Sopapillas are more delicate versions that resemble fluffy pillows and are hollow and perfect for filling with savory ingredients or with honey or homemade jam. Sopapillas were invented in New Mexico and they are always a welcomed sight whether they are used as bread to accompany a delicious meal or as a sweet ending to your meal drizzled with sweetness.
There are two schools of thought on Sopapillas in northern New Mexico, those who believe they should be made with yeast and those who believe they should be made with baking powder. Both versions are delicious and both will puff up to create the hollow pillows but they do have very distinct flavors. Each faction swears by their recipe and, truth told, I love them both, although I was raised on the baking powder version. What I can fess up to is that I crave that yeasty aroma so, that is the one I am sharing.
You will need a deep vessel that will accommodate at least 2-3 inches of hot oil with ample room to avoid spillovers. The secret to making them puff up is to dunk them once or twice with the back of your slotted spoon after you have gently slipped them into the hot oil.
Ingredients
4 cups flour
2 Tbs. lard or bacon grease (yes, you can substitute with oil or shortening)
1 ½ cups warm milk
2 tsp. dry yeast
1 ½ tsps. Sugar
1 tsp. salt
2 cups oil for frying
In a small bowl, dissolve yeast in warm milk and set aside. In a large bowl, combine dry ingredients then add fat and rub into flour mixture between fingers until it has been incorporated.
Make a well in the center of the mixture and pour in milk and yeast. Stir into flour using hand, raking fingers across the bowl until a dough ball begins to form. Knead on counter adding a dusting of flour as needed. Dough will be slightly sticky.
Grease your large bowl before placing the dough ball back into it and cover with plastic wrap. Allow dough to double in size while it rests in a warm spot- about 1 hour.
Punch dough down and make 10-12 small dough balls on counter and cover them with a tea towel while you roll out one at a time. Heat oil in a deep skillet.
Roll out dough ball into a disk about 1/8 inch thick and cut in half or in quarters, depending on the portion desired. Slide two or three sopapillas at a time into your oil but do not crowd your pan. Using a slotted spoon, gently dunk each sopapilla once or twice to encourage puffing. Turn carefully after a few seconds when golden brown color is achieved. Drain on paper towels.
Serve warm as a side or with honey or jam. 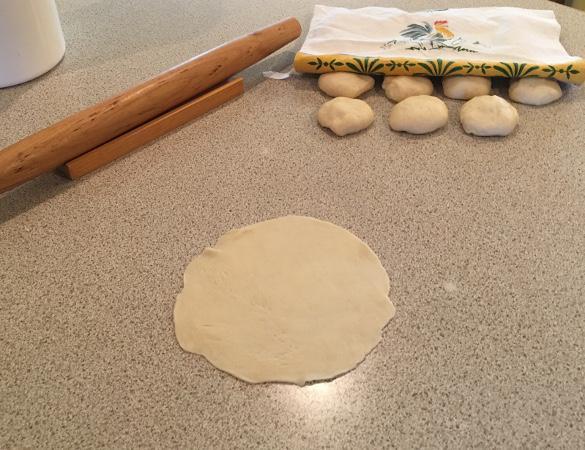 Sopapillas in the making. Photo by Liddie Martinez 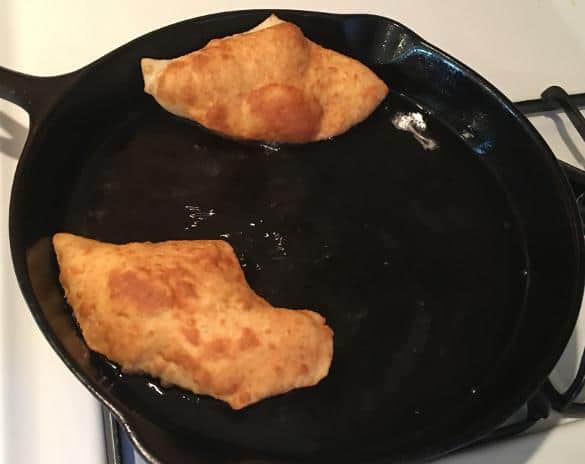